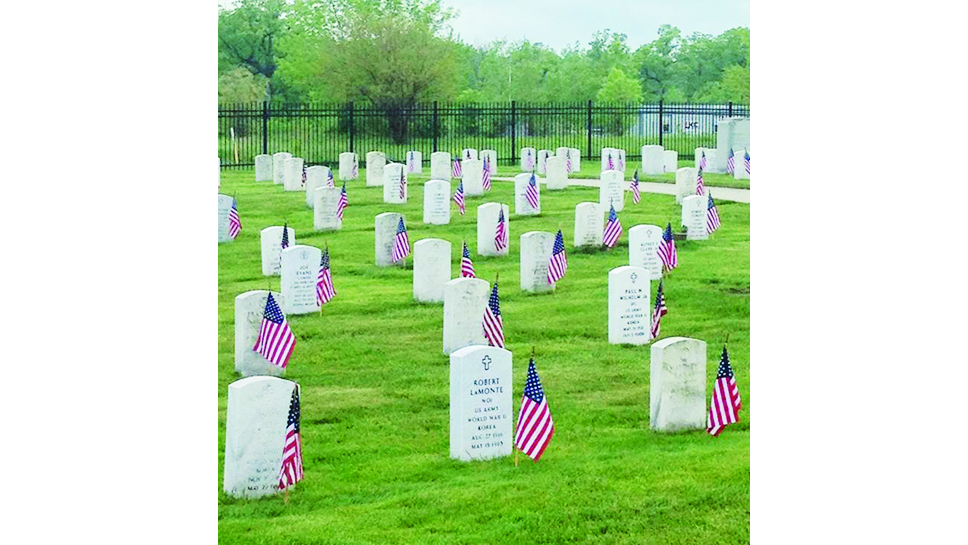 The heartfelt power of symbolism centers on shared special moments—the salute of old soldiers, the chords of a song, and the summoned memories of heroism.

As Lake Forest’s McKinlock Post 264 of the American Legion observes its 100th year of supporting veterans and our local community, it wants to make sure everyone remembers the powerful shared moment of Memorial Day and its ongoing efforts to preserve the stories of veterans and those lost to war.

Post 264’s leaders are asking the community to join them Friday, May 24, and Saturday, May 25, to share in placing tiny American flags at the front of each veteran’s headstone at the four local cemeteries the post tends on Memo- rial Day.

On Memorial Day, flags will be available at Market Square in downtown Lake Forest at 6 a.m.

Though both civilian cemeteries have many veteran gravesites, the Fort Sheridan 6.85-acre plot is home to 2,649 final resting spots, almost all American soldiers including three who served with George Armstrong Custer in the 7th Cavalry. There even are nine German POWs who died in U.S. captivity during World War II at Sheridan and Camp Grant near Rockford.

The flag sharing launches Lake Forest and Lake Bluff ’s civic celebration of the day for veterans and their families. The main event is scheduled in Market Square on Monday at 11 a.m.

The ceremony will include Commander Carl Kirar of Naval Station Great Lakes as the featured speaker. Music is provided by Lake Forest High School’s music department, and a short parade will follow from City Hall at 10: 45 a.m. featuring color guard, local scouting organizations and the Lake Forest High drum line.

Lake Forest Post 264 was chartered on October 28, 1919, and is part of the nation’s largest wartime service organization with 2 million members at 12,875 posts.

The day—and remembering its origins—has special meaning for Post 264. It’s named after Lake Forest’s Lieutenant George Alexander McKinlock Jr., who died at the Fields of Flanders during World War I. McKinlock, who was with a machine gun group in France, was believed to be the first Lake Forester killed in action during World War I.

His mother, Marion, visited the battle site to find his body, and wandered the rows of burial sites without success. As she later recounted, she was tired and sat down near a cross with an Army helmet on top. She turned over the helmet, and found her son’s name inside.

George Alexander McKinlock Jr., Harvard Class of 1916, was killed in action in France on July 21, 1918. She didn’t find his gravestone because the Army had misspelled his name as “McKinlow.” He is buried at Lake Forest Cemetery.

Memorial Day’s flags remember him, too.

For more information about the McKinlock post and this weekend’s festivities, visit americanlegionlakeforest.org.