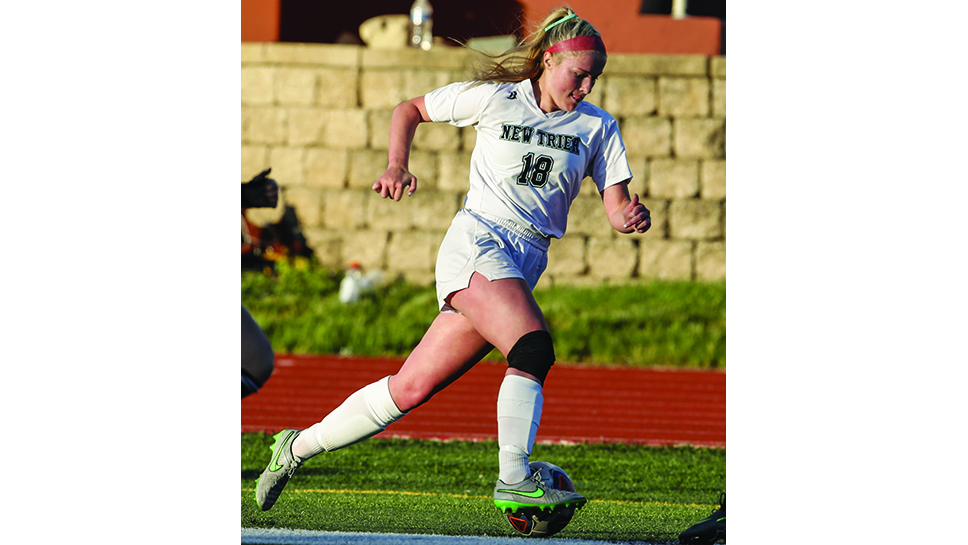 Emma Weaver, with a soccer ball at her feet, stopped abruptly in a home match last weekend in chilly Northfield. The New Trier High School junior forward/midfielder then cut sharply, before nimbly tap dancing—while still in control of the ball—her way past an overmatched defender.

She then slowed down, shifted gears again, and scorched turf around another defender.

You watch Weaver play. You catch your dropping jaw. You think, “Not fair.”

Elite running backs looking for daylight in a football game would love to possess Weaver’s electric moves in futbol games.

“Emma has everything you want in a soccer player, and tonight she did a great job of spitting the ball wide to her teammates,” he added after Weaver, a reliable corner kicker, struck for a goal and delivered an assist in NT’s 3-0 defeat of visiting Fremd High School on May 10. “But she’s still thirsty to learn more and to get better. She was in my office today, watching film.”

NTHS girls soccer fans can’t wait to view the Trevians’ Class 3A playoff run this spring. It has blockbuster potential. It has a good chance to end in June—again. Burnside’s crews, after all, finished second, second, first, first, first in the last five state tournaments.

New Trier (17-2-5), seeded No. 1 in its sectional, was scheduled to face Taft High School May 14 in a Class 3A Maine West regional semifinal in Des Plaines.

“They just get the job done,” Burnside said of his 2019 booters. “I’m not always sure how they do it, but they will their way. Fun to watch, and they’re good, hardworking kids. We had great energy tonight [vs. Fremd, in the regular-season finale]. They played for the seniors on Senior Night.”

A Villanova University recruit since her fresh- man year and the team leader in assists (22, in 27 matches) a year ago, the 5-foot-7 Weaver blasted a free kick to open the scoring against Fremd’s Vikings (11-4-3). The ball entered the upper-right corner of the goal structure with 8:47 remaining in the first half and elicited a lively reaction from the public address announcer at Robert Naughton Field: “A magisterial strike by Emma Weaver!”

New Trier made it a 2-0 contest at the 29:21 mark of the second half on a header by senior midfielder and co-captain Lily Conley. Senior defender Julia Goldish got credit for the assist via a head flick.

Sophomore forward Alex Wirth capped the scoring nearly 10 minutes later after a well-placed delivery from Weaver, who was named a 2019 Allstate All-American earlier this month.

Only 250 junior soccer players in the country earned the inaugural recognition. Eighty athletes from that pool will be selected in June to compete in this summer’s Allstate Cup during Major League Soccer’s All-Star Game week in Orlando, Florida. The players will be split into teams coached by celebrity soccer legends Julie Foudy, Brandi Chastain, Brian McBride, and Taylor Twellman.

“Emma is our most dangerous player, with her speed, with her foot skills, with her high soccer IQ,” said Trevians senior defender Josie Crumley, a “defensive game-changer who does a phenomenal job for us,” Burnside noted.

“Emma has stepped up,” Crumley continued. “She is such an important player on our team.” The tireless, tough Conley, meanwhile, has turned into an off-screen version of Wolverine, the Marvel Comics character who has appeared in three movies. The character owns a spectacular regenerative ability, among other powers. Burnside compared Conley to the X-Men superhero last weekend.

“So fast. She got cleated not too long ago and had to deal with a serious leg scar. She also recovered quickly after a high-ankle sprain. She has an incredible pain tolerance.”

That qualifies as incredible, too. NT’s shutout of Fremd was its ninth in its last 10 matches. Goalkeeper Meghan Dwyer—one of seven NT seniors honored, with their parents, at halftime on May 10—made her best save of the night in the final minute, leaping quickly to her right and using both hands to turn aside a high, blistering shot.

New Trier’s fans sitting in the stands and standing closer to the pitch then used their mitts to applaud the stop.

“Megan is one of our team’s role models, along with Lily [Conley],” said Weaver, a hip-hop and ballet dancer at a young age before opting to expend most of her energy on soccer stages.