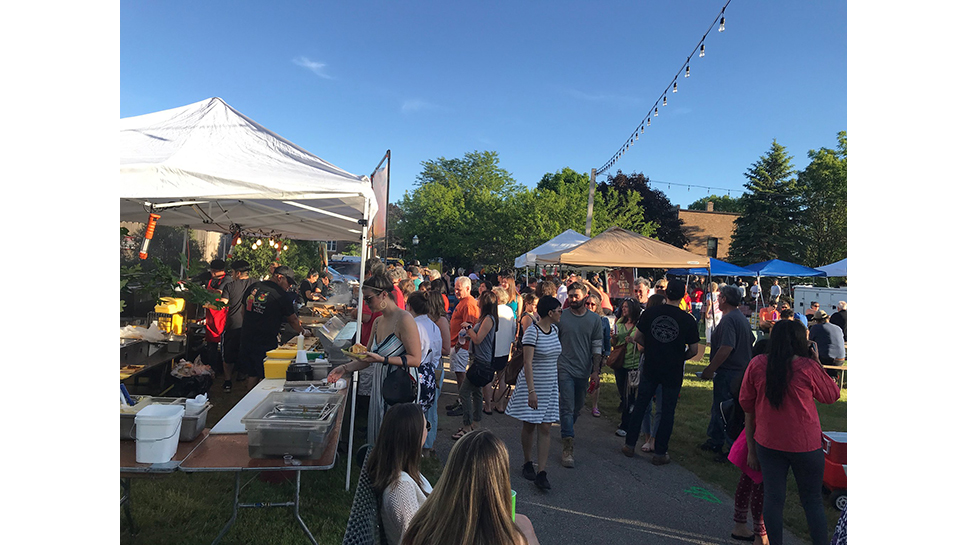 Highwood’s evening gourmet market is not your ordinary farmer’s market. For the past 11 years, the Wednesday festival has brought together live music, restaurants, food trucks, and vendors of many types in a family-friendly setting.

“It is the hottest happening place on the North Shore on Wednesday evenings,”says Ilyse Strongin, a spokeswoman for Celebrate Highwood, a 501(c)(3) organization dedicated to putting on events in Highwood. “There is something for everyone, from young kids to young adults to adults of all ages. People come from near and far to enjoy free live music, eat, drink, and dance in the great outdoors.”

The market will kick off its 2019 season at Everts Park (130 Highwood Avenue) on June 5 and run through August 28.

Strongin says the market has grown over the years. It started out with 12 vendors at City Hall Park. It picked up more vendors with each passing summer, and they had to move it to Everts Park in 2012 to accommodate its expansion.

There are now more than 60 market vendors with such items as handmade jewelry, fashion, and art as well as artisan breads, cheeses, sauces, pastas, and sweets. Local restaurants offer freshly prepared dishes and creative cocktails from the booths, and there are also food trucks.

“We’re a market of eclectic vendors,”Highwood alderman and Celebrate Highwood President Eric Falberg says.“You could have full dinners out there. No one cooks on Wednesday nights anymore. They all just come out to the market with their families.”

Falberg had the idea for the market around the time Celebrate Highwood was launched.

“A group of us got together to form Celebrate Highwood, and we wanted to do a market,” Falberg says.

Run entirely by volunteers, the market has grown in popularity since its start. Expect to see about 2,000 people on any given Wednesday evening this summer.

“It’s nice for people in the middle of the week to have something they can look forward to,” Falberg says. “We get people from as far down as Evanston and as far up as Kenosha, and from as far west as Buffalo Grove.”

“People come off the Metra, families meet for dinner after work, friends gather to enjoy each other’s company,” Strongin says. “It is a destination for food and fun on Wednesdays.”

The market will run from 4:30 to 9:30 p.m. on Wednesday evenings throughout the summer. There is no evening market on Wednesday, July 3.

“We always want to bring in new vendors, so there’s always something different,” Falberg says.

“And the music is phenomenal.”