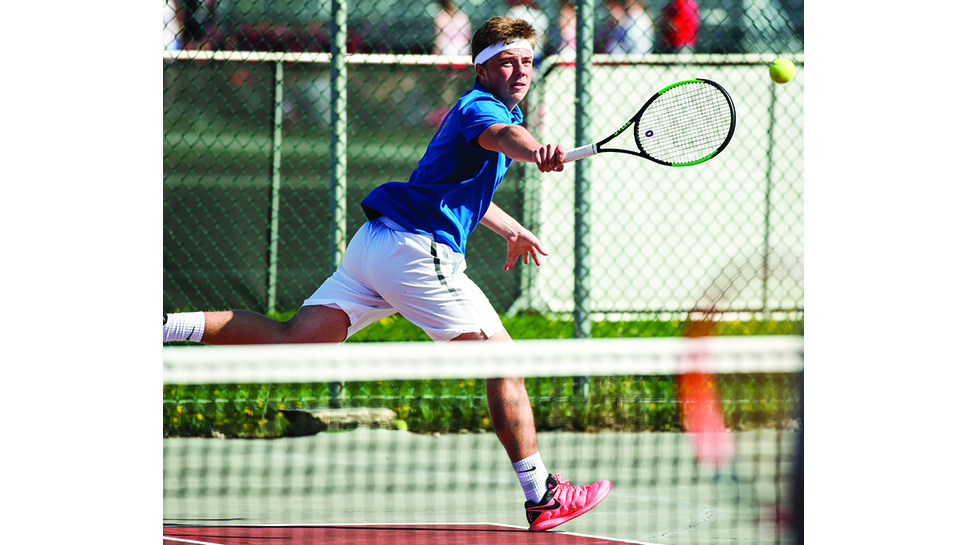 OLÉ, OLEKSYI: Lake Forest High School senior Oleksyi Vyshyvanyuk, seen here in action last spring, finished sixth in doubles (with then-senior Yusef Alsikafi) at the Class 2A boys tennis state meet in 2018. He has been paired with classmate and fellow co-captain Will Zordani in doubles this season. PHOTOGRAPHY BY JOEL LERNER

Oleksyi Vyshyvanyuk knows exactly what to say when a teacher looks at his surname on the first day of classes and stammers while attempting to pronounce it during roll call.

“I interrupt the teacher and say, ‘Here,’ ” says Vyshyvanyuk, whose lengthy Ukrainian last name might have been spelled out once in a game of Scrabble—perhaps after an earthquake thoroughly scrambled the letter tiles that had formed acceptable words on the board.

The 5-foot-11, 180-pound Vyshyvanyuk, a Lake Bluff resident, is well on his way to earning another letter—a varsity letter—this spring as one of the Scouts’ top doubles players for the second year in a row. He and Yusef Alsikafi (a 2018 LFHS graduate) finished sixth in doubles at the Class 2A boys tennis state meet last year.

Co-captain Vyshyvanyuk and senior co- captain Will Zordani collaborated for a runner- up finish in the 1st/2nd doubles flight at the Deerfield Invitational last weekend.

“Oleksyi’s one-handed backhand return is unbelievable, one of the many effective shots he has in his tool bag,” Lake Forest assistant coach Scott Gilbert says. “His backhand’s timing and precision, especially when he’s returning a serve, are outstanding. His hands? They’re quick; they’re great.There’s a lot to like about Oleksyi and his game. He always listens, and he always wants to get better.”

Vyshyvanyuk’s tennis career got off to a rather inauspicious start at an outdoor facility in Park Ridge. He was 5 or 6 at time, taking his first private lesson. The beginner’s first swing resulted in a prodigious home run, which is a good thing in baseball but a concern in tennis.

“The ball flew out, way out,” recalls Vyshyvanyuk, a regular at United States Tennis As- sociation tournaments in the summers and a state qualifier in singles (he won three of five matches) as a sophomore. “The very first ball I hit went over the fence. (He did not flip his racket. He did not run joyously around the court).

“The instructor,” he continues, “then came over to my side of the net and showed me how to grip the racket properly. The next ball I hit was better; it stayed in.”

His interest in tennis booted his involvement in soccer to the sideline for good. But Vyshyvanyuk continued to play basketball—a sport he still enjoys today as a recreation. Among his strengths in that court activity is his three-point

shot. While playing basketball in the eighth grade, Vyshyvanyuk sustained a serious injury to the knuckle below his left ring finger.

It ended up helping his tennis game because it forced him to abandon his two-handed back-hand and develop a one-handed groundstroke from that side.

Few prep tennis players rely on a powerful one-handed backhand as often as Vyshyvanyuk does. His version of the weapon, struck often with little topspin, typically handcuffs opposing players at the net; it barely clears the court divider, and if a foe manages to prolong the point with a volley, the ball, more often than not, comes back feebly to Vyshyvanyuk’s side of the court. That then allows either Vyshyvanyuk or his partner to blast a finishing volley or overhead.

Swiss professional tennis player Stan Wawrinka, who has won three Grand Slam titles and was ranked No. 3 in the world in early 2014, is Vyshyvanyuk’s favorite pro. Wawrinka’s top shot?

It’s a thing of beauty when the 34-year-old executes it cleanly. It’s elegant and potent—at the same time.

“Oleksyi has perfected the shot,” says Scouts tennis coach Corky Leighton, whose squad placed fifth (28 points) at the eight-team, highly competitive Deerfield Invite on May 4. “There’s no hesitation when he hits his one-handed backhand. His mindset when he’s about to hit that shot, every time, is, ‘I’m going to go for it.’ What I really like about his game is his energy, along with his fearlessness, and he plays with a plan.”

In a three-set defeat of a Stevenson High School pair in a semifinal at Deerfield High School last weekend, Vyshyvanyuk cracked an ace on game point in the fourth game of the third set, giving the second-seeded tandem of Vyshyvanyuk-Zordani a 3-1 advantage. In the next game a backhand service return winner by Vyshyvanyuk preceded his forehand winner that split the Patriots at the net for another game clincher.

Match point in the 6-7 (10), 6-1, 6-3 victory featured a wicked topspin backhand by Vyshyvanyuk and a put-away forehand volley by a closing Vyshyvanyuk shortly thereafter.

“I’m looking forward to playing more matches against very good players for the rest of the season,” says Vyshyvanyuk, who, like last season, did not start playing No. 1 doubles matches until late April.

The young man with a plan in prep tennis matches plans to strike winners on tennis courts for Lake Forest College men’s teams from 2020- 2023 while majoring in a field that will lead to medical school.

“People have asked Oleksyi, ‘Why stay around here for college?’ ” Gilbert, the Scouts’ assistant coach, says. “I know one of the reasons: Oleksyi genuinely likes being around his parents [Andy and Natalia]. You have to love that. He’s a great kid, a great student, a responsible guy. He tells you what’s going on in his life. Freshman year he was quiet, very quiet—until you got to know him.

“We joke around a lot now. He’s got a great sense of humor.”

It shows up in tennis circles.

And in a classroom or two, not far from a puzzled teacher on Day One of the school year.