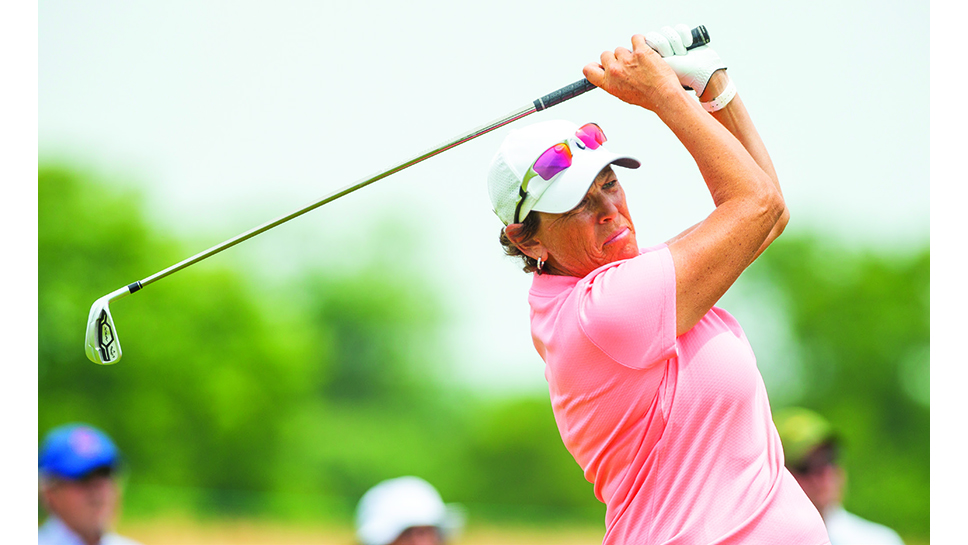 Jamie Fischer hits her tee shot on the seventh hole during the first round of the 2018 U.S. Senior Women’s Open at Chicago Golf Club in Wheaton, Ill. on Thursday, July 12, 2018. (Copyright USGA/John Gress)

A golf ball resting in a favorable position on a golf course is deemed a good lie.

Jamie Fischer could relate to the ball. She sat near driving ranges and picturesque golf courses— for hours on end, on a blanket—as a tot in the 1970s. Fischer’s mother, Andy (short for Andrea), played professional golf full-time for seven years on the Ladies Professional Golf Association (LPGA) Tour and part-time for another seven.

Andy made sure her family and her golf bag accompanied her on trips to tour stops.

“She influenced me hugely,” says Fischer, now 50 years old and about to begin her 12th season as director of instruction at Conway Farms Golf Club in Lake Forest. “That was a pretty big deal, growing up as a daughter of a professional athlete.”

That daughter aced life as a prep athlete at Centerville High School in Dayton, Ohio. Fischer earned at least one varsity letter in five sports. Five. The quintet: golf, tennis, basketball, track and field, and soccer. No other CHS Elk athlete in school history can claim that distinction.

The inaugural Athletic Hall of Fame class at Centerville High School was named in 2004. One of the no-doubt-about-it selectees was Fischer, who earned medalist honors for the first time as an 8-year-old at a six-hole tournament in Ohio.

“I played only one year of varsity golf in high school,” recalls Fischer, whose favorite sports before high school were tennis and soccer. “Girls golf back then wasn’t big, wasn’t played by nearly as many who compete in it today. Both my parents [David and Andy] supported me 100 percent as a girl committed to sports after Title IX had passed. Many people in the 1970s were slow to change their attitudes about female athletes and other issues involved with Title IX; I’m thankful my parents weren’t.”

A young woman for all seasons, Fischer played a sport in the fall, competed in another sport in the winter, and battled in a third in the spring in each of her four years at CHS. These days?

Fischer serves as an instructor at Indian Ridge Country Club in Palm Desert, California, in the winter and spring months and helps youngsters and adults develop their games at Conway Farms in the summers and autumns.

But she’ll take a break from sharing tips and providing encouraging words for her students from May 16-19—dates of the 2nd U.S. Senior Women’s Open, to be held this year at Pine Needles Lodge & Golf Club in Southern Pines, North Carolina. Fischer will tee it up at the LPGA Legends Tour major event because she had qualified to do so automatically after her 12th-place showing at last year’s U.S. Senior Women’s Open at Chicago Golf Club.

“It’s a beautiful course, a terrific one, with rolling terrain,” says Fischer, who, following a highly successful collegiate golf career at the University of Texas while majoring in journalism and speech communication in Austin, played in three U.S. Women’s Opens and four LPGA Championships.

“You get to go in and out of areas with pine trees. Great setting. I played a round at the course last fall.

Her game will never be compared to Laura Davies’ style of play. Few players’ games are. The 55-year-old Davies, a World Golf Hall of Famer born in Coventry, England, is known for her length off the tee.

“I don’t hit the ball super far,” Fischer admits. “I keep it in play. I try for good course manage- ment, good self management.”

Her reputation as a golf instructor has been off-the-charts sterling. Golf Digest named Fischer to its Top 50 Women Teachers list in 2012. So did Golf for Women, another magazine, in 2007. Fischer—an assistant women’s golf coach at Northwestern University from 2005-2007—was among the LPGA’s Top 50 teachers in 2017 and 2018. She also was nominated three times for LPGA Midwest Section Teacher of the Year.

“You have to be able to communicate effectively with a variety of personalities,” Fischer says,referring to what she believes is a must-have trait in her profession. “Knowledge of golf is important, too, as is helping students build on their strengths as a golfer. You never want to wreck what a golfer does well.

“I certainly enjoy helping golfers on their journeys to playing better golf. It’s the best feeling, seeing a golfer improve, even if it’s a 25-handicap player breaking 100 for the first time or a beginner hitting a ball in the air for the first time.”

A resident of Lake Forest for half the year, Fischer has been thrilled for more than a decade to shoot rounds at Conway Farms Golf Club in between her lessons at CFGC, which bills itself as “a superior pure golf experience with the reverence of Scottish tradition since 1991.”

“It’s a fun course to play, and it’s a challenging one,” says Fischer, who has carded one of her career-best 67s at the club’s par-72 track. “Every hole is unique. You have to use every club in the bag. It’s an incredibly special, intimate place, with members who love the game and the traditions of the game. I get to work with a fantastic staff.