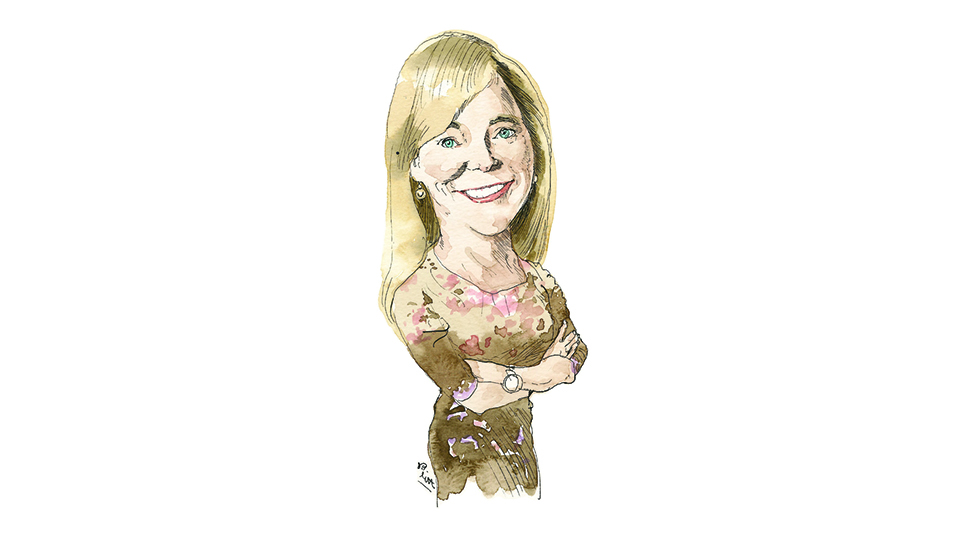 “I have a wonderful story about a dead body in an ice house.”

How’s that for an icebreaker? Elizabeth “Liza” Yntema of Winnetka has several such compelling stories to share, but they are not Gillian Flynn-esque forays into the macabre. They are family anecdotes and meant to illustrate how she, along with her husband, Mark Ferguson, became among the most effective of Chicago area philanthropists. It’s not about how much they have raised and donated, which is considerable, but the ways they have strategically directed that money to affect actual change.

Turns out Yntema comes from a long line of inspirational “kick ass women,” like her “grammy,” who lived to be 104 and at the age of 80, tied herself to the Illinois State House in support of the Equal Rights Amendment. It was these women who inspired her to resolve, upon her 40th birthday, to try one new thing a year that scared her or required a new skill—rowing, tap dancing, or climbing a mountain.

“I don’t learn that fast,” Yntema shares with a laugh, “so now it’s about every two or three years that I try a new adventure. Last year when I turned 60, I walked the Camino de Santiago. If I try really hard, I can rise to slightly above mediocre, but I have a lot of fun. I’m really enthusiastic about a lot of things.”

Paramount among those things is philanthropy, especially in the area of arts, youth services, and promoting gender equality. Yntema and Ferguson have marshalled their efforts on behalf of such institutions as the Hubbard Street Dance Company, the Lyric Opera, and the Chicago Jazz Phil- harmonic, as well as Youth Guidance and the Springboard Foundation, which funds non-profit grassroots organizations that focus primarily on after school and supplemental education programs. In 2013, the couple created a program at Holy Trinity High School to fund college visits for students in need. That program has expanded to a national initiative.

Her latest endeavor is her most ambitious yet, the Dance Data ProjectTM (DDP), which received its nonprofit 501(c)(3) status earlier this year. The DDP addresses long institutionalized leadership gender imbalance in ballet in America and abroad. Yntema, a Boston native, danced between the ages of 3 and 13. An avid ballet-goer, she began to notice that the primarily female audience and supporters of ballet

were not being represented onstage or off. Consider, she says, Chicago theater—which is nationally renowned for the gender and ethnic diversity of the leadership guiding the companies—artisans shaping the productions and playwrights telling a wider range of stories, not to mention the casts bringing those stories to life. This was not the case in the ballet world, Yntema found. “Season after season, production after production, the choreography was being done by mostly white men,” she says. “I would ask about it and the response was that women were not really interested in choreography or that there were no good women choreographers. That didn’t sound right, so I started doing

research at my kitchen table.” Turns out she was onto some- thing. No one, to her knowledge, had done rigorous analysis of the presence or absence of women in artistic leadership. But the disparity was there in plain sight. “I would look around the audience and see it was maybe 75 percent female, and that the company’s funders were primarily women,” she reflects, “but what I saw onstage was not reflecting that. I kept asking questions.”

So now would be a good time to return to that dead body in the ice house as it is another example of determined Yntema women who challenged the status quo. She was an ancestor who in the 19th century enrolled in medical school. It was considered inappropriate then for women to attend gross anatomy classes. With the help of her brother, she procured a corpse on which she could practice by candlelight in an ice house.

“She completed all the class requirements with flying colors,” Yntema reports, and while the school gave her an RN designation, she eventually headed west to practice as a doctor.

“I’m trying to make the art form better,” she says. “A lot of the best work just doesn’t get seen because the big companies in the United States are run by men and they tend to hire other men. There’s got to be a better way. I started visiting dance companies all over the country to listen and learn what are the impediments preventing women from moving forward in leadership. Part of it is institution- al, but part of it is in the cultural DNA. Women are perceived as fungible: do what you’re told, don’t voice an objection; work through the pain; don’t raise your hand. That’s just not true for the men.”

The DDP’s proprietary research is shining a spotlight on the rich underground of extraordinary commissioned work that the public at large at present does not get a chance to see.

When will Yntema consider the Dance Data Project’s work complete? “When I see onstage something that is much more representative of the audience,” she says. “When a lot of the great work that I see being done in smaller cities is brought to bigger stages. My mantra is that as an audience member and as a funder, I have an obligation to say something. We’ll end up with a better product and that will enrich everybody.”

But as with all her philanthropic initiatives, she says she is willing at some point to bring in new people to continue the Dance Data Project’s work and move on to the next thing. In 2016, she met with Holy Trinity leadership and suggested they find a new lead sponsor to take the college visit program to the next step.

“I believe in letting go,” she explains,. “Let someone bring new energy and new ideas. Being generous also involves offering opportunities to the next person, and the new donor family has taken the Holy Trinity program to new and exciting directions.”

To budding philanthropists who like her see a need and an opportunity, she offers this advice: Do your research by going into the communities you want to serve. Don’t think you have the answers just because you have resources. But then think big. Just because it hasn’t been done before, don’t stop.”

For more information on the Dance Data Project, visit dancedataproject.com.