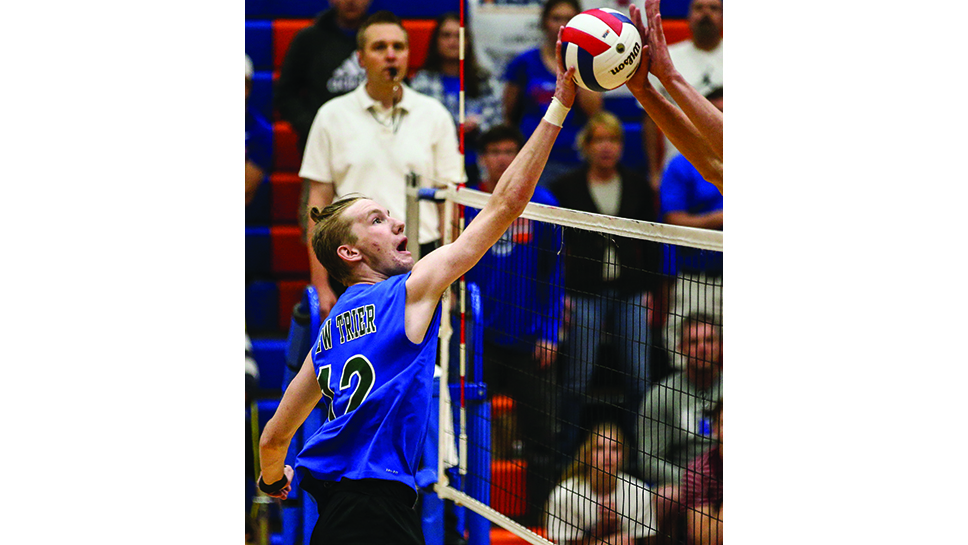 Colin Heath’s holiday gift to his grandmother Mary last winter did not need to be wrapped.

A card from the New Trier High School junior volleyball player did not accompany the gift.

Heath’s present to grandma on Christmas Eve 2018 was simply his presence—minus his man bun hairstyle. A man bun ‘do is a unique look, with hair drawn back into a tight coil at the back or top of the head.

“She had hinted that she didn’t like it,” recalls Heath, who sports a more conventional coif these days. “She thought my plan was to change my hair right after the end of last season. I was staying at her house during the last weekend of our season because my parents were at a wedding out of town. I kept the man bun. Months later, when I showed up at my grandma’s house without the man bun, her jaw dropped. She was happy I got it cut.”

How will Heath ever be able to top that gift this winter?

“Maybe I’ll go bald for her,” he cracks.

Heath’s performances on volleyball courts this spring have been a cut above most other outside hitters. The 6-foot-5, 170-pounder—fourth in kills (145) and second in digs (107) among NTHS Trevians last spring, when the squad (34-8) finished fourth at the state tournament—struck a team- high-tying 14 kills in a three-set defeat of Liber- tyville High School in the season opener last month and pounded 13 more in a victory over Mundelein High School three days later. The Winnetka resident then finished with nine kills, two blocks, and a pair of aces in NT’s triumph over Lake Zurich High School on April 2.

“Colin is a ferocious, lightning-quick volleyball player,” Trevians boys volleyball coach Sue Haak says. “So aggressive, always wants the ball. He’s got power and athleticism, a great shot, and he understands the game well. Colin is a confident gamer.”

One of only two sophomores (right-side hitter Peter Brown was the other) on varsity last year, Heath never wilted when the lights were the brightest. His kill totals in a state quarterfinal, a state semifinal, and the state’s third-place match were

None of their other teammates reached double figures in attacks.

“Crazy,” Heath says of the pressure-packed court tests against Oak Park-River Forest, Lincoln-Way East, and Glenbard West high schools. “I got to experience some big moments—the top moments of our 2018 season on that weekend. I was not as nervous as I thought I would be on the final weekend of the state tournament. I treated each point like it was just another point on our home court.”

In the eighth point in the second set of a victory against visiting Maine South High School on April 10, Heath showed his ability to adjust on the fly near the net. Heath elevated as he prepared for a kill attempt, realized his body wasn’t in the best position to pulverize the ball, and then—in mid-descent—reassessed the situation. Heath “threw” a change-up at the Hawks by delivering a dink, or touch, kill. Later in the straight-set win, Heath, while twisting in mid-flight, caught up to the set and then found an open space in the middle of the court for a clean winner. The Hawks’ front-row defense essentially froze during the sequence because Heath hadn’t telegraphed the attack.

On his conventional attacks, Heath generates most of his power with his whippy right wrist. Heath’s smacks in matches tend to echo longer in gyms than other hitters do.

Heath, a former hockey goaltender, has been a member of the Chicago-based Bounce volleyball club for four years. He and his 17 Red team placed 15th at nationals last summer, a year after he helped another Bounce unit finish 23rd in the country.

“It’s a team sport—that’s what I love most about volleyball,” says Heath, who wants to major in business and play volleyball in college. “I get to play with a great group of guys. At New Trier our energy is our biggest strength. Our defense is also right up there.”

New Trier’s winning percentage of .818 is a rock-solid one. Yet another run to a state quarter- final, at least, seems plausible for the Trevians. The bar Heath and his mates set for 2019 is where it should be: up there.

But it will take more than kills and digs and blocks and sound serving to vault that bar. Some- body has to make sure the team does not press, does not compete with only stern faces.

That somebody is Colin Heath.

“He can be goofy,” Pochetti says.“But that’s good for us. He likes to have a good time when we’re out there. He keeps us loose on the court. Colin,” he adds, “is never uptight.”

The same could be said about Colin’s new hairstyle.