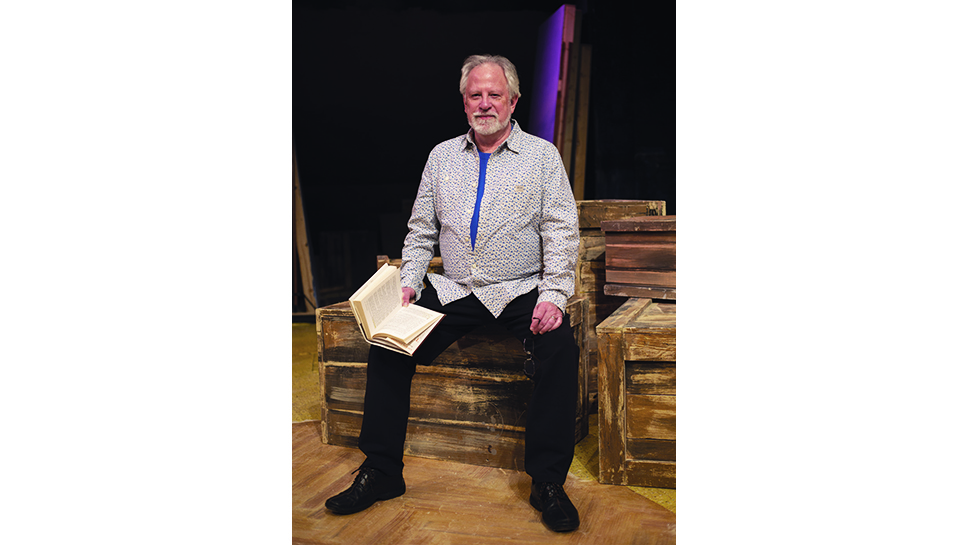 Perched on a metal chair in the middle of a crowded Loyola coffee shop, famed actor and playwright Ross Lehman closes his blue eyes for a second. Not to rest, but to search his vast internal archives for the colorful memories he’s about to share. One after another, they tumble out, each more vivid than the next, all giving context for Sentimental Journey, a one-man show Lehman has just written and is performing at Citadel Theatre in Lake Forest through May.

“My father and his identical twin had a vaudeville act,” Lehman says. “They played the ukulele and teamed up with two sisters who danced while they sang. But the twins only performed because their father—a minister who was notorious for his belief in free love, wanted them to bring in extra money.”

Lehman pauses. “But I’m not sure that will stay in the show,” he says, laughing. “I keep cutting things because there is so much to tell, and I don’t want to give too much away about what is in the show—you’ll have to come see it.”

A musical remembrance of his parent’s courtship, romance throughout World War II, and the family life they led with Ross and his three sisters during postwar 1950s, Sentimental Journey has been just that for Lehman. Years in the making, the play is the tale of two lovers who announced their wedding engagement only to be separated one week later when Lehman’s father shipped off to become an Air Force bombardier in World War II. He went missing in action and was held as a prisoner of war by the Germans while Lehman’s mother, Katey, a sophisticated career woman, waited for his return.

Lehman’s childhood in the home his parents maintained after the war, was dappled with art, music, and song—bright spots that rose above the PTSD that plagued them both.

“My mother was a child prodigy pianist, and a writer. My father had that vaudeville background and was also a writer. There was always a typewriter clacking in the background,” says Lehman.

“Both of them would just come to life when hearing old songs.”

Lehman’s piece intersperses many of his parent’s favorite songs—soldier’s ditties, pop stan- dards, and hymns—with his remembrances of the stories they told. The decision to create a one-man show from the material seemed natural.

“My parent’s meeting, engagement, separation, and reunion were so dramatic,” says Lehman. “They started telling us those stories when we were very young. I love storytelling, so I carried that forward. Whenever I would tell my parents’ tales, people would always say, ‘You gotta make that into a play or a screenplay’.”

Lehman, who was very shy as a child, didn’t begin acting until the early ’70s in New York,“which was a very difficult place to launch an acting career at that time,” he says.

Word that Chicago had more opportunity drew Lehman to our area shortly after. He got his first acting job within weeks, and never stopped.

“I had my Equity card within months and never looked back,” he says.

Roles in musicals and comedies were quickly followed by dramatic roles, classical theater, and playwriting.

“I’d perform in one genre and then after a while, that genre might go through a lull so I would just take a job doing the next one,” he says. “I always wrote as a kid. And when I first came to Chicago, I wrote a play about two teenage boys with active imaginations who created a reality completely around the fictional worlds of William Faulkner.”

Never having written a play before, Lehman didn’t know what to do to shop it around, “So I just sent it to the Goodman. They said they wanted to workshop it,” Lehman laughs. And so, Sons of Coral Gap went to the Goodman.

Now, more than three decades later, Lehman’s career has included Broadway shows such as A Funny Thing Happened on the Way to the Forum, The Tempest, and One Flew Over the Cuckoo’s Nest; the Jeff Award-winning plays Where’s Charley and A Man of No Importance at Apple Tree Theater in Highland Park where he has performed for more than 35 years—plus many credits on Chicago professional stages including Chicago Shakespeare Theater where he was seen most recently as the Fool in King Lear, and, at Writers Theatre in Glencoe where he was in As You Like it and Bach at Leipzig.

Currently Lehman splits his time between acting, and teaching theater at Loyola, DePaul, and Northwestern. Creating Sentimental Journey has brought him full circle to delve more deeply into the origins of what made him what he is today.

“Years ago, I tried to create a cabaret act with some of my parents’ story,” he says, “but it just didn’t feel right. I think I was afraid to go more deeply into the material I needed to look at to do this right.”

Doing so now, Lehman read through dozens of letters, journals, and columns his parents wrote about their past—an emotional process for Lehman. “The letters were very lively, thoughtful, reflective, sometimes very sad, and sometimes raw. I realized doing all of this research that these were people I really didn’t know,” he says. “Getting to know them through this process has been a huge gift. The overwhelming feeling I’ve had from doing this has been gratitude. My parents gave me so much without me realizing it. Art, music, song, and the freedom to be sentimental without judging myself for being so.”

For tickets and other information, visit citadeltheatre.org or call 847-735-8554.