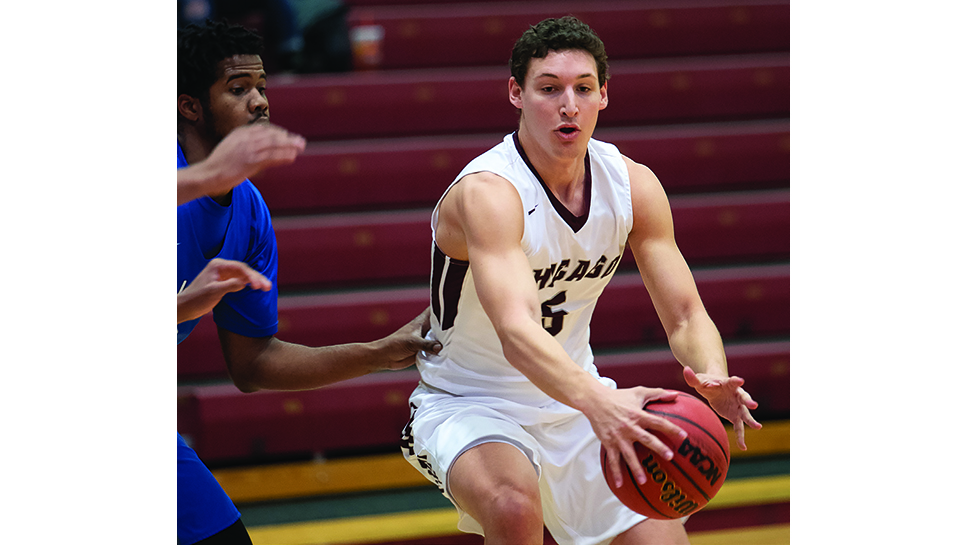 CAN-DO KARRAS: Noah Karras, seen here in action during his senior season at the University of Chicago, canned a program-record 11 three-pointers in a game in his sophomore season. The 2015 Lake Forest High School graduate helped his high school team win a program-best 28 games and reach a Class 4A sectional final in his senior season. PHOTOGRAPHY BY UNIVERSITY OF CHICAGO ATHLETICS

One of the sharpest shooters in men’s basketball history at the University of Chicago helped an organization deter a different kind of shooter two summers ago.

Noah Karras—a University of Chicago senior sociology major and a former standout hoopster at Lake Forest High School—spent most of his summer in 2017 as a valuable team member of Chicago CRED (Creating Real Economic Destiny). Its mission is to achieve a transformative reduction in Chicago gun violence. It believes the best solution for ending gun violence is recruiting city men most likely to be perpetrators or victims of shootings and transition them to jobs in the legal economy.

“I’ve heard Arne Duncan speak before an audience,” says Karras, who, during that summer, spoke of leadership and other relevant topics with young men from the city’s South and West sides. “He’s such a strong influence. He’s great with young people, knows what their standards should be. I admire his overall positivity and how hard he works to combat gun violence.

“Arne,” he adds, “is a very good basketball player. He’s a lefty—a crafty lefty—on the court.”

The 6-foot-4, 190-pound Karras (LFHS, ’15) emerged as a major backcourt weapon for the Maroons in a Division III collegiate career that tipped off rather quietly. He played in only eight games as a freshman in the 2015-16 season, aver- aging 2.1 points and 0.6 rebounds per game. Karras had averaged 12 points per game and earned Il- linois Basketball Coaches Association all-state (honorable mention) honors and all-North Sub- urban Conference recognition as a senior point guard at LFHS.

His sophomore season at the University of Chicago?

Karras started 13 of 24 games, struck for 13.1 points and grabbed 2.4 rebounds per game, and had one of the most memorable games in program history in a home victory against Case Western Reserve University. Karras netted 39 points versus CWRU,with 33 of them coming from three-point territory.

His 11 treys, in 14 attempts, set a Maroons record on that day. For the season he shot 44.6 percent from beyond the arc, a top-10 statistic among Division III players in the country.

“It’s pure,” classmate and teammate Ryan Jacobsen, of Saint Paul, Minnesota, says of Karrasshooting form. “There’s nothing herky-jerky about it. Quick release, smooth. I was a firm believer, in our games at the end of his career, that he was the most skilled basketball player on the court.”

“Noah’s shooting ability was special when we recruited him,” Maroons men’s basketball coach Mike McGrath recalls. “It got us excited. His release point changes, but his mechanics up to the release are perfect. But what thrilled us more than his shooting was what basketball meant to Noah; basketball was important to him in high school. We saw that. That’s important to us.”

In between his junior and senior seasons at U of C, Karras felt ready to expand his role as a teammate. This had nothing to do with fraying nets or dishing passes or coming down with rebounds.

This had everything to do with his voice—on and off the court.

“I went up to Coach McGrath and said to him, ‘Listen, I see myself as a leader, and I want to utilize the leadership qualities I know I have in my last basketball season.’ Basketball had helped me mature. It was time for me to show maturity as a leader in games, in practices, in huddles. After I told him, he stood there, with his arms crossed and a matter-of-fact look.

“The look, to me, said, ‘Prove that you’re capable of taking on that role.’ ”

Karras did just that for a squad that won 15 of 25 games in 2018-19, and the added responsibilities failed to lighten the numbers (9.4 points and 2.2 rebounds per game) he produced as a junior. A starter in every game in his senior year, Karras averaged 11.7 points and three boards per game and tied for the team lead in three-pointers made (60). He tallied 23 or more points three times and was named to the all-University Athletic Association team (honorable mention) after making the Don Lane Classic all-tournament team.

“Noah, in his junior season, struggled a bit with self-confidence, so I wasn’t sure he’d be an effective leader when he informed me how much he wanted to lead us,” McGrath says. “I knew his heart was in the right place. He certainly developed as a leader over time, and as a player he became one of our best defenders in his last season. As a leader he was that guy who, when a teammate heard something that he didn’t want to hear but needed to hear, would bring that teammate back into the fold. You need a guy like that on a team.”

Karras had entered high school as a shooting guard but ended it as a point guard. Karras was on board with the Scouts coaches’ plan to have him develop ball-handling skills while playing for the sophomore team in the 2012-13 season.

“That was new for me, being a floor general, and I’m glad I learned how to be one at the sophomore level,” says Karras, who competed as a shooting guard in each of his collegiate seasons.

He’s also grateful for how well LFHS prepared him for life in the classroom at the University of Chicago.

“Lake Forest High School does such a great job making sure its students are ready for college academics,” he says. “I was really fortunate.”

So were the students with whom Karras interacted at Beacon Place, a community center in southeast Waukegan with programs for kids and adults that build life skills for brighter tomorrows. Karras served as a volunteer at the center and was named Rotary Club of Lake Forest 2015 Youth Volunteer of the Year.

He has already interviewed for wealth management jobs at banks.

“Noah will be a reliable employee,” says Jacobsen, a 6-5 forward for the Maroons in 2018-19. “There’s no doubt. People will trust him at work. No issues with Noah, one of the best dudes, very nice, very humble. Very determined and team-oriented, too. He stepped up for us, responsibility-wise, this past season. He came to play every day.”