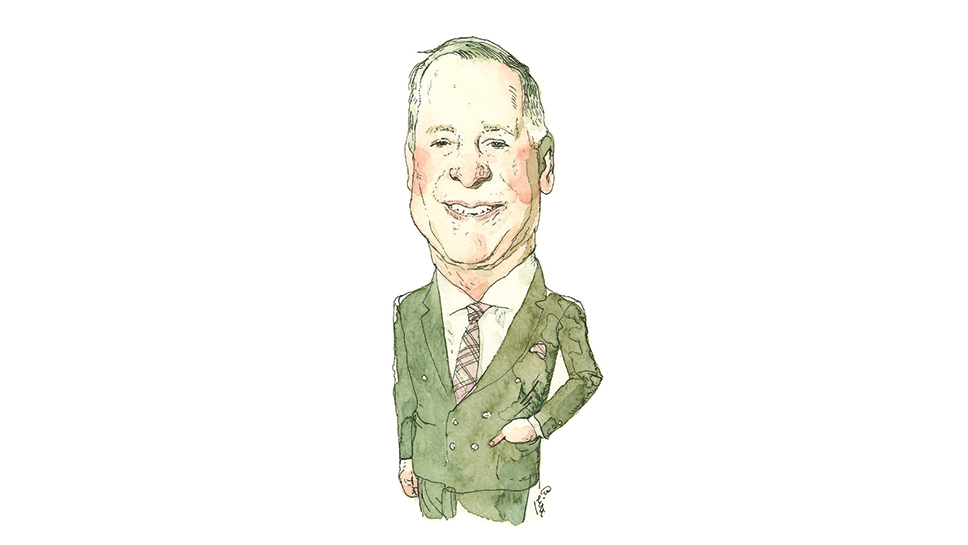 At eight o’clock on a sunny spring morning, Highland Park’s Country Kitchen café is a busy place. In the time that it takes Steven Elrod to walk the 15 or so feet from the door to our booth, three of four tables of breakfasters have stopped him to say “hello.”

“Ha!” Elrod laughs, “Well, people know me for a couple of different reasons.”

As we talk, the understatement in that statement becomes clear. Elrod is a man who wears a lot of hats.

In addition to the intense work he does as one of the foremost land use attorneys in the Chicago area (he’s a partner at the Chicago office Holland & Knight), Elrod serves as President of the Chicago Bar Association; is the Village Attorney for Northbrook, Deerfield, Highland Park, Lin- colnwood, and Glencoe; and is on the Board of Directors for several agencies—the North Suburban Legal Aid Clinic, and the Harold E. Eisen- berg Foundation among them. He’s also a professor at Northwestern University Law School, partly owns and is on the board for popular Eagle River boys sports camp, Camp Ojibwa. Oh, and he’s raised two children with his wife Donna in the same Highland Park house for the last 35 years.

But more than that, Steven Elrod is an “in-person” person, which explains the warmth of all those breakfast hellos. In this age of internet everything, where electronic conversations have replaced so much human interaction, Elrod is a stalwart believer in the power of the real thing.

“It’s true,” he says, “In all of the groups I am a part of, I’m the one saying “Lets have more in-person meetings. People may groan, but honestly I am a big believer in bringing people together to talk face to face. Technology and social media are creating barriers to collegiality.”

Elrod’s in-person approach to most everything he does means very long days, but it has a lot of up sides, too. It gives greater context to his success as a natural dealmaker in law cases and land use matters. And it thoroughly informs the theme for his leadership this year as Chicago Bar Association president.

“I’ve focused on three “C’s during my term of office,” says Elrod. “Civility, Collegiality, and Civic Education. In this day and age, I believe all three are seriously at risk.”

These concepts that Elrod finds so vital are ancestrally rooted. Steven’s grandfather Artie was a larger than life political figure in Chicago, one of the most “people-oriented people in the city,” he explains.

Arthur (“Artie”) Elrod emigrated to Chicago from Russia as a 10-year old, whimsically changing the family name from Exelrod to Arthur X. Elrod. As a Cook County Commissioner and Ward Committeeman in the 24th ward, Artie worked closely with Jake Arvey, and was responsible for the development of the Cook County Hospital system.

Likewise, Steven’s father, Richard, gravitated to city government taking a job in the Chicago Corporation Counsel’s office directly out of law school. In the streets monitoring the crowds during the 1969 “Days of Rage” riots, efforts to still the actions of a violent protestor who was injuring a policeman, caused Richard to fall and break his neck, leaving him a quadriplegic.

“I was 12 and my father was 35,” Steven recalls. “Doctors didn’t expect my father to live, but within nine months of the accident, he ran for Cook County Sheriff, and went on to serve in that capacity for four terms. Nothing influenced me more than being raised by this man who never let hardship stop him.”

Rather than go into politics like his paternal predecessors, Elrod chose to practice law.

“I’m not a public servant in the sense that my father and grandfather were,” he says, “but I have found a way to serve the public both through the legal work I do representing municipalities, and through the boards and organizations on which I serve.”

Among these, Elrod is especially enamored of the Harold E. Eisenberg Foundation, which he praises for “brilliantly and successfully combining cancer research with real estate education, sub- stantial advancing both causes.”

He also has a special place in his heart for the North Suburban Legal Aid Clinic which he helped create with Highland Park Mayor Nancy Rotering.

“We opened the doors of the clinic three years ago with just one or two cases, and have since expanded to dockets of hundreds of cases. It is incredibly gratifying,” says Elrod.

“There was definitely a spark that ignited in that chemistry class,” says Elrod. “Donna and I didn’t date in high school, but she came to Tulane University, where I was going to college, and that’s where our beautiful story continued.”

Looking for the right home to raise their family, the two found their way to Highland Park. “It felt so remote and beautiful, it reminded me of the North Woods of Wisconsin,” says Elrod, whose associations with that idyllic place go back to infancy. “We love Highland Park,” says Elrod, “The community, the people … it’s our home. And we also love Eagle River where we have a second home on the same lake I spent my childhood summers at Camp Ojibwa.”

Richard Elrod—a gifted athlete who played football at Northwestern University—had attended the sports camp as a child. Those happy memories led him to bring his family there for post camp. When Steven was 10, he begged to go to the boys’ sports camp, too.

“I’m not athletic, but I am competitive and loved sports, so my parents said yes. I dropped lots of balls, struck out, and missed all the easy shots. But I tried. And I cared. And the other boys saw that. So when I finally hit that home run, or made that lay-up, they would cheer,” he smiles, remembering. “Now, when I talk to worried parents who are thinking about camp for their boys who love sports, but aren’t athletic, I tell my story. They send those boys to Ojibwa and they have a positive experience too.”

In parting, Elrod chooses the same phrase he uses to close each of his law classes at Northwestern at the end of the semester,passed on to him from his famed predecessor in the class, Dawn Clark Netsch:

“Now go out there in the real world. But don’t just think about doing something: Do it. No matter how you get involved, get involved. Be on a school board or city council. Be a community organizer. And don’t let any barrier stand in the way.”