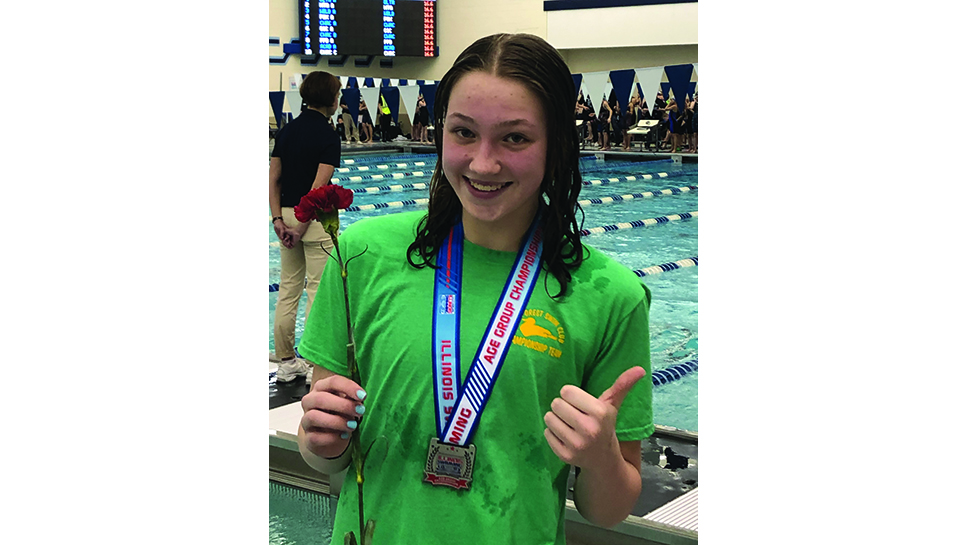 Only 28 girls received invitations to train at USA Swimming’s Central Zone Select Camp in Cincinnati next month. School of St. Mary eighth-grader MaryGrace King was one of them. Photography by Lake Forest Swim Club

MaryGrace King had just won a 25-yard back- stroke race when she started to sprint toward her orange beach towel. Mom Sandi was holding it for her six-year-old daughter.

Mom used the towel to catch and wrap the gifted swimmer.

Back then, some eight years ago, an image of the sun and the words BANNER DAY CAMP adorned the towel.

“I still have that towel. I still use it at meets,” says King, now 14 years old and an eighth-grader at School of St. Mary in Lake Forest. “But the sun and the words on it, they’re all faded, pretty much gone.”

Unlike King’s decorated swimming career, which continues to show no signs of disappearing. The 5-foot-8 King, a Lake Forest Swim Club (LFSC) member for more than half her life, was one of 28 girls chosen to attend USA Swimming’s Central Zone Select Camp May 23-26 at the University of Cincinnati.

King—with a USA Swimming national IM Xtreme (IMX) ranking of 34 in her age group (13-14), as well as IMX zone and state rankings of No. 4 and No. 1, respectively—and her Team USA teammates will participate in five training sessions in the four days at the camp for emerging swimmers from the Midwest. The athletes will learn more about post-race recovery, nutrition, race strategies, and sport psychology skills from professional support staff in the “Buckeye State.”

“MaryGrace listens well and certainly has the work ethic of a swimmer who always wants to get better,” says Michael Lawrence, a Lake Forest Swim Club coach since 1985. “As a swimmer she’s like an eager puppy on a leash, constantly determined to pull away. She’s almost always upbeat and optimistic. Sometimes she’s disappointed after a race or after a meet, but that’s because of her competitiveness. She bounces back well, shows resilience.

“You’ll never see MaryGrace,” he adds, “wallow in disappointment.”
King excels in distance events, the 400-yard IM in particular. In February she clocked a first-place time of 4:28.57 in the grueling test at a prestigious meet in Brown Deer, Wisconsin. The result bet- tered a USA Swimming Futures Championship cut. Her personal-best time in the 500 freestyle is 5:02.03.

“It’s the best feeling, swimming faster after thinking, ‘OK I can do this,’ right before the start of a race,” says King, a straight-A student who is already looking forward to diving in as a Latin Club member at Lake Forest High School this fall. “For me it’s harder be on a [start] block at a meet, waiting, than it is to race.”

Lawrence says King is easy to coach. So does AJ Block, King’s summer club coach and Vernon Hills High School’s first-year varsity girls swimming coach in 2018. King was seven years old when she had her first lesson with Block in Lincolnshire.

“MaryGrace is a big deal, very special,” Block, a former varsity girls swimming coach at Highland Park High School, says. “Real smart, real dedicated. I remember when she was little and I told her in the water, ‘Copy me.’ She had fun, and she worked hard. Now she’s tall, strong, really com- petitive, motivated. In the last year or so, she has said to me, regarding a stroke, ‘I want to tweak this or I want to tweak that.’ That’s amazing to me. How many swimmers, who are only 13 or 14 years old, express something like that to an instructor? Amazing.”

King doesn’t just hit the water and the books. She sang in her school’s production of Godspell in between big swim meets in Indiana and Minnesota. She is an altar server and a choir member and a Sol youth group member at church. She is the Student Council secretary at her school. In her free time she writes poetry and reads books. Ask her anything about any chapter in the first five books in the Throne of Glass series by young adult epic fantasy author Sarah J. Maas.

“MaryGrace is super independent,” says her mother, a former gymnast whose late grandmother, Ruth Spyrison, taught swimming lessons at Leaning Tower YMCA in Niles. “She has a lot on her plate, but she gets it done, all of it. I help her where I can, help her maintain balance in her life. If she gets invited to a friend’s birthday party, I’m quick to tell her, ‘Go to the party and have fun.’

MaryGrace King has leadership qualities. If she sees anyone get mistreated, she never hesitates to intervene.

“She speaks up for others and protects others,” Sandi King says. “My daughter is also good at being a peacemaker. I’m proud of her dedication, but more than that, I feel blessed to be her mother.”

One of her daughter’s dreams is to qualify for the Olympic Trials in 2020. Maybe MaryGrace’s faded, frayed orange towel will get a break at the big meet. Maybe, just maybe, she’ll get to wrap herself into something red, white, and blue instead.