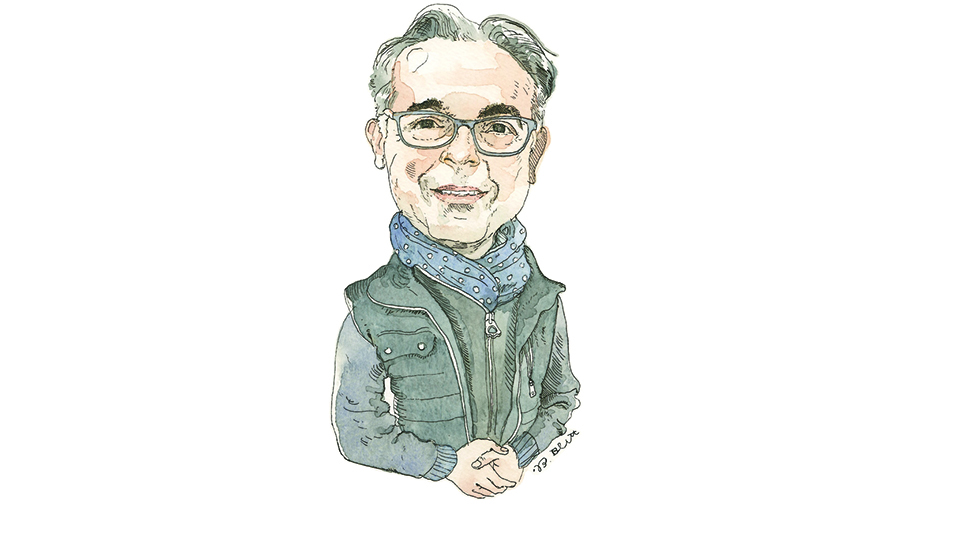 “She really taught me everything I know about cooking,” he says. “To do things by taste, feel, and repetition until you know a recipe not from the printed page, but from doing it. But more than that, she showed me that cooking is love.”

In a career as a news anchor and reporter that took him all over the map before landing him for the long term with his family in Evanston, Gerasole has interviewed innumerable greats. He chatted one-on-one with Hillary Clinton. He got Sting to sing, “Happy Birthday,” to his sister. And when meeting with Robert DeNiro about the star’s new West Loop hotel Nobu, the two chatted in Italian. But ask Gerasole who and what he’s enjoyed reporting about most, and he’ll tell you stories of food and food people.

“Rosalie Musiala—now that was a wonderful story of just how much a mother is willing to do for her child!” says Gerasole, grinning as he places a dollop of his wife Heidi’s Hawaiian passion-fruit curd on top of the toast.

As Gerasole tells it, Rosalie Musiala, the principal at Evanston’s Pope John the XXIII (where his daughters Isabella and Olivia went to grade school) grew up in Sicily to a hardworking family with little money. Rosalie’s mother Grazia scrimped and saved to buy Rosalie the red rubber ball she wanted more than anything. When an envious neighbor child stole the ball, Grazia confronted the child’s mother, to no avail. Years went by in the Musiala household, full of family traditions and simple good food—including cookie making, which always featured one, big, pasta pot to mix the dough and to store the sweets.

“So,”says Gerasole,“at the end of a long, full life, Grazia lay on her deathbed and insisted that she needed to confess a sin—a secret she’d kept all her life. As family stood by wondering what on earth it could be, out came the truth: “That woman who wouldn’t return my daughters ball?” said the dying matron. “Well, when she wasn’t looking, I stole her pasta pot!””

Gerasole laughs and shakes his head. “The things we do for love!”

In fact, food-love stories are a Gerasole family staple, circling back to his childhood in Pittsburgh, where Grandma Romanelli was notorious for the food she made and gifted to others. “There are so many examples!” says Gerasole. “The enormous lasagnas she made and had me heft to the doctor’s office every time she had an appointment. The traditional hand-made pizzas she brought to school on my birthday instead of cake. And when I was little, my grandfather worked next door to my elementary school. So, every day, she’d make us both lunch—steak and peppers, lasagna, meatballs. The staff at my school were so tantalized by the aromas, eventually, she was making them lunches, too!”

This spirit of generosity trickled down. During Vince’s years as a Political Science and Italian major at Northwestern University, it prompted him to cook the home-made pasta, meatball, and spicy sauce suppers he served once a month to everyone living in Willard Residential Hall. It flavored his courtship with Heidi Umbhau, the Hawaiian-born newswoman he met, married and co-anchored with for years both in Nevada and Hawaii. It made it only natural that the couples’ daughters took their neighbor Gaylon Emerzian’s idea fora kids cooking show and ran with it. Called “Spatulatta,” the show won a James Beard Award for Best Webcast in 2007, leading to the Spatulatta cookbook the girls wrote for Scholastic, dozens of appearances on national television, and advertising partnerships.

Likewise, true-foodie affection made Gerasole’s years doing his “Table for Two” culinary reporting segment for CBS 2, a labor of love, earning him three James Beard Award nominations. And he’s still at it, telling specialty enterprise stories and sometimes food and restaurant profiles, as a reporter with CBS 2’s Morning Insiders, a team dedicated to in-depth reportage.

“We’ve explored everything from the high costs of opening up a restaurant in Chicago, to the olive oil shortage in Italy and its implications here in the U.S.,” says Gerasole who has been with CBS for 18 years.

In his spare time, Gerasole loves to visit Italy where he taught school for a season, and worked as a radio disc jockey. On recent journeys there he taped short documentaries to be featured at special dinners at his extended-family’s restaurant, Girasole in Pittsburgh. (Yes, spelled with an “i”–Vince’s family name, he explains, has been misspelled since an immigration officer took the name down wrong.)

Gerasole’s fluency in Italian has come to good use in Chicago where he’s translated for visiting chefs including such heavy hitters as Massimo Bottura and Franco Pepe—considered the world’s finest pizza maker.

“I learned a lot from him,” says Gerasole. “Which I brought home to my own kitchen.”

But next week, instead of pizza, you will find Gerasole making his grandmother’s Easter bread.

“When I was small, I was a chubby little guy,” he says. “They used to call me Roly Poly Gerasole—no kidding!” he laughs. “But my grandmother never restricted me from eating anything she made. Except once. One Easter, baking this bread, she finished a loaf, and pulled it from the oven to cool. I stood there and ate the whole thing as the next loaf baked. When she pulled the second loaf from the oven and I ate that one too, she turned to me and said, “You gotta stop! I gotta give-a these away!” It was the only time she told me not to eat.”

To ensure there is enough bread this Easter, Gerasole expects to bake at least three loaves.