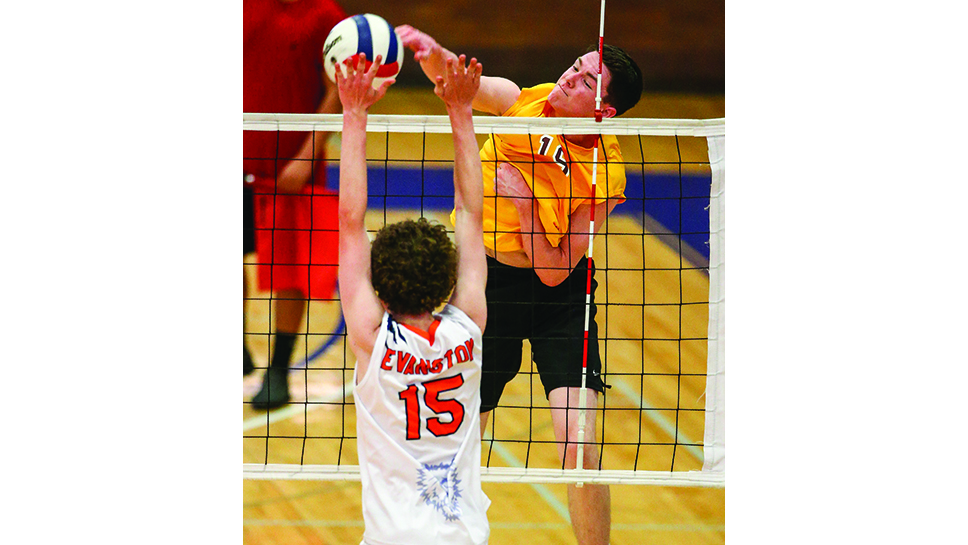 Could you blame Jack Howard’s club volleyball teammates for their disruptive behavior in a theater during a musical last fall?

The Vernon Hills-based Adversity Adidas 18 spikers had clustered themselves in a corner of the theater at Regina Dominican High School in Wilmette. Howard, a 6-foot-5, 180-pound outside hitter who also plays volleyball for Loyola Academy, was Prince Topher in Cinderella, the lone male in the cast, the primary reason his teammates had cancelled all other plans—had there been other plans to cancel on that November evening.

“They had never heard me sing,” Howard, a Northbrook resident, recalls.

They went nuts when Howard sang on stage for the first time in the production. The teammate who amassed impressive kill totals in volleyball matches was killing it—killing it—as a performer. Howard’s boys cheered and whooped it up loudly, startling other audience members, plus a cast member or two, and unintentionally breaching who knows how many theater protocols.

“They almost got kicked out, and they were sitting in the back, way in the back,” a smiling Howard adds. “It was cool, having them there and hearing their support.”

Howard’s final act (at the prep level) on the stages with a net in the middle of them continues to earn rave reviews. A senior and a varsity netter since the first match of his freshman season at Loyola Academy, Howard was named Most Valuable Player at the Vernon Hills/Barrington Invitational last month after averaging nearly 11 kills per match and pounding 13 in LA’s 18-25, 25-16, 25-16 defeat of Glenbard East for the championship.

Clemons and senior middle Gavin Elliott). “He sees the court and the blockers well and finds the open spots, most of the time hitting with a ton of power. He’s super competitive.

That limb and his three others outnumbered the number of boys in his class at St. Norbert Catholic School in Northbrook. His class of 12 consisted of only three males.That meant he’d have to compete with and against older boys in his middle- school seasons. One older boy back then was future Loyola Academy middle Nick Howard, Jack’s brother and a 2018 Loyola Academy graduate.

“I was always the little guy on those volleyball teams,” says the teen with the frame of a lean forward in basketball.

For the first half of his junior season, he was the injured starter on the bench. On the first day of tryouts last spring, Howard popped to block a kill attempt by Clemons. Howard, on his return to earth, landed on one of Clemons’ feet, suffering a severely sprained right ankle. Howard still ended up with 165 kills and all-Chicago Catholic League honors (for a second time) for a 27-win club that won a seventh regional title in 10 years.

Howard and Clemons, also of Northbrook, were Chicago Bounce club volleyball teammates for four years. Their first day on the court, together? It was a Bounce tryout day.

“We were going at each other with our serves, trying to ace each other,” says the 6-1 Clemons, who plays considerably bigger than his height in the front row.

Ebeling notes Howard continues to work hard on his serve-receive, a habit he hasn’t been able to kick since Day One as a Rambler. An opponent serving anywhere near Howard in 2019 would receive a scowl from his coach.

“That’s a testament to the progress Jack has made in that aspect of his game,” says Ebeling, whose boys of spring (the season and the verb) finished a strong fifth at last weekend’s 24-team Tiger Classic at Wheaton Warrenville South, losing only to eventual champion Minooka High School in a Gold Bracket quarterfinal on March 30.

“Work hard as an individual, play as a team,” Howard says of the keys to the sport he loves, a sport he intends to play as a walk-on at Penn State University. “It’s such a team sport, volleyball. You have to have all six players playing hard, playing together, and I’m grateful we have that going for us at Loyola.”

Late in the first set of a snappy 25-14, 25-10 defeat of St. Ignatius College Prep in a CCL match at Loyola Academy March 27, Howard struck an ace, extending LA’s lead to 19-10. Shortly thereafter Loyola Academy senior Annie Magner, a defensive specialist on the Ramblers’ girls volleyball team, shouted “I know him!” from her seat in the bleachers.

Later in the match, following a timeout, Howard shimmied briefly to the music blaring in the gym as he returned to the court and prepared to deliver another serve. The moves delighted Magner and her friends sitting next to her. It was a fun sight.

And a bit unusual.

“I’m usually super serious on a volleyball court,” the future pre-med student said afterward. “Off the court I’m all smiles.”

Kindergartners and first-graders know all about off-the-court Jack Howard. He’s their English and math volunteer tutor at Madonna Mission in Chicago. Every Wednesday, during LA’s third quarter, for one-on-one sessions since his sopho- more year.