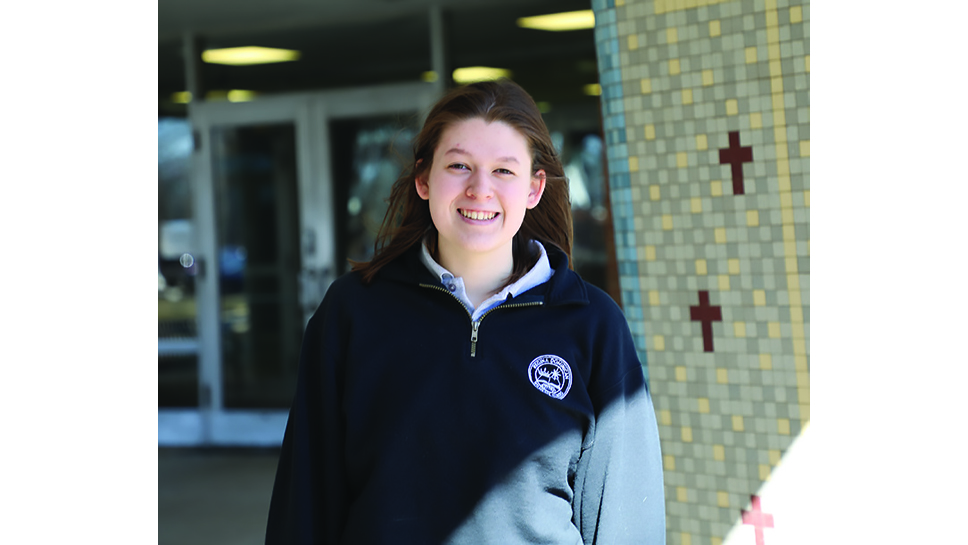 Leia Spaniak’s first experience on a horse did not end well.

She was four years old, on her aunt’s farm in Wisconsin. Little Leia fell off the animal. No serious injury to report, thankfully.

Her journey to the ground could be measured in feet and inches. Some 12 years later, Spaniak, now a sophomore at Regina Dominican High School in Wilmette, has an entirely different kind of trip on her mind.

It’ll cover 220 miles—above the Earth. Spaniak won’t travel to the International Space Station (ISS) this summer, but her experiment’s contents will. Spaniak, of Northbrook, had spearheaded a teamof five students in a competition (Go For Launch!) staged by Higher Orbits, a Leesburg, Virginia-based non- profit that promotes Science,Technology,Engineering, Arts, and Math (STEAM) by bringing young people together with astronauts and industry professionals to explore the exciting possibilities offered by space and space exploration.

“I love learning,” says the down-to-earth Spaniak, whose current course load includes a pair of AP classes and a pair of Honors classes. “Always have. And I enjoy watching science TV shows, space TV shows.”

Her favorite TV show?
Discovery Channel’s MythBusters.
The name of her team in the Higher Orbits contest was Reginae Reginarum. The contingent’s winning experiment focuses on determining if microgravity affects production of the antioxidant astaxanthin in H. Pluvialis, a freshwater species. Astaxanthin is a carotenoid pigment that occurs in trout, microalgae, yeast, and shrimp, among other sea creatures.

The experiment is scheduled to launch from Kennedy Space Center in Florida.

“Our team gathered in a room and developed the experiment,”Spaniak, 16, says.“It took us four hours.” She plans to spend a part of her summertime at another ISS, this one located on Planet Earth. Spaniak was one of only five students in the country—and the only one from Illinois—chosen to attend lectures and participate in team-building activities July 2-27 at the International Science School (ISS) in Sydney, Australia. The other hemisphere of her resourceful brain had to be exercised for the application process.

“I wrote essays,” she says. “A lot of essays.” Ideally the date of the SpaceX-18 launch (still up Leia Spaniak in the air, as of late March) in Florida won’t conflict with her commitment to studying Down Under.

Closer to home Spaniak became a historian recently when she completed a project for the Chicago Metro History Fair. She examined the eradication of racially restrictive covenants and housing discrimination. She interviewed a couple of well-informed sources, including a law professor.

The other was the Rev. Jesse Jackson.

The arts?
Spaniak embraces those, too. Last fall she worked behind the scenes (set, sound) for the school’s production of the musical Cinderella. Her older sister, senior Lisa Spaniak, played the lead role in the November shows. Leia Spaniak, who takes a class at Glenview School of Arts once a week, used colored pencils, green hues mostly, to draw the Monsters, Inc. movie character Michael “Mike” Wazowski. It took her three days to create it. She gave her vivid artwork of the one-eyed deuteragonist to her father, George, as a gift, her depiction of Wazowski spot-on, movie-poster worthy.

It’s early, yes, but Miss Spaniak can see herself vying for a job someday as an imagineer at Disney World in Orlando, Florida. Among an imagineer’s duties is designing amusement park rides. She ranks Disney’s Splash Mountain No. 1 on her list of “Must Experience” rides.

Just as exhilarating for Spaniak is transport via hooves. She survived the fall off that horse all those years ago and overcame whatever fear she had experienced before attempting mount No. 2.

Need evidence? Stop by Glen Grove Equestrian Center in Morton Grove, look around, and don’t be surprised if you see a certain teen, secure and confident, riding atop a trotting, head-bobbing horse.

And don’t forget to wave to Leia Spaniak.

Do you know a student doing outstanding work in the field of charity, science, arts, business or education? Please call 847-926-0911 to nominate a Standout Student.