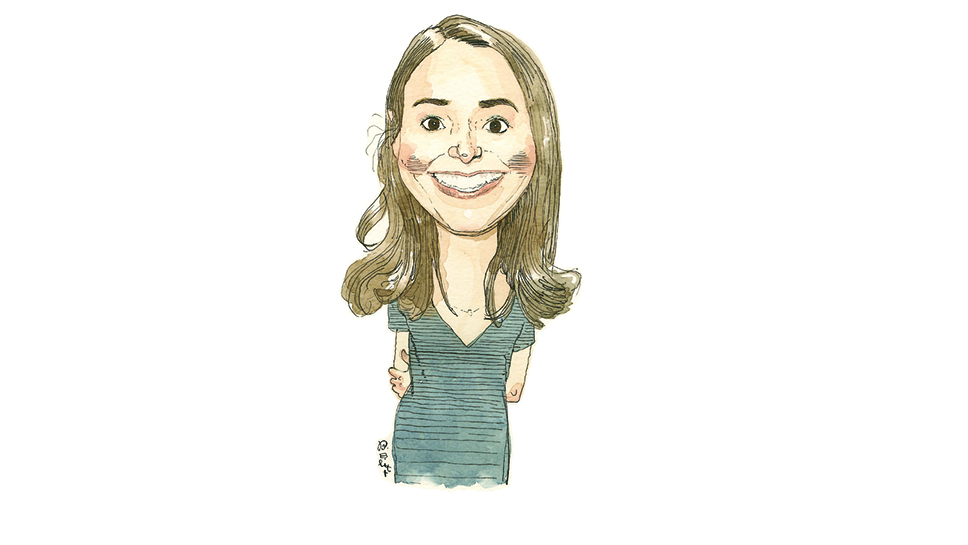 The condition of the three tennis courts dismayed Ali Barnett. She drove past them in New York, some 10 years ago. She was a sophomore in high school and already a veteran varsity tennis player. Each empty court at the public facility lacked a net.

Barnett, who grew up on Long Island and volunteered at two U.S. Open Tennis Championships in New York City, wanted to do something, anything, to restore the courts, to see young tennis players on the three courts running and hitting winners and smiling.

“I started a summer tennis program for underserved kids,” Barnett, sitting in a booth at Country Kitchen in Highland Park, says. “It was sad to me, noticing unused courts. I went to local tennis shops and asked for donations. They donated tennis rackets and tennis balls.”

Nets and netters reappeared on the courts. Skateboarders had to find another place to roll.

Barnett ran the program for two summers. “Your best shot in tennis?” I ask.
“My forehand,” the humble 27-year-old replies

somewhat hesitantly, fearing the answer would make her sound boastful.

“Some topspin,” she says, a slight smile forming above her order of scrambled eggs, a cup of mixed fruit and a glass of orange juice.

Ali Barnett, a Highland Park resident, also serves quite well—off the court. For more than two years, she has been the director of development at Zacharias Sexual Abuse Center (ZCenter), the lone rape crisis center in Lake County. In fiscal year 2018 it was a haven for 232 survivors who were served in emergency rooms. A total of 1,030 clients underwent counseling in the same 12 months. One welcoming ZCenter building is located in Gurnee, the other in Skokie. From July 1, 2017 to June 30, 2018, more than 13,000 students in Lake County schools received prevention education from ZCenter personnel.

Founded in 1983, the nonprofit’s mission is to provide a place where survivors of sexual assault and abuse can heal, and to mobilize the community toward action to end sexual violence.

“I don’t consider what I do a job,” Barnett says. “I’m helping—all of us at ZCenter are helping— those who don’t have a voice, those who need to be believed and validated and empowered. It’s heartbreaking, every single case. I’ve heard some people say the topic of sexual abuse is depressing, numbing. I don’t look at it that way.

“It’s not depressing,” she adds, “when it’s ad- dressed and each victim uses our center as a bridge to healing.”

others who work with survivors of sexual abuse; and prevention education programs for students (pre-kindergarten through college).

The soothing sight of a fireplace greets visitors near the front door at both
ZCenter sites. In the warm, expansive lobby area in the Gurnee building,
Frank the Bear, a 5-foot-some-thing stuffed animal, sits casually at the
end of a couch to the left of the fireplace, one hind leg slightly bent.
Frank, Barnett assures me, moves around (presumably with the help of humans). ZCenter staffers hand a considerably smaller version of Frank to sexual-abuse victims in ERs. Instant comfort. ZCenter contains critical spaces inside, from art and play therapy rooms to a training room for its 100-plus volunteers, who served for more than a combined 3,600 hours in fiscal year 2018.

Chicago Bears rookies built the outdoor playground at the Gurnee location in 2015.

All ZCenter hallways are wide. For a reason. For a significant reason.

“A power dynamic does not exist when people walk side-by-side in a spacious hallway,” Barnett says.

Ali— the daughter of Jed, a doctor, and Robin, a teacher and former social worker—traversed thE paths inside academic buildings at Northwestern University, earning a degree in Learning and Organizational Change. She then oversaw, as an account manager in Aetna’s health- care IT consultancy, vital benefits tech- nology for large corporations. At NU she met another tennis enthusiast, Sam Barnett, who would net a PhD in neuroscience and embark on a career in the financial and healthcare industries. Sam Barnett and Ben Woldenberg were Highland Park High School tennis teammates and captured the doubles cham- pionship at the state meet in 2008.

Ali and Sam’s first date started with dinner and ended with a comedy show in Chicago. “I wanted to get to the show early so we wouldn’t be forced to sit near the front,” Ali recalls. “You know what stand-up comics often like to do. They like to pick on the audience members sitting near the f ront. They like to embarrass them.

They got married in 2016. They’re still avid tennis players. Sam, somehow, has found the time to play in professional singles and doubles tournaments in the U.S. and abroad. Ali continues to rely on her forehand, the one with a smidgen of topspin, in between yoga and Pilates sessions and cherished chunks of time with the couple’s Golden Retriever, Troy.

“The sweetest boy,” Ali says. “Troy is also well-behaved and smart. We’d like him to become a therapy dog someday.”

The day Barnett learned about Zacharias Sexual Abuse Center was the day she read the alarming statistics the center strives to reduce. Every year.

“I had also read victims’ stories,” she says. “So many adults, too many children, need help healing every day. ZCenter is a special place for them, I had discovered while researching it. I didn’t just want to work for a nonprofit, something I had thought about for a while; I wanted to be a part of an organization that’s positive and committed to advocacy and caring and prevention.

“All of us at ZCenter want to work ourselves out of our jobs.”