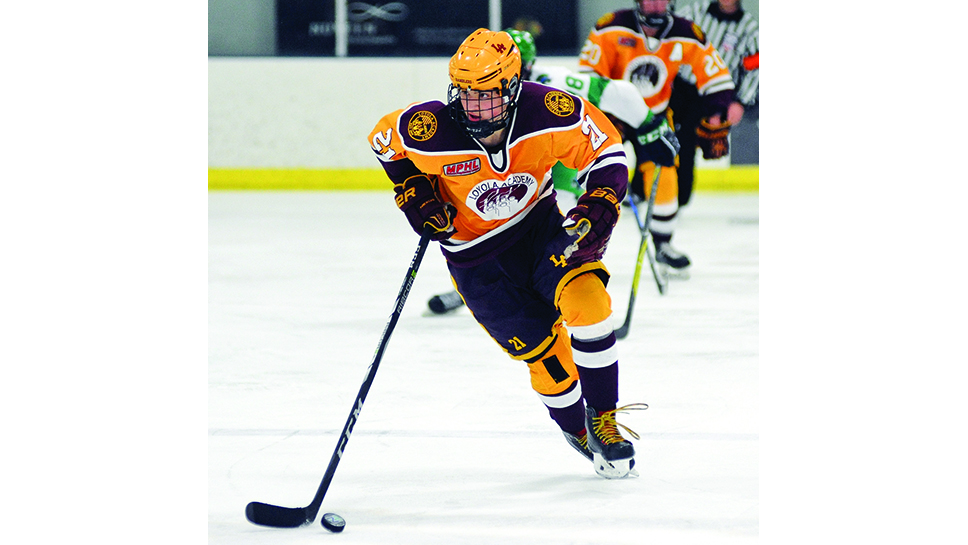 It was supposed to be a big day for a little guy atop his backyard ice rink. A pair of laced-up skates enveloped Eamon O’Brien’s feet for the first time. The Wilmette resident was an old 1-year-old back then, maybe a young 2-year-old.

But his skate blades never hit the ice that day.

“My dad [the late Tim O’Brien] put me on a sled and pulled me around the rink,” O’Brien, now a Loyola Academy senior, says. “He pulled my sister [Abigail] and my older brother [Devin] around that day, too. There we were, the three of us, in skates, all of us behind our dad.”

Some two years later, Eamon, in skates again, and his father, a youth hockey coach, entered Wilmette Centennial Ice Rink. That would be the day, at last, when the tyke would glide around a sheet of ice and envision doing what his dad did—play hockey for Team Gold, in the early 1980s—at Loyola Academy.

“Too afraid,”Eamon recalls.“My first time near a real rink, and I was too afraid to skate.

“My dad carried me around the rink instead.”

Eamon O’Brien did some significant lifting on skates this winter, helping Loyola Academy Gold reach the Amateur Hockey Association Illinois (AHAI) state championship game at United Center in Chicago for the second year in a row on March 22. Named the 2018-19 JJ O’Connor Male High School Player of the Year, the 5-foot-9, 160-pound O’Brien blasted a shot, after receiving a nifty drop pass in the first minute of the first period, toward New Trier Green sophomore goaltender Preston Watts.

Watts stopped it, and Green struck for two second- period goals in a 2-0 victory for the program’s 13th state championship under coach Bob Melton.

O’Brien, a year earlier, had helped LA Gold capture its first state title in 22 years with a 4-2 defeat of Stevenson High School. The consistent, loud reminder from the stands, the shouts from Tim

O’Brien—“Move your feet, 26!”—that Eamon had heard way more than 26 times during his Mite seasons in a No. 26 sweater must have had something to do with his steady development from fearful skater to fearless forward.

O’Brien, wearing jersey No. 21 as a teen, dished an assist in that state championship contest in 2018.

So claimed the score sheet.

“I don’t know,” says O’Brien, a speedy, spirited, sandpaperish winger. “I got credit for an assist, but I don’t think I deserved credit for it. Winning state, right afterward, it didn’t feel real. What a game, what a day that was. Exciting. After a big goal, the one by [Championship game Most Valuable Player] Nick Liebers, my helmet hit Nick’s jaw pretty hard during the celebration.”

Twelve LA Gold members from the 2017-18 season returned for another shot at experiencing pure joy on the home ice of the Chicago Blackhawks. LA’s skaters had entered last weekend’s big game with a 2-3 record against New Trier Green (62-7-1) this winter, including a 2-0 victory in the Scholastic

“Heart and grit, refuses to lose,” LA Gold co-coach DJ LaVarre says of O’Brien, one of four LA all-staters (with Liebers, goaltender Drew Shearson and Aidan Finegan) in a 49-13 season. “He picked up speed since last year and improved in all other facets of the game. But the jump he made from his sophomore season with us to his junior season was a big one, huge. Eamon is pretty quick, shifty. On the ice he usually provided us with an instant shot in the arm.

“Kind of quiet around the coaches,” the co-coach adds, “but I imagine he wasn’t so quiet around his teammates in the locker room. I’m guessing he had quite a locker-room presence.”

Eamon O’Brien’s future? Something related to business, likely. His father majored in business. Big brother and former Gold goalie Devin majors in business at Miami (Ohio) University. Eamon’s list of colleges he’s considering is down to three: Miami of Ohio, Iowa and Xavier.

Wherever he ends up, he’ll unpack his pair of skates in a dorm room.
And maybe, just maybe, a sled. Happy (snowy) trails, Eamon.

New Trier Green: New Trier’s Mark Ashmore masterfully tipped in a shot by John Kane in the second period, and captain Bobby Soudan notched his 35th goal of the season on a 5-on-3 later in the period in Green’s 2-0 defeat of reigning champion Loyola Academy Gold in last weekend’s AHAI state title game at United Center.

It was NT Green’s third state championship in four years and 15th overall.

Soudan was named Most Valuable Player of the game.