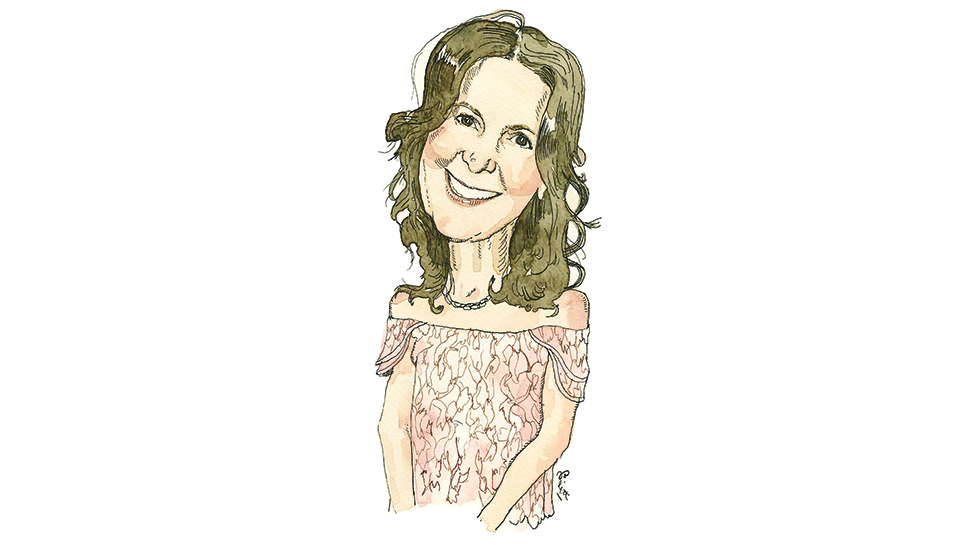 Art and cancer.
Cancer and art.
The two have had a connection in the life of Caren Helene Rudman since she stared at a blank canvas in her art studio at home, and it stared back at her.

On that stormy day some 15 years ago, before her first stroke of the paintbrush, Rudman received a phone call. The caller was her mother Susan Guthmann’s oncologist. The news: Rudman had tested positive for the BRCA1 genetic mutation. Five of Rudman’s great-aunts had died of cancer. Five. Five too many. A great-grandmother had died of cancer. Her sister Lori Loeb would die of cancer in 2013, at the age of 54. Her mother would die of cancer two years later.

Rudman returned to the blank canvas immediately after the phone call and made it come alive. For 75 uninterrupted minutes in her Highland Park home, with music blaring and teardrops streaming, the self-taught painter created a painting she would name “The Storm” on a day when a microburst hit the area.

It also was the day that Rudman, now the curator at The Art Center (TAC) Highland Park, took her first step on a figurative bridge— between health and disease. Surgeries would follow for the mother of four and the wife of puppeteer David Rudman, portrayer of Cookie Monster on Sesame Street and a co-founder (with brother Adam) of the children’s television production studio Spiffy Pictures.

“I am an artist and a curator with a mission to create meaningful work that explores both the fragility and strength of body and mind,” Rudman, 54, writes on her website, carenhelenerudman.com. “I believe art has the ability to heal, to bring people together, and to communicate.”

In 2010 she curated and participated in the TAC exhibition “Voices and Visions; Standing on the Bridge Between Health and Disease.” Artwork submitted in the first three years expressed the concerns about breast and ovarian cancers. Voices and Visions—“My baby,” Rudman says—then became a biennial event and expanded to include any cancer as metaphor.

TAC, a nonprofit, provides visual arts education to Highland Park and its surrounding communities, assuring access to the arts for all ages and cultural interests. It is dedicated to education in the contemporary visual arts through classes, outreach programs, gallery exhibitions, and events. “Making Art Available” is TAC’s simple, vital mission.

“I can’t believe I have my dream job,” Rudman, a freelance curator at TAC for seven years before landing the full-time post last year, says at a table at That French Guy Patisserie & Café in Highland Park. “What I’m doing at The Art Center, what I get to do, it’s a dream. And I never thought I’d be a visual artist. At a young age I didn’t think I could draw, and I didn’t take my first photography class until I was 22. People told me, ‘You’re good at writing; you should pursue that.’ But I was drawn to drawing and painting, to photography. I told those people, ‘No, no, I want to pursue a career in the visual arts.’

“Do what you love to do,”she adds,having ordered latte and French-style scrambled eggs. “We should all be lucky to be able to do that, right?”

Too shy to act in theater productions at Highland Park High School, Rudman danced instead. She majored in philosophy and minored in psychology and French at the University of Colorado Boulder, before earning a master’s of arts in 1992 at New York University (International Center of Photography program). She spent a year (1984-85) in France during her time at CU Boulder, studying art history. She wrote a lot in Europe. She fell in love with the arts in Europe. She recently taught art to sixth-graders at the Kibera School for Girls in Kenya.

Late last year, in Highland Park, TAC housed The Art of Giving Back gallery exhibit “Invisible Words.” It displayed signs that homeless people, from Illinois and other states, had created to communicate to drivers, to pedestrians, to anybody with eyesight. One sign announced, “This is awkward 4 me too.” The exhibit’s artist, Highland Park native and environmental activist Wendy Abrams, had interacted with the signs’ authors before offering to buy the signs. Yes, the powerful conceptual project raised awareness of homelessness issues. But it revealed something deeper, something meaningful.

“It helped build empathy , ” Rudman says. “It reminded people that behind each sign is a human.

Art isn’t always a pretty picture or a pretty painting on a wall. We see the signs held by homeless people, but how often do we read what’s on them? You’ve heard the saying ‘Home is where the heart is.’ Well, where does a person feel such affection if the person is homeless?” TAC hosted a special event last May, “Meet Nature Cat.” The free event for families featured eco-STEM ac-tivities with Nature Cat. Nature Cat is an educational animated children’s televi-sion series. Three men created it.

One has been married to Caren for nearly 30 years.

“Our worlds collided on that day,” Caren Rudman says. “David and I are artists. We both understand the work involved, the process of art.

Visit theartcenterhp.org and carenhelenerudman.com for more information. TAC’s Spring Benefit 2019, “Expanding Our Horizons,” is May 3, beginning at 7 p.m.