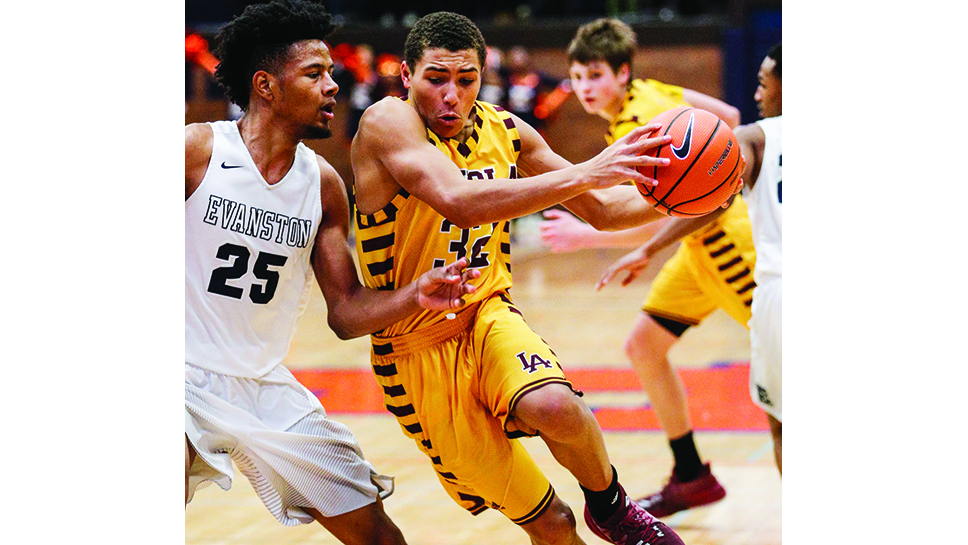 They could have passed for extras on a break from the movie Animal House. Or the flick Gladiator. Many of the Loyola Academy boys basket- ball student fans had donned togas for a Class 4A sectional final last weekend, lining rows of balcony seats in Niles North High School’s packed gymnasium in Skokie.

They were dressed to the … sheets.

Among the rabid contingent’s thunderous chants during LA’s game against Evanston Township High School on March 8 was, “Toga! Toga! Toga!”

But Evanston’s Wildkits—not Loyola Academy’s Ramblers—earned the opportunity to wear their hoops garments for at least one more game.

The sheets would have to return to covering beds full-time, their moonlighting tenure kaput after 32 minutes of intense basketball. Top-seeded Evanston, third in the Class 4A state tournament a year ago, defeated sixth-seeded LA 56-42 to advance to the Hoffman Estates Supersectional against Stevenson on March 12.

LA had also lost to Evanston in a sectional playoff game in each of the previous two seasons, once in a semifinal, the other in another title game.

“I’m really proud of our guys,” Ramblers coach Tom Livatino said outside his team’s locker room. “How we played in the playoffs was special. Our last three weeks, really, we played excellent basketball. High-character players on this team, gritty guys, no question. Some of the moments I enjoyed the most with this group were off the court. It’s a fun group, with great personalities. Great guys.

Evanston’s three-point shooting in the sectional final, particularly in the first quarter? Also great. The Wildkits (30-4) tallied all 21 of their points via the trey in the frame, missing only once in eight attempts. E-town’s boys sizzled from downtown.

“I’m not sure how many threes they hit tonight [12],” Livatino said. “But I do know it was raining.” LA (22-13) nearly overcame Evanston’s ’Kits and-dogs downpour. Livatino’s boys of winter limited Evanston to six points in the second quarter and trailed only 27-26 at the 6:10 mark of the third quarter, after a three-pointer by 6-foot-4 senior sharpshooter Connor Barrett (12 points, two steals), who had poured in a team-high 14 points (four treys, one field goal) in LA’s 44-29 defeat of Schaumburg High School in a sectional semifinal on March 6.

Barrett missed nine games in January and February with a stress fracture in his right foot. His team missed him, LA going 3-6 with Barrett in street clothes.

“Connor was courageous, coming back the way he did,” Livatino said. “He wasn’t close to being 100-percent healthy at any point in our playoff run. He played with grit, with moxie.”

Evanston outscored LA 13-5 after that Barrett trey to take a 40-31 lead after three stanzas. LA hung around, wouldn’t go away, for the first couple of minutes in the fourth quarter. A bucket by

“Evanston,” Livatino said, “is really hard to guard. Evanston’s players are great, experienced, skilled, tough to beat. It’s a team that takes you out of what you do.”

Kwiecinski’s twin, 6-8 Bennett Kwiecinski, finished with team highs of 13 points and eight boards. Both brothers present match-up night- mares for opposing coaches. Both dribble as well as most guards do. Both are capable of guarding considerably smaller players. Both are threats to either slither through post defenders for easy buckets or nail lengthy jumpers.

“Training and practicing,” Jordan Kwiecinskisaid of the primary reasons behind the twins’ impressive ball-handling abilities.“All our lives we’ve worked on playing like a wing.”

Ramblers senior guard Quinn Pemberton scored seven of his eight points in the first half of the sectional final, including a driving layup to open the scoring in the second quarter and a trey at 5:11 of the same quarter. The product from St. James School in Highwood also came down with three rebounds. Six of his nine points in the sectional semifinal against Schaumburg came from the free- throw line in the second half.

Schaumburg’s Saxons (24-7), seeded seventh in the sectional, found out in a hurry that trying to score against Loyola Academy’s relentless, smoth- ering defense is an unpleasant, difficult task, akin to five boys taking on five swarming octopuses. Schaumburg netted only two free throws in the first six-plus minutes of the first quarter and a faced a 32-16 deficit after two quarters.

A reigning state champion from Kentucky knows the feeling. In December it scored fewer than 30 points in a loss to eventual champion Loyola Academy in a holiday tournament in Florida.

“Each team we played in that Florida tournament ended up with a season-low point total,” Bennett Kwiecinski said. “That right there, the kind of defense we played down there, was the essence of our team this season.”

Notable: Loyola Academy junior guard Matthew Enghauser scored all five of his points in last week’s Class 4A Niles North Sectional semifinal against Schaumburg in the second quarter, the final three coming with 1.5 seconds left after his nifty spin move in the middle of a lane. The 6-foot-3 Enghauser got fouled after making the shot and hit the ensuing free throw. He also came up big in the third quarter, stealing a pass and later blocking a shot about a foot in front of the Saxons’ bench. Enghauser wound up saving the rejected shot from going out of bounds, and the ball ended up in the hands of Bennett Kwiecinski . … Loyola Academy’s boys basketball team won a third straight Class 4A regional cham- pionship, totaled more than 20 wins for a third straight year and topped St. Ignatius for its third consecutive Jesuit Cup victory in the 2018-19 season. … Livatino, on the Kwiecinski twins: “Bennett (12-plus points per game) turned himself into more of a scorer, and Jordan made tremendous strides as an overall basketball player. Jordan de- veloped, more than anything else, into a stopper. He embraced the role. You need defensive stoppers, want defensive stoppers. Jordan’s length didn’t stop him from guarding guards well, and his flexibility made us a better team on the defensive end of the court.”