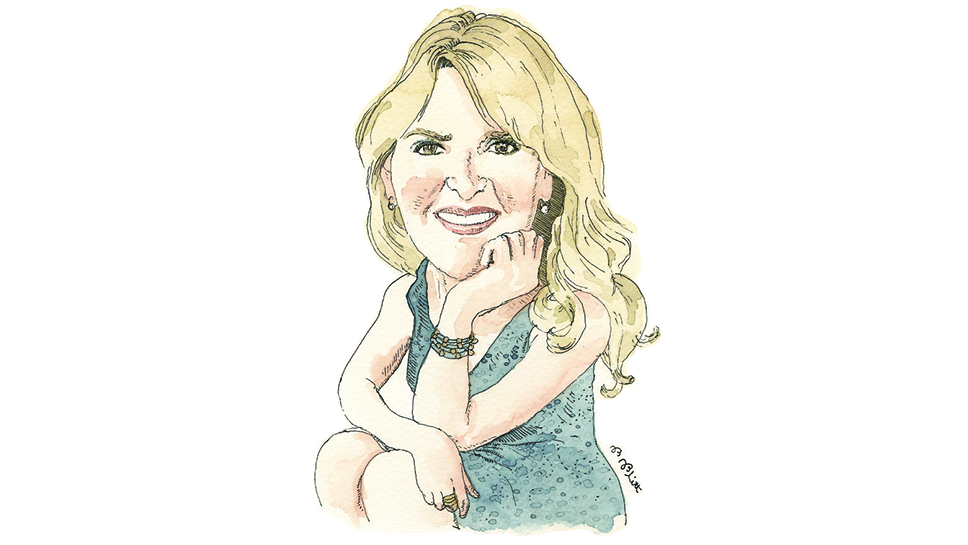 Phyllis Klein and I meet on a winter day, early afternoon, in Deerfield. An invitation had been extended to chat over breakfast at a restaurant, anywhere along the North Shore. The radio/television entertainment host known as “Front Row Phyllis” had checked her busy, busy, busy schedule and chosen the spacious lobby of the Hyatt Regency for our get-together.

No time for food.
I understood.
Thirty to 35 minutes in, Klein gives me afront-row ticket—the figurative kind—to one of her favorite childhood memories: time with her grandmother Minnie.

“Four times a week, I’d visit her at her home in Chicago,” recalls Klein, a graduate of now-defunct Niles East High School in Skokie. “I loved being there, loved being around her. We’d hold hands as she spoke and I listened. I thoroughly enjoyed listening to her. She was brilliant and old school. So spiritual, too, yet so real. She was easy to talk to, encouraging, and she spoke fluently in six languages.”

Phyllis Klein speaks fluent English and is ultra- adept at entertainment-speak, especially if the entertainment has anything to do with a musician or a band that is scheduled to perform in the Chicago area. Dolly Parton, Cher, Dave Grohl of the Foo Fighters, Frankie Valli, Robin Zander of Cheap Trick, Jim Peterik of Survivor, Brett El- dredge, members of the bands Bon Jovi, Fifth Harmony, Imagine Dragons and Panic! At the Disco, Peter Bjorn and John … some, just some, of Klein’s interview subjects.

“Front Row Phyllis” segments can be heard on WGN Radio and can be seen and heard on FOX 32-WLFD (“Good Day Chicago”). The segments disseminate information about concerts, festivals and events. They share enlightening tidbits and personality traits that Klein had elicited from the music giants during backstage interviews.

“I’ve been crazy-blessed to have been able to talk with people, well-known artists, who didn’t have to be interviewed but agreed to be interviewed,” says Klein, a Highland Park resident since 2004, a mother of two, an owner of three big dogs, and a big fan of the rock band Styx in her days at Niles East. “Musicians aren’t accustomed to being interviewed; they’re accustomed to performing in front of thousands of people.Their comfort zone is on a stage, not in a one-on-one situation.

“The trick I use, to get them to talk, to make them feel 100- percent comfortable? I bring up something casual or fun, some- thing you’d bring up at the start of a conversation with your best friend.”

More than 10 years ago a former colleague of Klein suggested Klein and a radio career would be a good fit. Klein had worked in finance for nearly 20 years. One radio gig led to another. Work at WGN Radio led to additional television work at FOX 32-WFLD. Her niche as a music maven established, Klein needed something catchy and alliterative to identify a viable brand for listeners and viewers.

“Somebody,” Klein says, “recommended that. I loved it right away. Got it trademarked. When I met Dolly Parton before interviewing her backstage [at Ravinia Festival in Highland Park, in 2018] and told her about it, she said to me, ‘You can’t use that! Everybody will ask you to get front-rowtickets for them.’ She laughed. We laughed together. Dolly was great, a real person, sweet and down-to-earth. We hugged before and after the interview, which lasted maybe 10 minutes; not much time. I’ve found out in this business that you have to make every minute count.”

Spending a minute or two in an interview with either Elton John or Usher would make her day. And her decade. Klein realizes a sit-down with John or at least a stand-up interview backstage with the multiple Grammy-winning singer/pianist/composer f rom the United Kingdom is highly unlikely, but there’s nothing wrong with dreaming.

“I’d ask Elton about the early years in his career and the differences he’s experienced in the music industry,” Klein says. “I’d also ask about where he sees the industry going. Usher? I think he’s one of the most talented musicians out there.” Her favorite outdoor venue is Ravinia Festival. Her favorite all-time concert at Ravinia Festival, to date, is a Train performance. One festival she’d recommend in a heartbeat is the Windy City Smokeout BBQ & Country Musical Festival ( July 12-14, at its new location, United Center’s parking lot).

“Music makes people happy,”says Klein, who works out six days a week to music—pop or country or theatre—she plays as loudly as she can.“Listening to music can turn a dark, dreary day into a happy one in a hurry.”

The professional life of “Front Row Phyllis” gets harried at times, challenging. There’s that concert at Ravinia Festival, followed by that concert in Chicago, followed by that concert in Rosemont. All in one day. North, south, northwest. Hustle, hustle, hustle. Klein almost needs a full-time logistics assistant at her side. But the ex- citement level that accompanies each opportunity to interact with a superstar in the entertainment world thrills the attentive granddaughter of Minnie, keeps her going. “I’d like to be the go-to person for entertainment information in the Chicago area, maybe even be considered ‘The Ryan Seacrest of the Chicago area,’ ” Klein, her everpresent smile widening, says. “Wait. Can I change that? I wouldn’t mind being considered ‘The Ryan Seacrest of the Midwest.’”