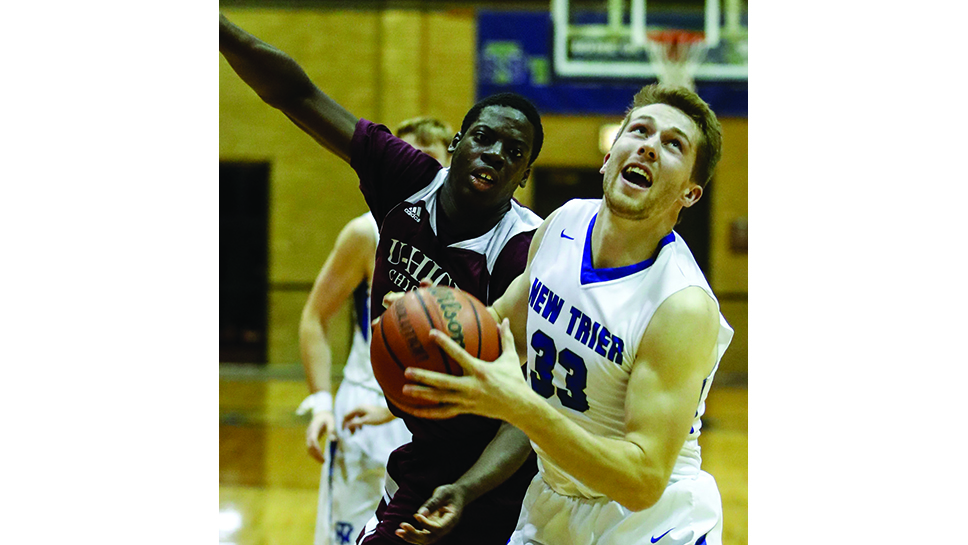 They walked toward an exit, in silence, in a hallway at Glenbrook North High School, their basketball season now history after only two playoff games.

Trevians senior forward Spencer Boehm caught up to Trevians senior forward Ciaran Brayboy in the hallway and draped his right arm around his teammate’s shoulders. The 6-foot-8 Boehm pulled the 6-9 Brayboy closer to him for a brief, consoling moment, a pair of adjoining trees in high tops trudg- ing to the team bus.

Boehm then broke the silence.

Last winter’s journey—New Trier achieving Sweet 16 status, before falling to Evanston Township High School in a sectional final at Maine East High School—featured heroics from starters and reserves and an unforgettable, double-overtime win over Niles North in a sectional semifinal.

“So special,” Trevians coach Scott Fricke said after last weekend’s loss, referring to the Harvard- bound Brayboy, the Washington (Missouri) University-bound Boehm and the rest of his seniors this winter. “Winning close to a [combined] 50 games the last two seasons, starting the way we did this year [7-1], getting ranked as high as sixth [by the Chicago Sun-Times] at one point in the season, I’m proud, really proud, of the way our guys competed last year and this year.

“I told all of our guys after the game tonight,

‘Remember the good stuff that happened this season, not what happened in one game, this game.’ ”

New Trier relied on its post players early, scoring seven of the regional championship’s first 10 points on a powerful inside move by Boehm (plus his ensuing free throw) and back-to-back buckets in the paint from Brayboy, who recorded team highs of 15 points and six rebounds.

A Brayboy put-back increased NT’s lead to 14-9 with one minute left in the first quarter. The plan to pound, pound, pound and wear out the opposi- tion’s post players was working. But Schaumburg’s

Saxons tallied the final four points of the frame and limited NT’s Trevs to only three free throws (two by senior guard Peter Burnside, one by junior guard John Carragher) in the second quarter.

Schaumburg led 24-17 at the break and broke NT’s spirit with an 11-0 run at the start of the fourth quarter. Following another Brayboy put-back (NT’s first points of the final quarter), Saxons senior guard Mike Hodges hit back-to-back treys in a 47-second span, expanding the advantage to 50-29 at the 4:26 mark.

“Schaumburg ended up doing a good job preparing to defend our sets,” Boehm, standing outside his team’s locker room, said after pouring in 10 there, though, still in it [down 29-25 at 4:25 of the third quarter].

“It’s tough now; this is tough, the end of our season, but we had a lot of fun this year. I sure had a lot of fun. Our team was selfless. We had a lot of different leading scorers in games. We won three games at the [highly competitive] Pontiac Tourna- ment.”

They lost valuable senior Samuel Silverstein, a versatile 6-5 guard, for the remainder of the season in January. “Silvy” suffered broken wrists during a dunk against Niles North.The loss of a player with the wingspan of an O’Hare runway hurt NT at both ends of the court.

Brayboy also had to sit out games because of an injury in January.

“Boom—just like that, injuries happened,” Fricke, his head shaking, recalled.

The winner of that game faces the Glenbrook South-Evanston semifinal winner in the sectional final on March 8 (7 p.m.).

Ramblers senior Quinn Pemberton led the team with 12 points against the Hawks in a game that was tied at 12 at the half. He finished with three assists, as did teammates Connor Barrett and Bennett Kwiecinski. Barrett netted 11 points, and Kwiecinski (seven rebounds, two blocks) scored nine.

LA did not earn its first lead, 33-32, until Kwiecinski hit a free throw at 1:42 of the fourth quarter. A Pemberton layup increased the advantage to three points.