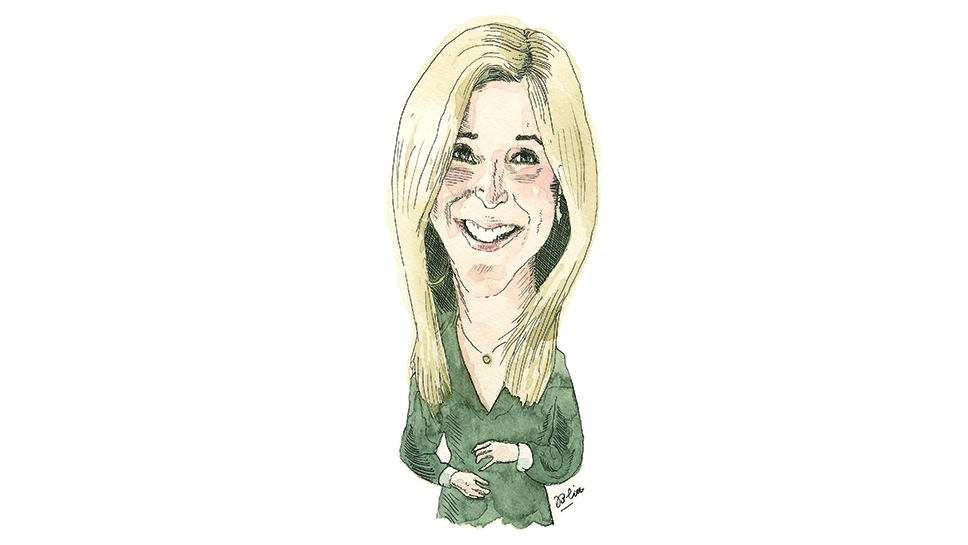 Abbie Weisberg hits the treadmill at her Evanston home and runs. It’s another day in the life of the Keshet executive director/CEO, another chance to clear her mind. She likes to thump-thump, thump-thump the continuous belt in her free time. Her mind will get a workout in later, probably on a couch not too far from that heartless exercise machine.

Mind races next.
“I like to reflect on that couch,” Weisberg, now sitting on a booth seat at Country Kitchen in Highland Park, says. “I like to brainstorm, too. It’s a spot where I like to relax, but sometimes I think too much on the couch because I have all these Keshet-related ideas, all these plans. More often than not I want to share what I’m thinking.

“Email,” adds the cancer survivor and 54-year-old mother of three. “I also like to email from the couch.” Keshet, in its 37th year, is inter- nationally recognized for its leading-edge services for individuals (ages 3 to 22) with disabilities. More than 70 sites in the Chicago area—including two in Highland Park—implement Keshet’s programming. Its noble mission: To do whatever necessary to allow individuals with disabilities to achieve their potential.

Keshet (“rainbow” in Hebrew) wasn’t always a Sunday-to-Saturday commitment for Weisberg, a Wilmette native who orders two poached eggs and a plate of cucumber slices on the morning of a busy Wednesday in February. Some 30 years ago, shortly after attending her first Keshet Annual Rainbow Banquet with a friend who had invited her, she was a Keshet Sunday School teacher on her first day, going over the Jewish holidays for a classroom full of 8-year-olds in Northbrook. The setting energized her. The interactions with the students emboldened her. She would teach on Sundays for a year. And for the next 13 years.

Weisberg got named executive director/CEO in 2008.

“It’s not a job to me, never has been, never will be,” says Weisberg, who attended New Trier High School, where she portrayed Anita in the musical West Side Story, and majored in therapeutic recreation with a minor in special education at the University of Illinois. “It’s been my love and passion and an important part of my life for years and years. I’ve met phenomenal people through Keshet, traveling all over the country. It’s been a privilege for me to give back, to make a difference in the lives of others, to represent the only organization of its kind that stands by people with disabilities, and their families, for life.”

In Illinois about 25,000 adults with disabilities, including nearly 1,000 Jewish adults, are on waiting lists for residential placement. The state has a Housing issue and its last name is Crisis. Each adult waits at home, fre- quently with elderly parents who are no longer able to fully meet the needs of their child. Loneliness in such a living arrangement often becomes a way of life for the adult with a disability.
Keshet aims to combat that feeling of isolation by providing supervised residential options, along with educational, recreational and employment opportunities.

“Keshet,” Weisberg says, “cares about the whole person, year-round. We strive for creating that sense of family, that sense of belonging, for each of our Keshet individuals. We’re all about integrating our students and campers and employees, as well as Keshet residents, into communi- ties. The experience a Keshet resident has? We want that to be as fulfilling as it is for the won- derful people around them— volunteer buddies, students, co-workers.

“What I want for my children I also want for every child with a disability.”

Weisberg and her husband, Mitch (“My arm candy,” Abbie says), have three daughters: Zoie, 28; Shayna, 26; and Sophia, 24. Zoie teaches at a Keshet school in Chicago, Shayna works at a Keshet house in Highland Park, and Sophia, who has a job in the financial industry, serves as a steady Keshet volunteer. None of the daugh- ters reports to her mother.

Many years ago Abbie Weisberg was asked to speak at Northwestern University about volunteer opportunities. Zoie accompanied her, as did Zoie’s friend Mollie and Avi, a Keshet participant. Avi was fascinated with the diversity of the audience members and couldn’t hide his unbridled interest in seeing them, in being there. The audience members were smitten with Avi’s enthusiasm. Avi, years later on a Keshet trip to Las Vegas, engaged in a lively conversation with a cab driver, talking food and world capitals, among other topics. They sang a song together, too, right there in the taxi.

“Northwestern asked me to come back the next day and speak again,” Weisberg recalls. “I told them I couldn’t. Then they asked me, ‘Is Avi available?’ ”

Count on Carol Marin, the Chicago-based television and print journalist, to share at least a few Keshet anecdotes at the Rainbow Banquet at Hyatt Regency Chicago on March 10, Day 10 of Developmental Disabilities Awareness Month and the day Abbie Weisberg turns 55. Keshet chose Marin as its Special Parent Speaker. She and her husband, Jonathan Utley, are parents of Keshet alumnus Gideon Utley. The annual event will honor longtime Keshet supporters Sy and Nancy Taxman; supervised residential options for adults with disabilities continue to grow because of the generous Taxman Family Foundation.

And Jewel-Osco earned Keshet’s Employer of the Year nod for its ongoing commitment to employing people with disabilities at its nearly 200 stores in three states.

“My first banquet, when I was 26, maybe 27, I’ll never forget it, never forget the parent who spoke and the way he delivered his powerful message,” Weisberg says. “He was an OB. His daughter was between 2 and 3 when he walked into her room and realized … his daughter had a disability. I learned a great deal about Keshet and the wonderful things it does for families on that night.

“I remember thinking, while sitting at a table next to my friend, ‘I want to be a part of Keshet.’”