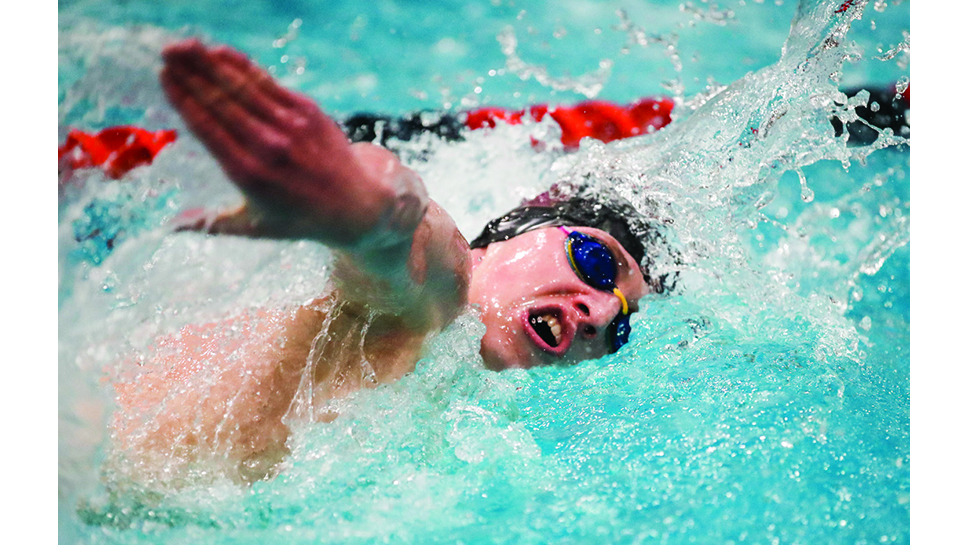 Towering above a handful of 5-foot-something, sore-necked journalists following his second state championship (100-yard freestyle, after having topped the field in the 200 free five events earlier) on February 23, Maurer had to field questions, too many, about … Maurer. Not exactly his favor-ite subject. The giant with the teensy ego responded to a query about training concurrently this winter for the 100 free and 200 free eventsby saying, “It meshed well for me.”
He paused.
He widened his smile, slightly.
Maurer then concluded, “I guess it worked out pretty well.”
It certainly did. Seeded first in the 200 free

A-Final—thanks to his blistering 1:36.45 in a state preliminary heat on February 22—Maurer clocked a 1:37.33, comfortably ahead of Fenwick senior Liam Hutchinson’s runner-up time of 1:38.16. The clear favorite in the 100 free was three-time reigning 50 free state champ Topher Stensby, the Stevenson HS senior with a seed time of 44.31. Maurer stunned the Patriot, churning and zipping to a first–place 44.33 to Stensby’s second-place 44.71.

“When Luke did what he did in the 100, our section [of bleachers on deck] erupted,” Ramblers coach Mike Hengelmann said after the meet. “His 44.3 … I still have goosebumps. He’s such a happykid. It’s fun, watching him swim, watching him race. He swims for the team. Does everything for the team.

Rambler Maurer, of Wilmette, owns the program records in the 100, 200 and 50 free events, the 50 free mark coming as the lead-off leg for LA’s 200 free relay at a sectional meet last month. Guess who had held the previous school records in the 100 and 200?

“My dad and I, it’s a friendly rivalry, with the occasional fun trash-talking thrown in there,” said Luke, whose mother, Lea, captured a gold medal as a member of the U.S. women’s 400-meter medley relay at the 1992 Summer Olympics in Barcelona. “Both my parents have spent so much time in the sport. Both have helped me grow as an athlete and as a person.”

Ramblers’ arms grew this winter. LA’s swimmers lifted, lifted and lifted some more in the weight room, drenching the T-shirts they often wore, the ones with THE ARM FARM printed across the back.

“Nobody on our team shouted ‘arm farm’ louder than Luke did; he’s our farm’s most valuable swimmer, has to be,” said Ramblers junior Everet Andrew, who, as a No. 15 seed, silvered at state in the 500 freestyle in a school-record time of 4:31.17—a time that supplanted an LA mark that had stood since 1978.

“Great captain, great friend, great leader,” he added. “Luke is all of those. Those two golds he took today? I saw them coming from a mile away.” Maurer and Andrew swam on both of LA’s 12th-place relays at state last weekend. The two combined with senior Benjamin Dukes and freshman Lachlin Andrew for a 1:26.54 in the 200 free and collaborated with Dukes and freshman Demetrios Zemenides for a 3:09.29 in the 400 free. Team LA also placed 12th (49 points).

New Trier HS: It’s always a good thing, if you’re a competitor, to leave the boys swimming and diving state meet a little heavier than when you arrived.

Trevians junior Pearce Bailey did just that, collecting three medals in the home natatorium February 23. The understated sprinter touched sixth in the 50 free (21.11), finished 12th in the 100 free (47.04) and swam the second leg on NT’s 10th-place 200 free relay (1:25.95, with classmate Marc Hagist and seniors Topher Shepherd and Nick Torre).

He was a little long (costing him precious time) near the wall on his second turn in a 100 back-stroke preliminary heat at the state meet last weekend, but he shortened the time it took him to complete the distance in a B-Final heat the next day.

Vorobev placed eighth in the 100 back in 50.42—significantly faster than his prelim effort of 51.55.