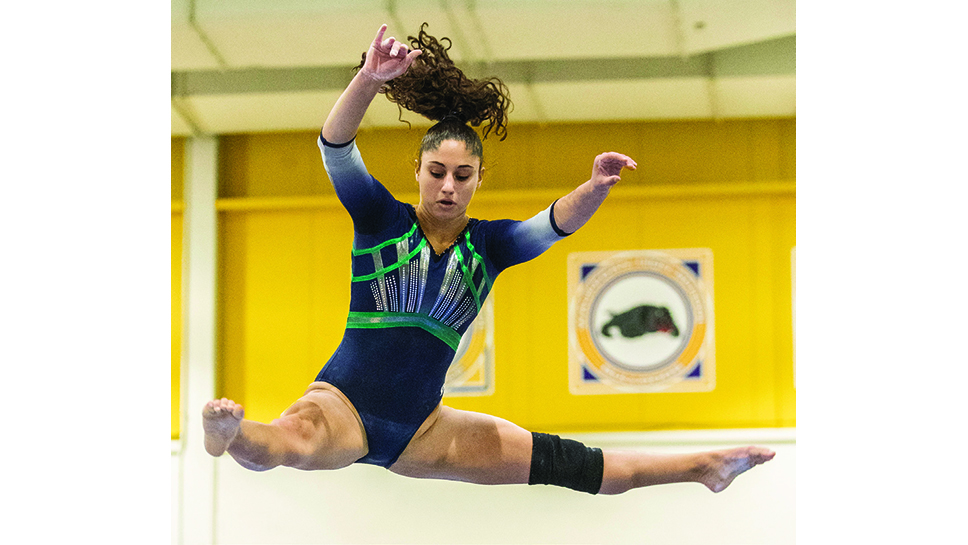 A gymnast’s routine on the balance beam usually lasts 90 seconds.

People typically spend more time than that brushing their teeth in the morning.

New Trier High School senior gymnast Zoey Spangler competed for the Trevians on the beam— her only event—at last weekend’s girls gymnastics state meet at Palatine High School. The 5-foot, four-year varsity athlete did not come up big in her scant 90 seconds in the spotlight.

“What she did for us was huge … huge,” NT coach Jen Pistorius said of Spangler’s 9.4 routine in the meet’s preliminary session on February 15.

“Zoey’s my beam queen.”
Spangler, a quad-captain, had entered the meet

only as a member of a state-qualifying team, her mid-8 score on beam at a sectional falling short of at-large status for state advancement as an individual.

New Trier’s first event in the prelims was beam. Its first two performers fell. One hundred eighty seconds, two hiccups. Spangler was next. Another fall would have deflated the team some more.

“I was just trying to help the team,” the humble Spangler, revealing her mindset for the pivotal gig, said a day later.

She nailed the routine. Her teammates and coaches and the NT fans in the stands erupted post-dismount, most of them expressing joy, the others relief. What a way to walk away from a gymnastics career.

Spangler might still be sore, today, from the bear hugs she received afterward.

“Zoey was so, so, so solid,” New Trier junior Maeve Murdock, a beam finalist last weekend, said. “She overcame so many mental challenges on beam. Love her. I’m proud of her.

Lifted by a specialist early, Team New Trier relied on its talent and depth from there, totaling 147.325 points after the four events. That ranked second to reigning state champion Glenbard West’s 148.85. Pistorius’ crew then withstood challenges from Maine South (147.25, third place) and Glen- brook South (147, fourth) in the state finals session on February 16. NT ended up with 147.525 points—thanks to junior Avery Faulkner’s seventh- place 9.45 floor-exercise score; the two-tenths-of- a-point improvement from her prelim mark in the event got added to the team total.

Trevians senior Darcy Barkal, a quad-captain and NT’s only other senior on its state team, advanced to the state finals session in two events, vault and uneven bars, and finished eighth in each (9.5 on vault, 9.325 on bars). She shook off a tender left knee, a year after being forced to scratch as a vault finalist at state because of a severely injured ankle.

“I did not expect to make it to finals on bars,” admitted Barkal, who bounced back impressively after falling in her first two events (beam and floor) in the prelim session. “My teammates gave me a pep talk during a break [before the team’s third event, vault], reminding me that my strongest events were coming up, that everything would be fine. They were great. They were supportive.

“All season long,” she added, “our team had constant energy and was constantly cheering.”

Murdock—the beam state co-champion as a freshman,in 2017,with Pistorius’daughter Caleigh (then a Maine South sophomore)—finished seventh (9.15) on beam last weekend.

“We knew we could do it,” Murdock said of at least tying that NT team’s lofty state finish in ’92. “There’s a banner in the gym where we practice, and we look at it all the time. It tells us, reminds us, how well that 1992 team did. I’m so proud of this team, of our captains (Barkal, Spangler and seniors Erin Murdoch and Ari Solot).”

Spangler’s 9.4 beam score would have been high enough, easily, for a finals spot had she advanced to state from the Stevenson Sectional as an individual qualifier. But she’ll have to settle for performing one of her elite team’s most memorable routines at her final gymnastics meet.

Not a bad consolation prize.

“I learned a lot as a gymnast, learned a lot about myself,” Spangler said. “Bad routine? All you can do after one, all you should do, is keep going, remain positive and stay focused on what’s in front of you.”

LFHS freshman Taylor Cekay—the reigning Stevenson Sectional champion on the balance beam—finished in a tie for 32nd place (8.325) on beam.

“I was excited to make it to state, and I was excited for how well Kristin did,” Cekay said. “She inspired me. Before the meet she told me to stay calm and be confident. Kristin also told me, ‘Re- member, you’re here because you deserve to be here.’ ”