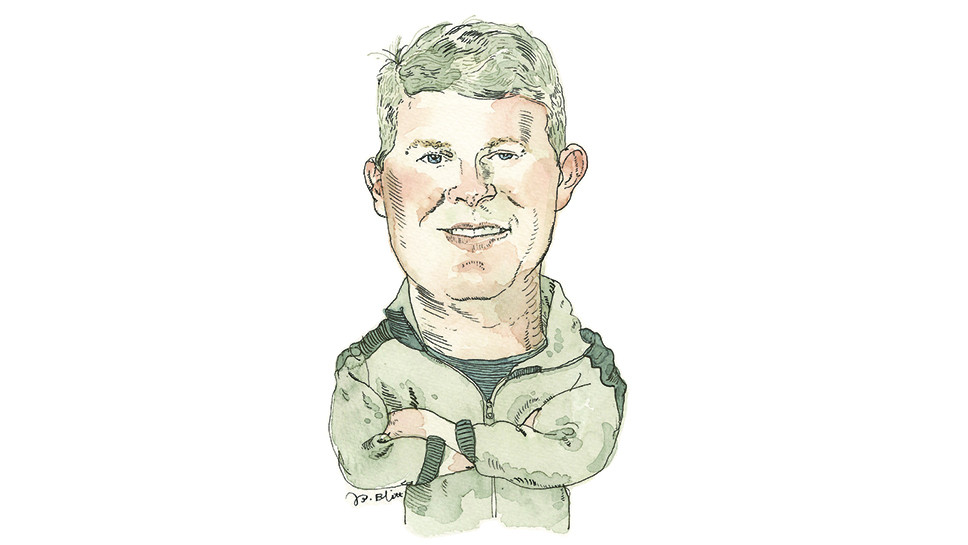 He runs around and around at one end of a soccer pitch before every New Trier High School varsity girls soccer match in the springtime, camping under corner kicks, jumping to head soccer balls toward a goalkeeper, sweating, barking some- thing encouraging to one Trevian or smiling playfully at another—the teen he had just burned.

Jim Burnside, 6-foot-3 and 51 years old going on a saucer-eyed 15, is the hustling, fun-loving man among Trevians in the warm-up session.

“I’ve fallen a few times, doing that,” the former New Trier and DePauw (Indiana) University soccer goalkeeper says from a booth seat at Ridgeview Grill in Wilmette, his hometown today and back in the day. “I’ve gotten hurt, yes. One time I remember thinking, That ground used to be a lot softer.”

Why, Jim, why? Why risk tearing a hamstring or suffering a high ankle sprain that might not heal fully until 2022?

“It’s the summer camp counselor in me; I don’t think he’ll ever leave,”admits a grinning Burnside,

a summer camper at Camp Highlands in Sayner, Wisconsin, for nine years and a camp counselor there for six more. “My experiences at camps were huge. Had quite an impact on me, and they taught me a lot.”

Burnside—in his 26th year at New Trier, the last 22 as the school’s extraordinarily successful varsity girls soccer coach—taught biology, mostly AP bio, at NTHS for 24 years before hanging up his lab coat and boxing up his microscopes to become assistant athletic director under NTHS AD Augie Fontanetta at the start of the 2017-18 academic year.

The son of Suzette and Pete Burnside, a left- handed pitcher who appeared in nearly 200 Major League Baseball games from 1955-63, Jim has guided six NTHS girls soccer clubs to state championships, including three straight (2014-16), during which his defenders and goalkeepers re- corded 21 straight postseason shutouts. Twenty-one. In. A. Row. Go ahead, read that again and attempt to grasp such an incredulous streak.

“I feel fortunate, will always feel fortunate, to be a part of our girls soccer program at New Trier,”says Burnside, whose previous two teams earned state runner-up honors. “The kids …the kids make this happen, produce all the success.They’re great kids, hardworking kids, talented kids. What I’ve stressed for years is something I say nonstop, and that is, ‘Serious fun.’ I applied that approach in the classroom, too. If you’re not having fun while striving hard
for a win in a sport or for an ‘A’ in class, you shouldn’t be doing it. As a coach or as a teacher, I like to start out tough, end up fun.

“Our soccer practices, they’re pretty intense at times,” he adds ahead of the arrival of his loaded omelet, crispy hash browns and whole wheat toast. “There’s structure in each, purpose. But while we’re crushing each other in practice, we’re also having fun along the way.”

He was a counselor, she a lodge girl. Both were DePauw students. Their eyes met in the camp’s dining hall.
Love at first … bite? Jim played it cool at first. “I didn’t want to seem too eager,” he recalls. Jim eventually disarmed the Virginia native with his sense of humor, launching a six-year courtship. “Making her laugh was all I had going for me,” he says. “My looks? Not good.”

He flew to Virginia to ask Annie’s father for Annie’s hand in marriage. The plan was to stay in Virginia for two days and then get on with the business of proposing. Burnside changed his flight home after two days in Virginia. He changed it again two days later. A frequent flight changer program did not exist, so, finally, on Day 5 of his extended visit, Burnside summoned up the courage to ask for Annie’s hand.

Jim and Annie have three children—Aidenn, 22, named after a 16-acre lake in Oneida County, Wisconsin; Piper, 20; and Pete, an 18-year-old senior who shoots basketballs and pitches baseballs for varsity teams at NTHS.
Annie Burnside, a former teacher, is an award-winning author. Her book Soul to Soul Parenting, published by Dead- wood, Oregon-based Wyatt-MacKenzie in 2010, is a guide to raising a spiritually conscious family. She also wrote From Role to Soul: 15 Shifts on the Awakening Journey (2014). “My wife is kind and insightful, a woman who fully understands the importance of connecting with people, of interacting with people,” Burnside says. “She’s my role model, and I attribute a huge amount of my success in coaching to her.

“The major turning point in my life? That’s easy. That’s clear. It was meeting Annie.”

Annie’s husband cherishes time with his family. Any time, anywhere. If it’s outdoors, all the better. Got a hankering for pork shoulder or smoked salmon? Jim’s your man, your cook, your tongs-toting maestro over his Green Egg Smoker. His favorite all-time purchase, to date, is his Ford F-150 pickup truck.

Among his many endearing traits?

“I can’t believe you want to write about me,” a head-shaking, chuckling Burnside says. “Seriously, why me?

Why are you interviewing me? You’re scraping around at the bottom of the barrel, right? You must be. I’m not a smart guy. I’m just a guy who tries to simplify things for others; I especially liked doing that for my biology students, either with a visual or by introducing something to them that I thought would make them laugh. I don’t set a lot of rules, but I’m a rules follower.

“My simple message to my soccer players each season is, ‘Be on time, clean up after yourself, be a good teammate, be a good person.’ ”

Unsaid: Be aware, be very aware, of a determined coach soaring and tilting to greet a corner kick with his forehead in pre-match minutes.