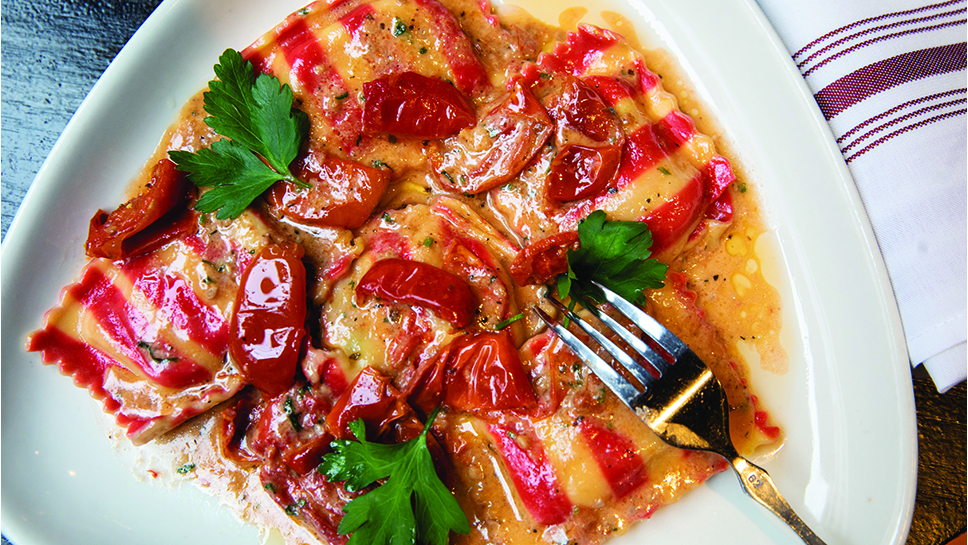 You have to hand it to Ron Onesti, the unabashedly proud Italian-American concert producer who operates the Arcada Theatre in St. Charles. The man’s got courage—and likely a steady stream of marinara running through his veins.

At a time when eating carbs, in some circles, can be as perilous as a plate of blowfish, some might have fretted about anchoring a pricey new downtown Evanston concert venue with a restaurant devoted to Italy’s favorite pillow-shaped starch bomb: the humble but versatile raviolo.

Not Ron. Should the name of his new old-school trattoria—Rock ‘N Ravioli—fail to tip you off that he believes the days of South Beach Diet are numbered, note the restaurant’s portrait gallery, which depicts various rock stars—Dean Martin, Kiss, Frank Sinatra—gorging on one ragu or another.

Technically, you’ll find a couple carb-free outliers here—perhaps the Tayla Shtreet sawsage n peppuz appetizer or a roasted veggie pizza on cauliflower crust—but if you’re not going to eat like you’re saddling up to Uncle Vito’s table, you’ve got the wrong place. There are more than a dozen raviolis here, many of which the waitstaff informed us were adapted from Onesti’s own recipes.

Although there may be a market somewhere for coconut-topped Caribbean shrimp ravioli in a Malibu rum sauce, it ain’t here. Surprisingly, the best dumplings on the list happen to be the American-Italian options, with an accent on the American. Can’t go wrong with the short-rib stuffed ravioli wading in a thick brown gravy that tastes like Grandma’s pot roast. Or the house’s signature Maine lobster ravioli—striped like a pink zebra—which has a New Jersey-meets-the-coast-of-Maine swagger to it.

In typical Italian style, you’re going to get giant platters filled from edge to edge. But should you want a side, try Ron’s “world famous” meatballs, which stick just close enough to tradition— spongy, baseball-sized, with a nice garlicky tomato sauce—to earn a nod.

Otherwise, there are plenty of sandwiches and pastas, each named—with tongue firmly planted in cheek—after rock stars or crooners. Although we were tempted to take a run at the Meatloaf pizza (maple-cured bacon, sausage, pepperoni) or

the Fleetwood Mac Anna Cheeza (cheese-smothered ditalini pasta), we played things safe by ordering the Pat Benatar: a simple but effective play on a Margherita pizza with fresh mozzarella and grenades of acidic cherry tomatoes.

But in the end, we were most impressed with the house’s simple, maple-glazed salmon set in beurre blanc with a side of veggie salad, which was trumped only by a genuinely refreshing dessert: A frozen lemoncello gelato and cream parfait which spindles together the bittersweet chill of a lemon ice with the creaminess of a Cool Whip sundae.

Conventional? Certainly not, but this much is certain: like the Chairman of the Board himself, Onesti seems more than comfortable doing things his way.