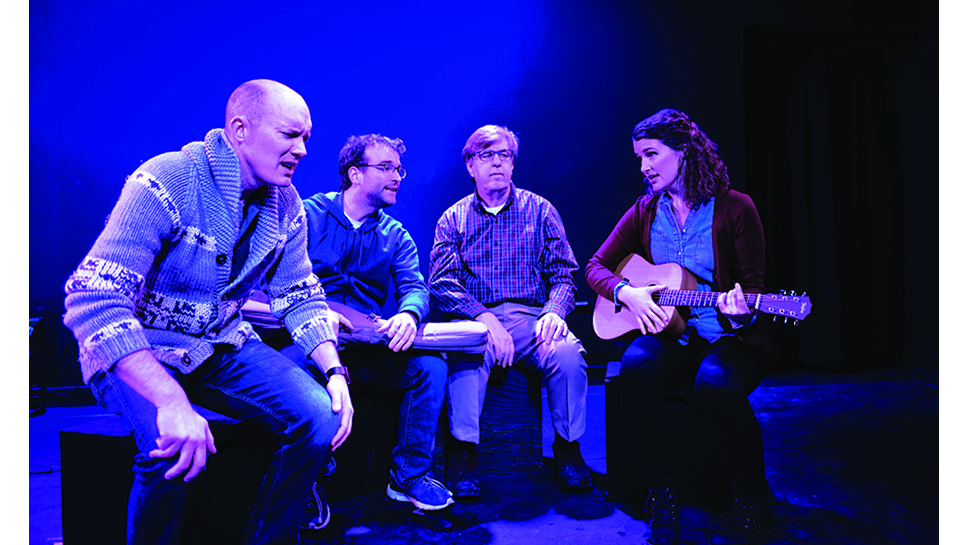 Cast members of the musical Cancerman. Photography by Robin Subar

It’s an old Hollywood line, “What I really want to do is direct.”

What J. Linn Allen—former Chicago Tribune journalist, teacher and Chicago Reader theatre critic—really wanted to do was to write musicals for the stage. Long since retired, the Evanston resident has seen, in recent years, his deferred dream come to fruition in several award-winning productions.

His newest musical, Cancerman, is a part of the lineup at this month’s 5th annual Chicago Musical Theatre Festival.

Produced by the Underscore Theatre Company, the Chicago Musical Theatre Festival spotlights new works and offers playwrights the invaluable opportunity to see their work performed in front of an audience.

“It’s fantastic,” Allen says. “A play has to be in front of people to get a sense of what it is. You can’t really know what you have—even with a reading by the cast—unless you hear how an audience responds. With Cancerman, now I can say, ‘This is what it is.’”

What Cancerman is: A story of a cancer patient, who, in his waning days, hopes to foster reconciliation with his estranged family by writing a song for his granddaughter Hayley’s wedding. Allen was inspired by Atul Gawande’s book Being Mortal: Medicine and What Matters in the End.

“It’s about the intimate reality of having a terminal illness,” says Allen, 79. “Maybe because of my age, I had an immediate desire to put a human story to it and give it a musical voice. People don’t like to talk about death, but I felt like embracing it.”

Allen grew up in Hyde Park. His was not a musical household, noting, with a laugh, “I’m a terrible piano player.” But he was in thrall to Broadway soundtracks. Kiss Me Kate made an early impression, he recalls, as did a family outing to the Goodman Theatre to see Porgy and Bess. He was around 10 years old then.

Musicals “cut to a deeper part of me that [non-musical] plays might not, although they can be very emotional,” he says. “The addition of music just gets to me.”

Allen wrote his first musical for a freshman class production in college. But writing plays, he allows, didn’t make economic sense to him.

Allen was a writer and editor for the Tribune for 23 years, retiring in 2002. Prior to that, from 1978- 86, he wrote theater reviews for the alt-weekly Chicago Reader. He moved to Evanston in 1980.

“It was a thrill, but also a disaster,” he says. “I had invited a lot of people, but there was a freak snowstorm and practically no one showed up.”

He has enjoyed a better track record since becoming an ardent playwright.

His musical Muffins, set in a struggling café, won Best Music honors at the MCL Theatre’s Premier Premieres festival in 2016. The Anarchist Girl was a winner in the 2014 Academy of New Theatre/ New Musicals Inc. International Search for New Musicals and was performed at the 2015 Stages Festival in Los Angeles.

Allen considers the songs in Cancerman to be the best he’s written, and he’s “incredibly excited” by the cast, which includes Ana Maria Alvarez, Emi Lee Frantz, Sarah Hayes, Bill Kavanagh, John Leen, Shaina Summerville, and Timothy Sullivan. He is also buoyed by the surge in popularity of movie musicals, such as La La Land, and the cross- over popularity of such shows as Hamilton and Dear Evan Hansen. The recent spate of musicals produced for television, most recently Jesus Christ Superstar and Rent, is creating a new audience for musicals, he gushes.

As for Cancerman, Allen acknowledges that it deals with a dark, difficult subject, but it’s also warm and funny. Perhaps he could tweak the title to something more audience-friendly?

There have been discussions about this, he says.

“My director,” Allen adds, “thinks I should call it ‘Fiddler on the Roof.’”

The final show of the Cancerman run at the Chicago Musical Theatre Festival is Feb. 24, 3 p.m., at the Edge Theater, 5451 N. Broadway, Chicago. For more information visit cmtf.org.