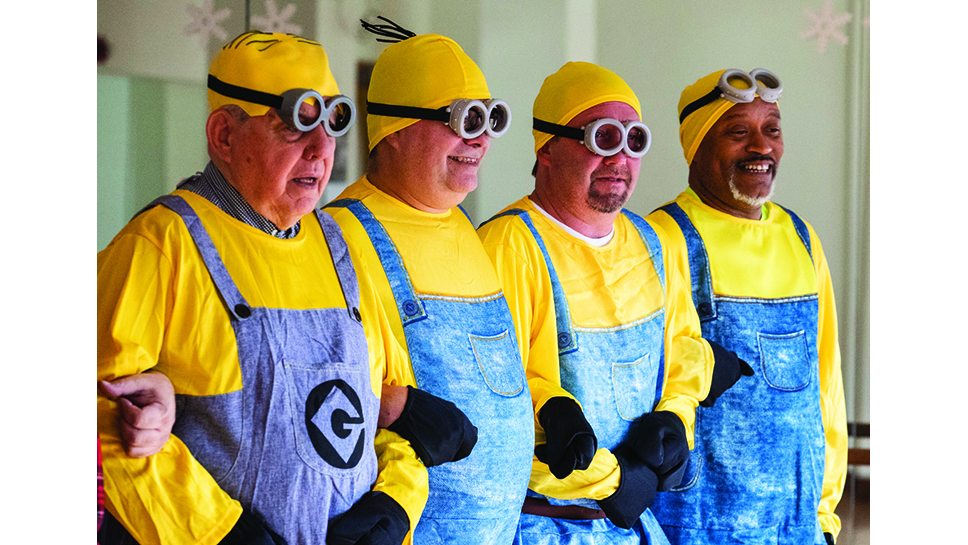 North Shore youngsters of all ages and abilities have myriad opportunities to perform in amateur theatrical productions, whether it be through schools, community centers or acting studios.

Those outlets, sadly, all but disappear when kids transition from the world of make-believe to adulthood—at which point live theater becomes largely the domain of trained, professional actors.

But life is a cabaret for the determinedly fun-loving members of the Village Follies, a thriving company of grown-up, community thespians currently enjoying every minute of rehearsals for its 2019 variety show, Fractured Follies’ Tales.

It is set to run and draw roars of laughter at the Winnetka Community House (WCH) March 8-9 and March 14-16.
For the past 40 years, the Village Follies has provided an escape for suburban adults of wide-ranging ages and theatrical abilities, while simultaneously raising nearly $15,000 to support the WCH, an educational, cultural, and recreational hub on the North Shore.

Working collaboratively each winter, this troupe of 35-40 adults writes an original variety show that’s reportedly as fun for the performers as it is for the audience.

Laura Chaveriat and her husband, Dave Impey— both trained singers—have participated in Village Follies productions for more than a decade.

“We auditioned 13 years ago and had a blast,” recalls Chaveriat, a Wilmette resident who works in educational publishing.

“It’s one of the few amateur adult theater companies in the area, which is why it draws from so many communities.”

Cast members include residents from as close as Winnetka, Northfield, and Kenilworth and as far away as Arlington Heights, Lake Zurich, and Fox Lake.

Each December, the Village Follies holds no-cut, open auditions for an annual variety show, remaining committed to finding suitable roles for all participants, regardless of experience.

“We look forward to seeing each other again every December,” Chaveriat adds.

Comprised of 30 rapid-fire musical comedy skits lasting roughly three minutes each, Fractured Follies’ Tales opens with an all-cast rendition of the song “Story of My Life,” from Shrek the Musical, and later reimagines the story of Little Red Riding Hood in the skit “Big Bad Little Red.”

The skit “Mission Impandable” presents a team of pandas—under contract to The Three Bears—that breaks into Goldilocks’ home, seeking revenge, while other musical numbers include creatively “fractured” interpretations of Beauty and the Beast, Rumpelstiltskin and Rapunzel.

The show’s quick succession of skits will accelerate this year with the use of a digital backdrop rather than traditional sets, a technique that’s still relatively new to Follies productions.

“We’ll be segueing between scenes on stage,” Leonard says. “It moves quickly.”

And while Village Follies productions have a large and loyal following (Saturday shows frequently sell out), cast members say the atmosphere on opening night is always relaxed, low-key, and highly entertaining.

“As with all Follies productions, we’ll be stretching boundaries and having fun,” Leonard says.

For more information or tickets to The Village Follies’ production of Fractured Follies’ Tales visit villagefollies.com.