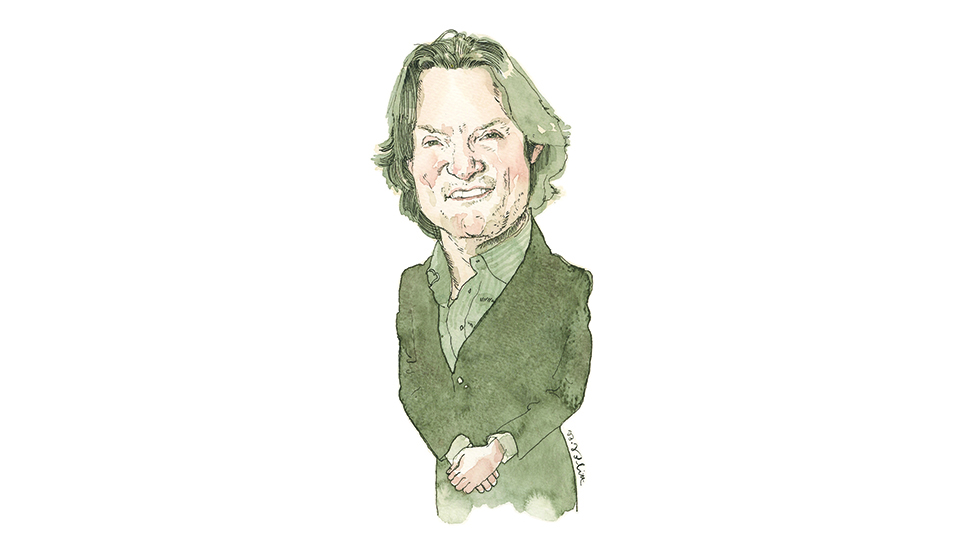 Matthew Broderick was ailing. The actor who portrayed the titular character in the 1986 movie Ferris Bueller’s Day Off was in no shape to perform in a scene, set in Northbrook, that required running—all-out sprinting, in some sequences— across sidewalks and streets and yards and through a neighbor’s house.

A search for a body double began. It ended with the choice of a 20-something Greg Popp, a Glenbrook North High School graduate and a member of the movie’s location management team. Popp had scouted houses for scenes. Popp found that neighbor’s house through which Ferris dashed in The Race Home scene.

Popp and Broderick were the same height and same age. Each had brown hair. But they did not have the same hair length.

“They had to cut my hair,” Popp, now 57 and a Glencoe resident since the early 1990s, recalls in the Starbucks in his hometown on an Antarctic morning, maybe colder. “I put on duplicate clothes for the scene, and when I came out of the trailer, Matthew, dressed in the same clothes I was

wearing, saw me and did a double-take. But I never got to do the scene; Matthew later felt better and did all that running.”

Poor Popp, all dressed up, and shorn, with no place to go.There’s no business like show business. Broderick presented a bottle of Dom Pérignon to Popp after filming and signed the label, “To Greg. All the best. Matthew Broderick, aka Ferris Bueller.” Popp drank the champagne and threwout the bottle, label included.

“Should have kept it,” says a smiling, head-shaking Popp, his mane long again. “I had no idea the movie would turn out to be as successful as it was.”

Popp’s career to date, as a filmmaker who specializes in directing comedy-dialogue commercials? Successful. Highly successful. He has worked with Peyton Manning, Roger Federer, Serena and Venus Williams, Joe Montana, Joe Buck, Owen Wilson and Danica Patrick, among many others who have signed an autograph or 200,000. Joan Rivers and Jay Leno, too. During his 19-year, award-laden career at the advertising agency DDB Chicago, beginning in 1986, Popp worked his way up to senior vice president/executive producer, helping in the creation of clever and memorable television ads for Anheuser-Busch and Frito-Lay and count- less other big-time companies. Remember the Clydesdale kicking the football between the telephone poles in the Budweiser commercial? Of course you do. Remember Manning, in any Papa John’s Pizza ad, making you laugh and think, Now there’s an athlete with serious acting chops?

“Peyton,”Popp says,“is a no-nonsense, very smart man, with a complete understanding of acting and with a sense of humor that’s as dry as you’re ever going to hear. He always asks about the subtext of his role, of his lines, in each commercial. I’ve always enjoyed working with him. I like
to meet privately with celebrities and athletes in a trailer or a dressing room and get to know them, laugh a little with them, before they first appear on set. Gain trust. Trust is big. I’m big on making sure they have that.

“I typically perform the role they have to perform in front of them, usually poorly. That puts them at ease.”

Popp met his future wife, Cathy, in a classroom at Northwestern University. It was an advertising class, assigned seating, Cathy, a junior, sitting right in front of Greg, a senior.

“At that time I had no interest in advertising for a career,” says Popp, who received a Student Academy Award forhis narrative-length film The Lottery Rose while earning a film degree at NU. Greg and Cathy dined at Gino’s East in Chicago on their first date. He discovered Cathy to be honest, devoted, highly intelligent, principled. Instant attraction. His classmate for a semester became his mate for life.

“I had an opportunity, after graduation, to head out to Los Angeles and work in the film industry,” Popp says in between bites of a blueberry muffin. “That [Student Academy Award] certainly helped. All I had to do was sign. But I stayed in the Chicago area because I didn’t want to risk losing Cathy. I became a waiter at a Bennigan’s.

“I was a terrible waiter, the worst waiter.”

Popp then called the Illinois Film Office in Chicago and connected with Billy Higgins, a film location manager. Popp landed work as a location scout/production assistant for the 1986 coming-of-age flick Lucas, directed by David Seltzer and starring Corey Haim, Winona Rider and Charlie Sheen. Rain delayed a scheduled scene one night,forcing Popp to sit and wait in a 1984 blue Camaro with Sheen and Seltzer’s guitar-toting son, who let Popp strum a song in the vehicle. Popp—a drummer in the Glenbrook North marching band that performed at the 1979 Cotton Bowl Classic between a Montana-led Notre Dame squad and the University of Houston—played Led Zeppelin’s “Whole Lotta Love”. Sheen, a football player named Cappie in the film, dug the impromptu entertainment from his shotgun seat.

A Christmas party was the setting for Popp’s introduction to a DDB Chicago copywriter. That led to a job interview at the agency, followed by the start of a stable career. Greg and Cathy have two sons, Zach, 25, and Zane, 22. From 2005-2018, Popp, based in Glencoe, directed commercials for L.A.-based Supply & Demand. He co-produced and directed the 2014 short Last Shot, a dramatic thriller and a finalist at the Oscar-qualifying USA Film Festival. Last year Superlounge, also based in L.A., hired Popp to direct commercials. He holds that position today.

Misericordia used film to help people understand its mission. So did Highwood-based Midwest Young Artists Conservatory. Popp lent his talents to both projects. His wife has served in a leadership role for Misericordia’s Women’s Auxiliary for 15 years. “Professionally I get hired to direct a commercial at a high level,” Popp says. “I’m a hired gun; you can call me that. My forte is to finish the ad on time and within budget. You do that and everybody’s happy, guaranteed. I find the process of creating something to be re- warding, highly satisfying, along with collaborating with people you don’t know and then quickly developing camaraderie. Camaraderie, I’m telling you, helps the process move along, makes the ad stronger, more effective.” Greg Popp has no inten- tion to move. Anywhere.The former North Shore teen loves life as a North Shore adult (with the boundless energy, still, of a teen, of an adventurous … Ferris Bueller). “I didn’t flee to L.A.,” Popp says proudly. “I stuck around, right here in the Midwest. I’m glad I did. It’s still nice to direct famous athletes and celebrities in Miami, in Atlanta, in Denver, in Mexico City. Want to hear something fun? We shot the Wilson commercials featuring Serena and Venus Williams in Miami, around the time we did the Federer ad. I met with each sister, separately. Both are so competitive— and not just in tennis.  Each one asked me with the other nowhere near: ‘What’s my sister’s script like?’”

But it’s time to go, time to head back to the office. It’s a workday.