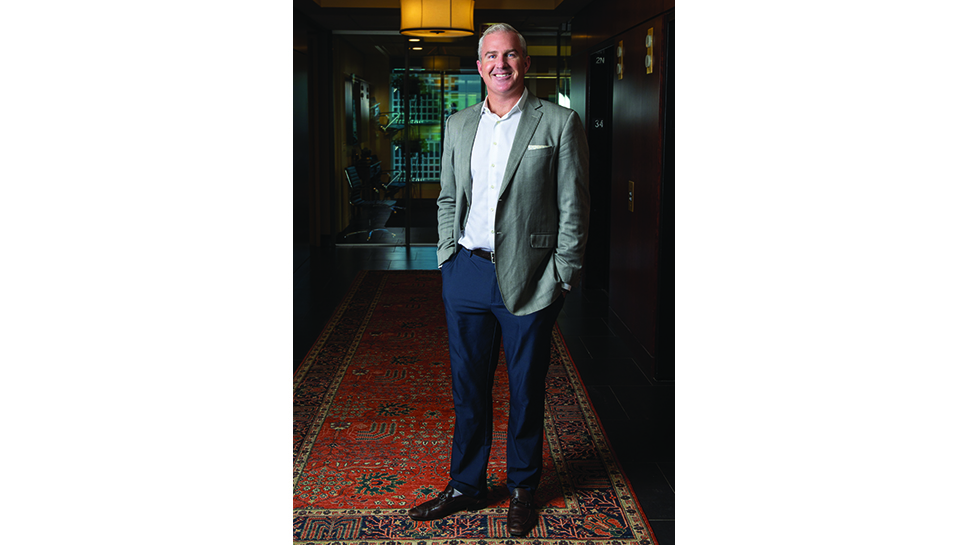 Boys Hope Girls Hope (BHGH) of Illinois Chairman Jamie Baisley stood in a back yard in Evanston not too long ago, observing sheer joy emanating from teenagers and their proud parents.

Along with a happy teardrop or two.

The scene unfolded at a BHGH graduation party.

“Many of the students—scholars, we call them—start as timid, immature freshmen in our program,” says the 44-year-old Baisley, who grew up in Glencoe and graduated from Loyola Academy (Class of ’92) in Wilmette. “But they’re often com- pletely different people as seniors; they’re confident, outgoing, much more mature, excited about the future.

“The parents of the scholars,” he adds, “get emotional at a gathering like that.Their expressions say,‘Wow, this works.’”

This — or BHGH — helps academically capable and motivated children-in-need to meet their full potential and become men and women for others by providing value- centered, family-like homes, opportunities, and education through college. Jesuit priest Fr. Paul G. Sheridan founded the organization in 1977 with a noble-spirited goal in mind: to help children break the cycle of poverty.

BGBH is a privately funded, multi-denominational nonprofit today, operating in 16 U.S. cities and in Guatemala, Brazil, Mexico, and Peru. Children generally enter the program between the ages of 12 and 14, reside in nurturing living quarters, and attend first-rate elementary and secondary schools.

Some 40 scholars are transforming their lives under the guidance of BGBH of Illinois leaders and volunteers in the 2018-19 academic year.

“Our approach is a holistic one,” says Baisley, who served as a BHGH of Illinois board member for 10 years and fulfilled executive committee duties before becoming chairman. “Our scholars are athletes and interested in sciences and the arts and other subjects, and we’re arranging intern- ships and job interviews for them, as well as walking them through the college-application process. We’re also helping them develop life skills. Our organization’s life mentors continue to have a tremendous influence on them.

“Meeting the needs of the whole person—that’s what Boys Hope Girls Hope is all about,” adds the West Loop resident and founder/managing director of Frontage Search Partners, a Chicago-based boutique search firm that provides recruit- ment for clients in a variety of industries.

BHBH of Illinois holds its annual gala — the BHGH Women’s Board Evening of Hope, with a Mardi Gras theme — at Morgan Manufacturing in Chicago on February 23, beginning at 6:30 p.m. Tammy Lundal and Tracie Miller co-chair the women’s board; Leticia Guerra-Shinozaki, Martha Idler and Lori Rago will co-chair the gala.

“I was fortunate, growing up in a family like mine and getting the opportunity to go to Loyola Academy and develop with the help of the school’s wonderful teachers and coaches,” says Baisley, who has four sisters and two brothers and whose parents, Jim and Barbara, live in Wilmette. “After I first got into the recruiting field [in 2004], I became interested in getting involved in philanthropy.”

Baisley offered his time and energy for a Boys & Girls Club before joining the BHGH of Illinois board. Eight years ago he was president of the Loyola Academy Junior Board. Among his many other contributions as a philanthropist was a stint as a committee member for Ann & Robert H. Lurie Children’s Hospital Champions for Children’s.

A safety on Loyola Academy football teams, Baisley played middle linebacker and majored in business at Indiana University, suited up as a captain for the IU Hoosiers and played professionally in the NFL, NFL Europe and XFL leagues. He won a pair of World Bowl championship rings (1998, 2000) with the Dusseldorf, Germany-based Rhein Fire of NFL Europe.

Two of the men who had the most influence on Baisley at Loyola Academy were John O’Loughlin and the late John Hoerster (head varsity football coach). O’Loughlin taught history and was Baisley’s sophomore basketball coach.

Baisley, a small forward and co-captain, hit jumpers and rebounded and hustled for O’Loughlin’s squad in the winter of 1989-90.

“Coach O was quiet, and you never wanted to let him down, just like you’d never want to let your father down,” Baisley says. “He was well-respected by all, a man who instilled important values in me—values like hard work, determination. He had a way with athletes, had that ability to motivate everybody around him.”

Get the feeling that Boys Hope Girls Hope of Illinois scholars are quite familiar with that way?

For more information and to register for the Boys Hope Girls Hope of Illinois Mardi Gras Evening of Hope Gala, visit boyshopegirlshope.org/illinois.