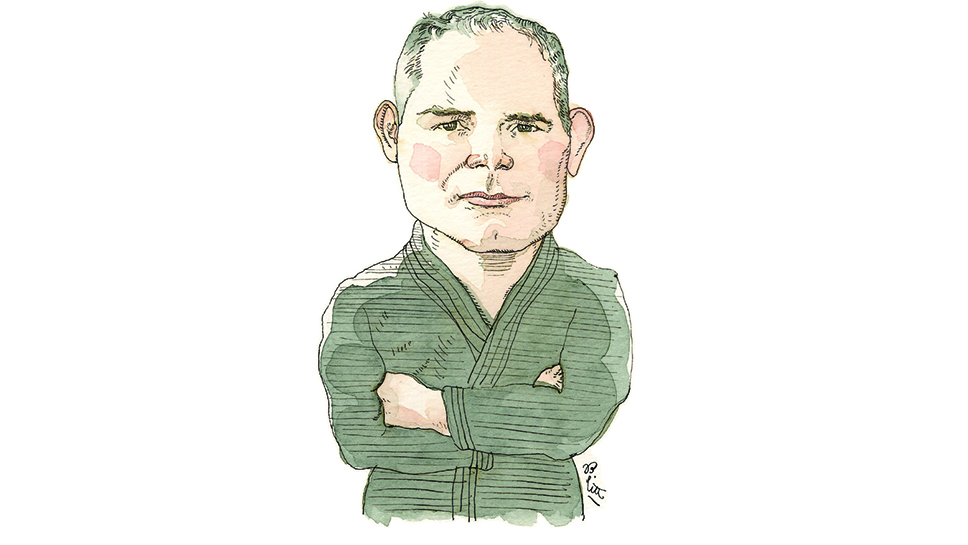 The distance between the Giller home in Wilmette and Fonseca Martial Arts in Wilmette is shorter than a mile. Scott Giller walked it one day with daughter Jillian, his eldest of three with
wife Jenifer, more than two years ago.

Jillian was a karate student at the center.

Scott was a 5-foot-10, 235- pound dad and the managing director of foreign exchange at Fifth Third Bank in Chicago.

“Out of shape, that’s what I was,” Giller, now 46 and in his 14th year with the bank, admits 29 years after his senior season as a 171-pound wrestler and two-way football lineman at Highland Park High School.

Dad did not usher daughter to class and immediately return home that day. He stuck around Fonseca and signed up for a karate class, thanks to a persuasive Jillian. He then received instruction twice a week, on Tuesdays and Thursdays, and sometimes on Saturdays.

Moving.
Mr. Giller was moving around atop a mat again, loving it, kicking and sweating, feeling his
heart p o u n d . Feeling … alive.

“I remember thinking, ‘I can do this,’ ” s a y s Giller, who, in his senior year at HPHS suffered a
b r o k e n ankle in a r e g i o n a l championship bout, an injury that shattered a promising season and lingered and lingered and lingered during his years as a wrestler and political science major at Illinois State University in Normal.

“I also thought, ‘This is good for me; I need this.’ I felt great at Fonseca. I felt a resurgence.”

The 1990 HPHS graduate and former Chicago Mercantile Exchange runner tried Brazilian Jiu- Jitsu—a martial art and combat sport, with an emphasis on ground fighting—next, developing an array of techniques in the sport under the guidance of first degree black belt Jeff Serafin at Serafin Brazilian Jiu-Jitsu in Evanston. Jillian, now 12, joined her father there.

“Doing jiu-jitsu is second to none if you’re looking to get fit, stronger, more flexible, or if weight loss is your goal,” Scott Giller says, adding Jillian often battles 18- and 19-year-olds at Serafin and has already collected bronze, silver and gold medals (in that order) at tour- naments. “Our middle daughter [Rowan, 10] is also into it. Jiu-jitsu is big along the North Shore, getting more and more popular. I’ve noticed my girls are stronger and more confident because of jiu-jitsu. They’re healthy and energetic, and their success in jiu-jitsu is carrying over to their schoolwork.”

His career record in jiu-jitsu, through the end of last month? A brilliant 40-1.

Jenifer grew up in Florida and attended Northwestern University, earning a degree in music education. Scott got his MBA at Roosevelt University in Chicago. He was 33 when he said “I do.”

The Giller family moved from Arlington Heights to Wilmette four years ago. Jenifer played the oboe in college. She plays the cello today. All three of the couple’s daughters, including the youngest (ukuleleist Remy, 6), play an instrument.

His entrance song to a jiu-jitsu bout held in Oak Lawn last year was “Whatever it Takes” by Imagine Dragons. (Scott did not warble the tune; a recording of the former Billboard Hot 100 No. 1 song blared inside the pavilion.)

“Jenifer is super intelligent, passionate about life and caring,” Giller, down to a sturdy 200 pounds, says in between his bites of a Disaster Special omelet (green peppers, tomatoes, onions, mushrooms) at Sarkis Café in Evanston. “A great mom, too, such a great mom.”

Dad Giller, unlike many business folks, doesn’t need a round of golf with a client or two to com- plete a deal. On more than one occasion in the southeastern United States, Giller has trained with a client in a jiu-jitsu session. No armbars barred? (I forgot to ask).

The man who walked one of his daughters to Fonseca Martial Arts in 2016 now trains four days a week at Serafin Brazilian Jiu-Jitsu. From strolling along a sidewalk to executing a technique to sweep a menacing foe off his feet.

“It has changed me for the better, the way it has improved my health, my mindset, my outlook on many things, my treatment of people,” Giller says of his steady relationship with jiu-jitsu. “I feel sharper. But there’s nothing I love to do more than spend time with my family. Nothing in my life is a close second to that.”

Remy is proud of her father’s feats on mats, as are Rowan and Jillian. Remy is too young to begin jiu-jitsu, her father says, though that hasn’t kept her from thinking big thoughts.

“Remy,”Giller says,“wants to win a gold medal in jiu-jitsu someday, just like Jillian, not like her daddy.”

As our breakfast interview nears its end, I inform Giller of the probable run date of “Sunday Breakfast with Scott Giller”.

“It had better be a good article,” says Giller, his eyes narrowing, his face turning dead serious.

“I know jiu-jitsu,” he adds.
He glowers some more.
Seconds later his eyes widen, his face softens. A Giller smile appears.
He laughs.
I laugh.
He had had his fun.
I had my ending.