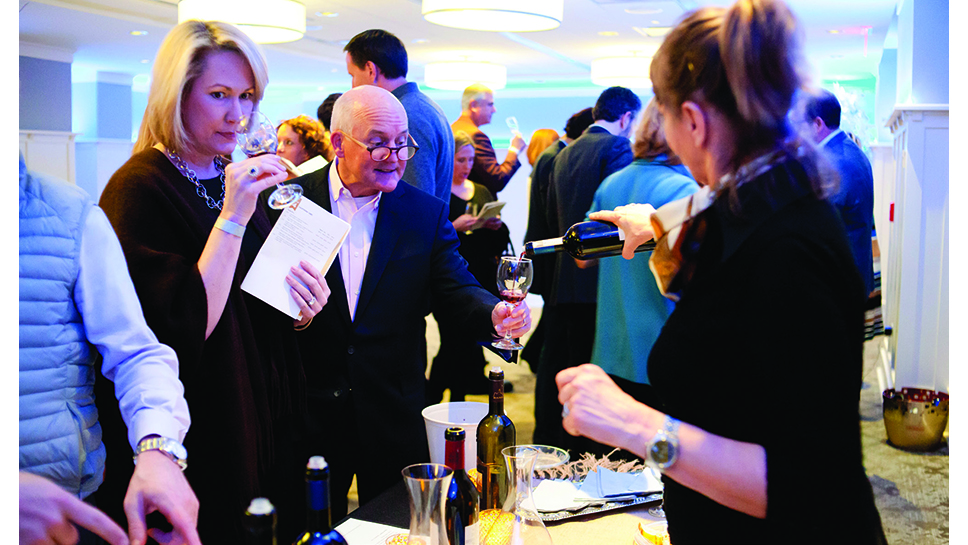 Here’s a fun challenge for North Shore wine aficionados: Think of a vintner-ish question smart enough to challenge a sommelier but crowd-pleasing enough to pique the general public’s interest, and you just might win a prize at the Winnetka Community House’s 10th Annual Wine and Beer Tasting on February 22 from 6:30-9:00 p.m.

“Yes,” Tom Jiaras, owner of the International House of Wine and Cheese in Rich- mond and a longtime partner in the annual tasting, says with a laugh. “Participants who purchase tickets to the Reserve Tasting this year will have the opportunity to attend our ‘Stump the Sommelier’ session, geared to educate attendees about a variety of lesser-known wine topics. For this we will have a

master sommelier leading a Q&A session.
“We thought it would be fun to award the person who asks the question that both has the most substance, and creates the most interest, with a prize.”

In fact, in celebration of the event’s 10th anniversary, the WCH Woman’s Board added several new enhancements to the popular tasting. The Rodney Strong Winery will sponsor a photo booth, and there will be a blind tasting competition—participants taste three unidentified wines and try to guess the grape varietal, region, and vintage. Tasters who answer correctly—or come the closest—will win an impressive bottle of wine for their home cellar.

Another fun segment at the event: J. Vineyards & Winery’s sabrage demonstrations. Sabrage is the ancient ceremonial technique for opening a champagne bottle with a saber. Although it sounds scary, sabrage uses the blunt side of the blade to open the bottles. The blade hits the lip, breaking the glass to separate the collar from the neck of the bottle; the bottle opens fairly easily due to the physics of the container. Sabrage-demo attendees will have the opportunity to buy bottles of J. Vineyard sparkling wines to take home,” Jiaras says.

As in previous years, attendees can choose between two tasting levels to participate in the event.The $125 ($135 at the door) Reserve Tasting gives participants the opportunity to taste and purchase 40 premium wines (bottle prices in the $75-$700 range.) Wines including Penfolds Grange and RWT, Beaulieu Vineyards, Cakebread, Louis Jadot, Hewitt, Ramey Wine Cellars, Chateau de Meursault, Piper-Heidsieck, Lail, and Signorello will be among the offerings.

All wines and beers at the event are available for purchase at 10-20 percent discounts and include delivery, with a percentage of all sales earmarked for the Winnetka Community House.There is also an After Hours Party with a cash bar for tasters who want to stick around past 9 p.m.

In the ten years since the Woman’s Board launched the Wine & Beer Tasting, the event has steadily grown in popularity. The inaugural one drew about 50 attendees and featured 40 wines. Beer was not offered. This year more than 120 wines and 20 beers will be represented, and attendance is expected to top 300 folks.

“The Wine & Beer Tasting is one of three fundraisers presented by the Winnetka Community House Woman’s Board each year,” says Kate Kligora, marketing chair for the WCH Woman’s Board. “Of the three, this has become an event that people really look forward to as a way to brighten the drab winter months.”

“Many people,” Kligora adds, “do not realize that the WCH does not receive any funding from residents’ taxes. Coming to this event, they’ve grown to appreciate both the event and the knowledge that they are keeping a community gem thriving by their participation.”