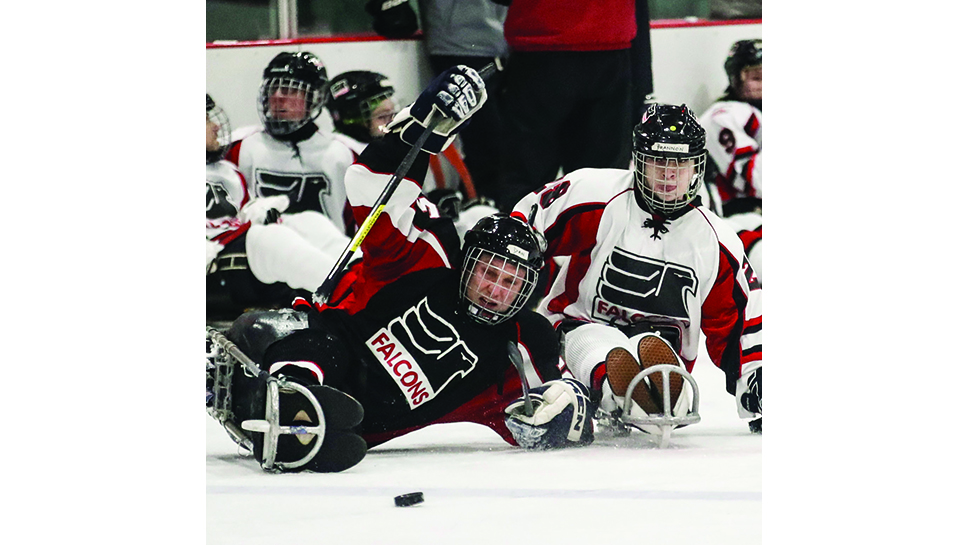 Jacque Rogers rapped a pair of inflatable thundersticks repeatedly against a portion of the glass at one end of Lake Forest College’s ice arena last month.

Many of Rogers’ LFC hockey teammates—also clustered safely behind the action unfolding near a goaltender—accompanied her with identical noisemakers, amping up the volume that the packed, cheering crowd had been providing at “The Sleds Are Coming” event on January 27.

“This is fun; it brings people together, brings communities together,” said Rogers, a Foresters

junior goaltender and a native of Marysville, Michigan.

“GLASA hockey players,” he added, “don’t let anything stop them.”

GLASA, founded by Cindy Housner in 1999, strives to “Let No One Sit on the Sidelines” and operates under a mission to promote and support the optimal development and well-being of youth, adults, and military veterans with a physical or visual disability through the provision of inclusive recreation, fitness and competitive sports activities.

“The support from the fans,definitely,”Kasamis said of what makes “The Sleds Are Coming” a special occasion.“They were great.They were loud.

“I got used to it, how loud it was during the game.”

“Honestly, working with GLASA athletes has been the most rewarding thing I’ve ever done,” Fritz, a Gurnee resident, said shortly after the game at LFC last month.“All these players you saw out here today … normally they play games in front of eight, maybe 10, people. Not today. Not with the tremendous support we got from the campus. Today there were 400 people watching them compete, or close to that number. The kids loved it. The kids loved the cheers, felt the crowd’s energy.

The gathering—sponsored by GLASA and LFC—also featured an appearance by two-time reigning Paralympic champion Brody Roybal, a forward for the United States’ men’s gold-medal sled hockey (“sledge hockey” in other countries) team at the Winter Games in Sochi (2014) and at the Games in PyeongChang (2018).

Roybal is a congenital amputee missing both legs through the hip joint. Born in Melrose Park, he flew across the rink’s surface, making something extraordinarily difficult (players use two small sticks to propel and maneuver the sled) look super easy— all while thrilling the spectators with his dazzling puck-handling skills, or, in hockey parlance, dangles.

“It’s amazing what he can do,” Rogers, giving her noisemakers a brief rest, marveled. “Smooth, so smooth. He set up some unreal plays for his teammates out there.”

Roybal, who signed autographs and posed for pictures with players and attendees, could have struck for a hat trick in no time, but his primary ice-time role was to feed the puck to open team- mates. That he did. Often.

GLASA sled hockey players train hard and diligently year-round. Many typically ramp up their workout sessions as “The Sleds Are Coming” game nears.

“They’re lifting weights, working out,” Fritz said. “All the time. Our trainer works with the players. Some of our players aren’t able to rely on a core to move, so they’re strengthening their arms and their shoulders. You need strength in this sport, arms in particular.”

The event also spotlighted the efforts of the Falcons Hockey Association in 2018. It received the JJ O’Connor Award, which annually recognizes good character, leadership, and sportsman- ship.

Garrett Hahamy, of Glencoe, glided in his fourth “The Sleds Are Coming” contest last month. He had tried soccer and karate before first hitting the ice. “Sled hockey,”Garrett’s father, Ron, said,“is the most fun of the three sports for him.This is always great, watching the kids compete in an ice arena like this and hearing the support for every player.”

It never ceases to impress Fritz, the perseverance of joyful GLASA athletes chasing a puck and working together in a challenging sport. Their tireless, selfless parents, often, serve as constant, vital teammates—at home.

Some of the most effective assists occur miles away from the rink.