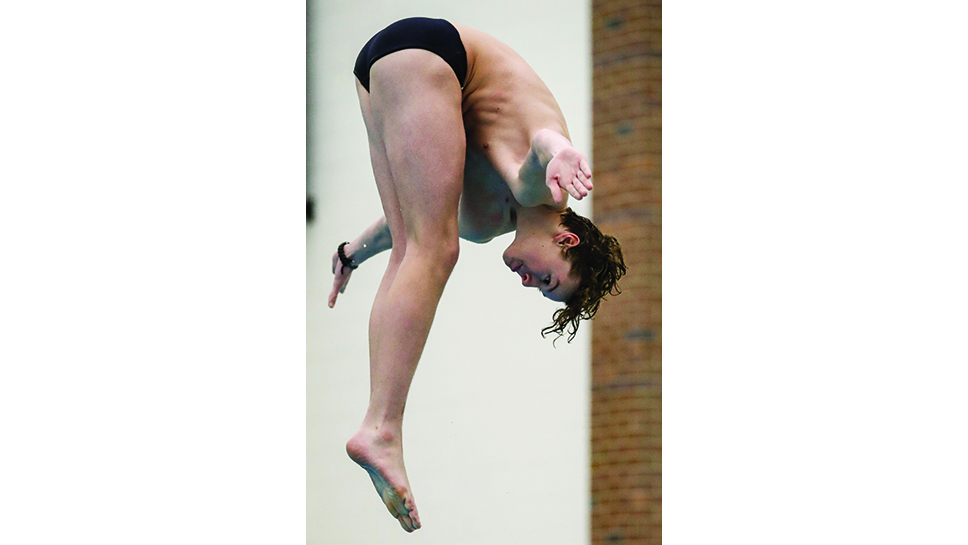 Some of the older guys on New Trier High School’s swimming and diving team call freshman diver John Ervin “Diver”.Or “The Good Freshman” (no relation to The Good Wife, the CBS legal and political drama television series that aired from 2009-16.

What does John Ervin call John Ervin?
“I’m an adrenaline junkie,” he says.
Indeed. The 5-foot-10, 150-pounder likes to climb rocks and whitewater kayak in addition to bouncing high and plummeting—after twisting and turning and som

ersaulting in midair—off boards as the Trevians’ No. 1 diver this winter.

And the former middle school hurdler in track and field plans to compete in the sport’s daredevilish event, pole-vault, this spring.

The young man likes to dance with peril.
Or the least the prospect of it.
“Diving is a thrill for me,” Ervin, a Wilmette resident, admits. “You need perfect focus to dive well; you need to be aware how important the mental side of the sport is. All I hear as I’m getting ready to dive each time is the sprinkler [or surface agitator to help divers in their visual perception of the water surface]. You also need to spot the water in the middle of a dive and kick out at the right time. Risks are involved in diving; I like taking risks. I once [descended] five or six feet, going backward, while kayaking in North Carolina.

“Kind of frightening,” he adds.

But he had recounted the moment with a smile, meaning the rush of excitement was well worth any trace of fear he might have felt inside the narrow boat.

Ervin joined Chicago Dive Club at a young age before opting to train under club coaches at Glenbrook Aquatics (GA) for a season or two. New Trier diving coach Bruce Kimball, a silver medal- ist in diving (10-meter platform) at the 1984 Summer Olympics, recommended GA to a 10-year-old Ervin after having worked with the future Trev at Centennial Pool in Wilmette.

Ervin chose to take a break from competitive diving for a brief stretch. The intense training, the required focus and the time commitment can be tiring at times, tough to maintain.

But Ervin, the high school rookie diver, continues to feel recharged and rejuvenated while representing his school this winter.

“He shot up in height,” says Kimball, standing poolside at Glenbrook South High School during New Trier’s Central Suburban League South dual meet with the Titans January 18. “As soon as I saw him at the beginning of the year and looked at the names on my list of divers, I said, ‘Wow, is that really you, John?’ He’s strong, with good toe point, and he keeps his legs straight. He has a combination of strength and finesse. Balance. He has that, too, along with good competitiveness, and I like that he doesn’t get flustered.

“We added some dives [including a double pike] in practice, difficult dives this week, but he hasn’t competed them in a meet yet.”

Ervin totaled a season-high 215 points for six dives at NT’s first home meet and came close (meet- best 213.9) to matching that last weekend at Glenbrook South—where he had hit the boards as a GA diver.

“We were joking around, having fun with John,” Kimball says.“We pointed out to him that this road meet for us was like a ‘home’ meet for him. He knows these boards and this pool well.”

Ervin had competed in three 11-dive invitational meets through January 19, with two of the tests coming against varsity fields. He placed fourth at the Glenbrook North frosh-soph invite December 15.

As for his days in the classrooms at NTHS, they’re quite challenging.

And nothing like his time in buildings in previous grades.

“Eighth-grade, I could, when necessary, do my homework during passing period,” the gregarious Ervin, flashing another pool-wide smile, says. “Not at New Trier. No way. I’d never be able to get away with that now. I do homework at home for two hours, sometimes three, a night.”

His mother, Molly, put him to work earlier this month at home. The project involved wallpaper. If Molly wants to rearrange a room at home, she usually seeks assistance from John, a geometry whiz.

“My mom has believed, for years, one of my strengths in academics is geometry,” Ervin says. “Maybe I’ll get into carpentry [after college] or into some other kind of trade. I did like building stuff as a kid; I was a Lego kid. I like being active.

Notable: Longtime New Trier boys diving coach Kimball, on his 2018-19 crew: “This is one of the least experienced groups I’ve ever had at New Trier, but the guys, I’m telling you, love diving. All of them do. They have tremendous spirit. If any has, say, a bad landing, he gets right out of the pool and looks forward to going again. It’s been enjoyable for me, working with all of them.” … Ervin, on Kimball: “Talking with him is easy. He encourages us, reminds us to have a good time. I like how he pushes me as a diver, and he does it with safety as a priority.”