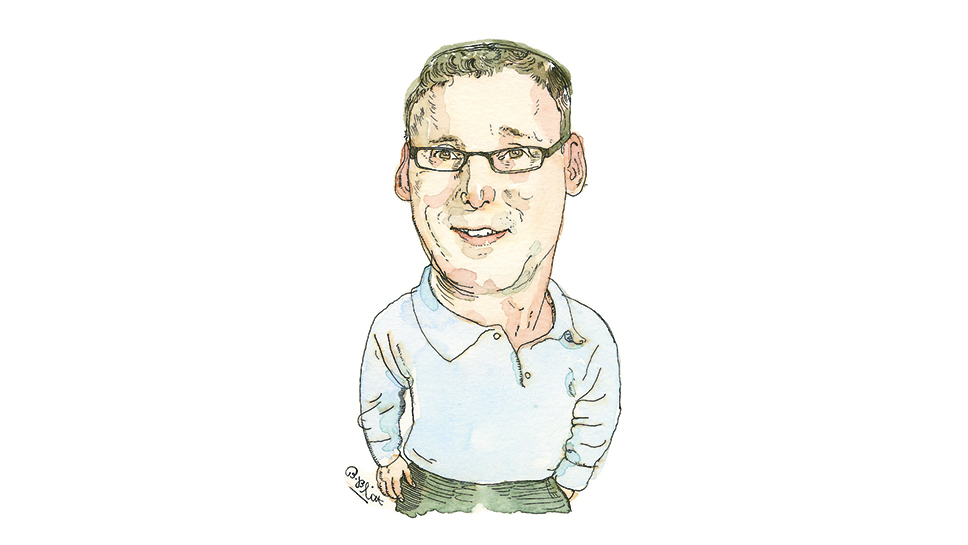 The Schaumburg High School senior gymnast wanted to hit the stage in the late 1970s, not the mats. He aimed to land his first role, not a dismount off the pommel horse.

The athlete auditioned for Play It Again, Sam. He earned a part, portraying the ghost of Humphrey Bogart in a play about a recently divorced film critic who identifies with the movie Casablanca and its character Rick Blaine (Bogart role).

“I was not a confident kid,” Joe Pulio, a 1978 Schaumburg HS graduate, recalls. “I remember being inspired by my younger sister [Laura] while watching her perform in plays in the eighth grade.

Today Laura Pulio-Colbert is a professor of Speech & Theatre at Harper College in Palatine. This winter her big brother is set to direct Big Brother and other characters in the play 1984 at Lake Forest High School.

The theater department was created only two years ago, thanks to the leadership and vision of the school’s principal, Dr. Chala Holland.

“She has been a tremendous supporter of the arts at our school,” says Pulio, a Volo resident. “I’ve seen the positive impact of theater experiences on my students and on my children [Danny, Michael and Emmarose]. Kids change for the better through theater, through any of the arts, really; their confidence level increases.

“For years my message has been, ‘You’re able to develop tools in the arts that will be valuable in other areas in your life.’ And people in the arts feel better about themselves after creating or performing.”

Pulio lifts a spoonful of oatmeal at Egg Harbor Café in Lake Forest and consumes it. Shortly thereafter the teacher in him is front and center. It’s time for him to explain growth mindset vs. fixed mindset. Suddenly I’m a teen in a classroom all over again, eager for a teacher to feed me knowledge. I straighten up, pen at the ready to stain the next sheet of paper.

“Theater,” he begins, “is embedded in growth mindset. People with a growth mindset believe they can learn, develop skills, learn from their mistakes, change after receiving useful feedback.”

I learn that those with that type of outlook are shruggers who think their levels of intelligence and talent are incapable of being developed. Effort, to them, is pointless. They skate through life.

They never think to sharpen their skates.

“It’s rewarding, seeing passion from students who care about discovering and improv- ing—even while they’re out of their comfort zone,” says Pulio, also a force behind the school’s Business Incubator, a junior-level honors course designed to expose students to all aspects of en- trepreneurship. Local business leaders serve the students as mentors/coaches. The course’s “Pitch Night” could pass for the younger sibling of the television series Shark Tank.

“As a teacher with a background in classical theater acting,” he continues, “I want
to be real and honest with each of my students. I want them to know they’re in a learning environment,

a family environment. I thrive when I work with a group, business students or theater enthusiasts, and have the opportunity to motivate them, push them, see them grow. To me it’s all about connecting with kids and fostering creativity.”

Pulio enrolled at Northern Illinois University, thinking he’d double-major in marketing and theater. But the performer in the school’s production of Oklahoma!—as well as a student in “intense dance classes”—ended up majoring in marketing and education.

Pulio taught business and directed shows at Fremd High School in Palatine for two years
before heading to Illinois State University to pursue a Master of Fine Arts. Some theater student named John Mal kovich was also in Normal at the time, killing it for audiences. Pulio left the MFA program after one year and returned to the northern part of the state. He portrayed Drake the butler in Annie at least 100 times at Marriott Theatre in Lincolnshire and at Pheasant Run Resort in St. Charles. In between shows, he worked for Ameritech Corporation as a consultant. The company’s Super School initiative introduced the internet to classrooms in the 1990s. Pulio accompanied 12 students to D.C. for a Super School presentation.

“It was then,” Pulio says, “that I realized how much I had missed teaching.”

Lake Forest High School welcomed him in the mid-1990s as a business teacher, Talent Show liaison and director of plays and musicals.The former gymnast had to become an adept juggler. Pulio later earned master’s degrees in Special Education (Northeastern Illinois University) and in Educational Leadership (Roosevelt University in Schaumburg).

Weightlifting, gardening and landscaping are among his escapes from the classroom and stage. But each takes a back seat—no, a trunk seat—when one of his children takes the stage. Danny, when he was a Wauconda High School student, performed in the school’s jukebox musical All Shook Up, a production that earned an appearance at the prestigious Theatre Festival at Illinois State University.

Emmarose, a freshman at Wauconda, portrayed Jojo in the school musical Seussical last November. “My kids gained a lot and learned a lot, attending rehearsals of plays I directed when they were young,” Pulio says. “Then, to see them grow up and to see their confidence grow, as well, through a performing art … that’s what happened to me.”

“An education in the arts,” he adds, “empowers people. It often leads to success, and I’m not just referring to success in the arts.”

You can say that again, Joe.