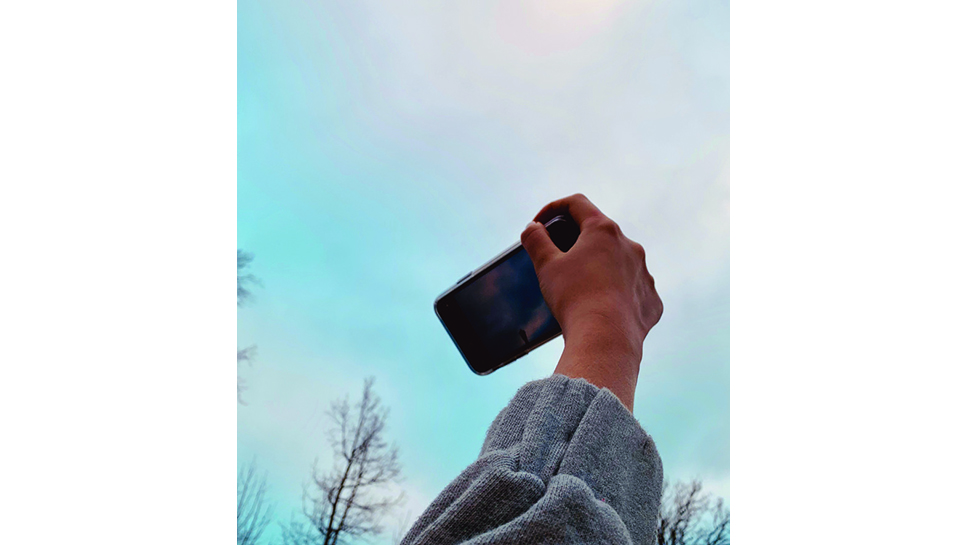 SkyDay project enlists help of people around the world to take photos of the sky.

Nationally renowned Wilmette artist Ben Whitehouse—in concert with the environmental advocacy group Go Green Wilmette—is proving that when it comes to building awareness of the earth’s precious natural resources, the sky’s the limit.

Whitehouse, a painter and video artist best known for his large-scale paintings and 24-hour video projections called Revolutions, is the founder and executive director of Only One Sky, an educational not-for-profit organization. Its mission is to offer young people inspiring citizen-art and citizen-science initiatives on global sustainability, including an annual Sky Day celebration.

Only One Sky’s fete this year takes place on September 20.

Two years ago Whitehouse and a small team of artists, scientists and astronauts launched a bold initiative: an international awareness campaign called the SkyDayProject, inviting citizens around the world to snap photos of the sky and upload them to the SkyDayProject website (www. skydayproject.org), creating an ever-changing online mosaic.

The SkyDayProject online montage has been installed at the Adler Planetarium, the Chicago Botanic Garden and the International Space Station.

“Our shared sky is dynamic and beautiful, perhaps the greatest show on earth,” Whitehouse says. “But it isn’t just beautiful to look at; it’s also beautiful in the way it supports all life and protects us from the harshness of space.”

All over the world, schools, villages and non- profits are galvanizing support for the worldwide SkyDayProject in their communities.

At its home base on the North Shore, the non-profit grassroots environmental organization Go Green Wilmette is hoping local residents will band together to contribute a thousand sky photos to the SkyDayProject before March 10, when the gallery premieres at Go Green Wilmette’s 12th annual Going Green Matters Fair, set for 12-4 p.m. at the Michigan Shores Club in Wilmette.

Founded in 2006, Go Green Wilmette has played a vital role in shaping the Village of Wilmette’s approach to local issues—recycling, cars idling, lawn care and usage of leaf blowers, among others—that impact the environment.

Go Green Wilmette board member and Wilmette resident Saima Abbasi says the photos will be projected onto a large screen at the fair and beamed from flat screen televisions stationed throughout the club, where students will paint sky scenes and write impromptu, sky-themed haikus—or Sky-kus.
“We feature an art exhibition at every Going Green Matters Fair,” Abbasi says. “The goal this year is to remind people that the sky is a shared resource for everyone around the world.”

Abbasi, a native of Pakistan, has come to appreciate the North Shore’s clear skies and clean air.

“There is so much air pollution in places like China, India and Pakistan,” says Abbasi, who recently launched an offshoot environmental organization in her hometown of Lahore, a city in the Pakistani province of Punjab. “Here in Chicago we often take our blue skies for granted.”

The British-born Whitehouse, who has spent the majority of his 35-year career using art to express his deep concern for the environment, has also developed a love for Chicago’s expansive, dynamic vistas.

“Our Chicago sky is incredibly beautiful,” Whitehouse marvels. “Standing on the shore of our great Lake Michigan—you can see incredible expanse and extraordinary changes in light from horizon to overhead.

“You can even see the curvature of the earth,” he adds.

And while Whitehouse knows that taking photos of the sky will not cure the world of air pollution or reverse climate change, he believes an initiative like the SkyDayProject can serve as a non-political, non-divisive portal that allows citizens of the world to talk about climate change on a global scale.

“Climate change doesn’t care who you are or who you vote for,”Whitehouse says.“It is simply a scientific reality, like gravity. How we respond to life in a changing climate is possibly the great- est question of our time.”