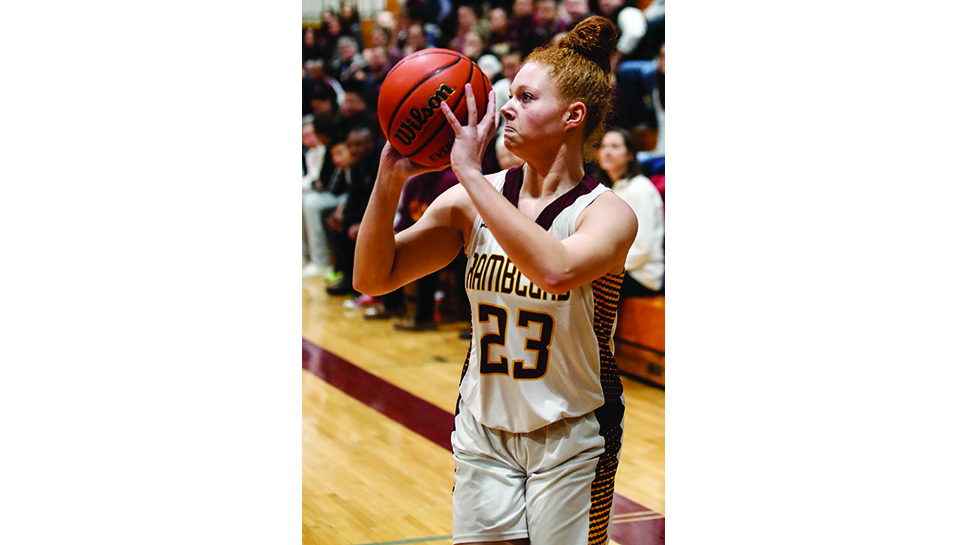 Addison Ebeling fires a shot during the game between Loyola and Marist.
Photo: Joel Lerner/JWCMedia

Addison Ebeling wouldn’t hesitate to pounce on a loose ball at the end of a taut girls basketball game. The Loyola Academy junior guard/forward also wouldn’t pass up any opportunity to embarrass a teammate.

“I’m goofy,” the fun-loving, super-positive Ebeling, a third-year varsity member, admits. “In a hallway at school sometimes, if a teammate is nearby and I happen to see a boy she likes, I’ll yell that boy’s name.

“My teammate then usually screams, ‘Stop it!’ Or, ‘Staahhhhhhhp it!’”

Coincidentally one of Ebeling’s new roles this winter, depending on the matchup, is to stop the other team’s top scorer. Marist’s major offensive threat scored only from the free-throw line in a game in early December. Taft’s force on ‘O’ also struggled when the 5-foot-11 Ebeling guarded her in a 47-35 LA victory December 20.

“We’ve talked,” Ramblers girls basketball coach Jeremy Schoenecker says.“The game is about more than three-point shots. It’s also about finishing around the basket, rebounding, being aggressive, playing tough defense. Addison has been asked to do more for us than she did in her first two seasons. I like what I’ve seen.

“With [standout senior point guard] Julia Martinez being able to find Addison in situations, Addison is relishing and enjoying her new roles.”

Ebeling—averaging about eight points and three reboundspergamefora17-5squadthroughJanuary 10—scored all five of her points in the second quarter of LA’s 49-29 defeat of visiting Lake Zurich High School on January 4. Her trey opened the scoring in the frame, and her two-point field goal stretched the Ramblers’ lead to 24-12 at the 4:25 mark.

The Evanston resident and Haven Middle School graduate also finished with two rebounds and two steals against the Bears, who trailed 28-16 at half- time. She came up big in the paint against many of her friends in LA’s 48-45 defeat of Evanston Town- ship High School on December 21.

“I’m driving more this year, getting more rebounds, and I like the challenges that come with defending a team’s best player,” Ebeling, also a varsity volleyball player, says. “I’m working on my leadership, too, helping the younger players when I can, pointingout to them that you don’t always have be so intense. It’s also OK to have fun out there.

“On the bench,” adds the ALL IN Athletics club player, “I’ll sometimes remind our [reserves], ‘You have to be ready to go in at any moment.’”

The daughter of Holly, an ETHS graduate, and Loyola Academy graduate and LA varsity boys volleyball coach Lionel Ebeling, Addison knows she has to be fully aware, at all times, when she shares the floor with Martinez, a St. Louis University recruit.

Martinez, a thrill-per-second competitor, has uncanny court vision and whips a variety of smart passes.

“I get to play with the greatest point guard in the world,” says Ebeling, a right-side/outside hitter for Loyola Academy’s Class 4A supersectional volleyball team last fall.

Dad Lionel, no question. He served as a vital member of the Ramblers’ 1993 Hall of Fame vol- leyball ball team, which was inducted in 2006. That squad went 33-1, with its lone loss coming in the postseason against eventual state champion Glen- brook North.

“My dad watches more basketball film than I do,” the daughter says. “This morning [ January 4] he told me,‘You need to shoot more.’At home he often watches, with my mom, game film of the game we had just played hours earlier.They’ll watch the game again on a laptop.I’ll hear them.They’ll whistle and cheer while viewing it. They really get into it.

“Basketball,” she adds, “is my favorite sport. It’s more up-and-down running than volleyball is.There’s more energy. My dad likes to joke with me, saying I would have been a better volleyball player if I had committed to it fully at an early age.”

Ebeling played travel volleyball for one of Lionel’s teams in the sixth grade. About halfway through that season, Addison made a decision.

“She ditched me,” a smiling Lionel Ebeling recalls. “She stopped playing volleyball back then in order to focus more on basketball. But I was fine with that. Look, she made the right choice. She loves basket- ball, and she continues to improve as a player.

“It’s fun for me, watching her play basketball and reach another level each season.”