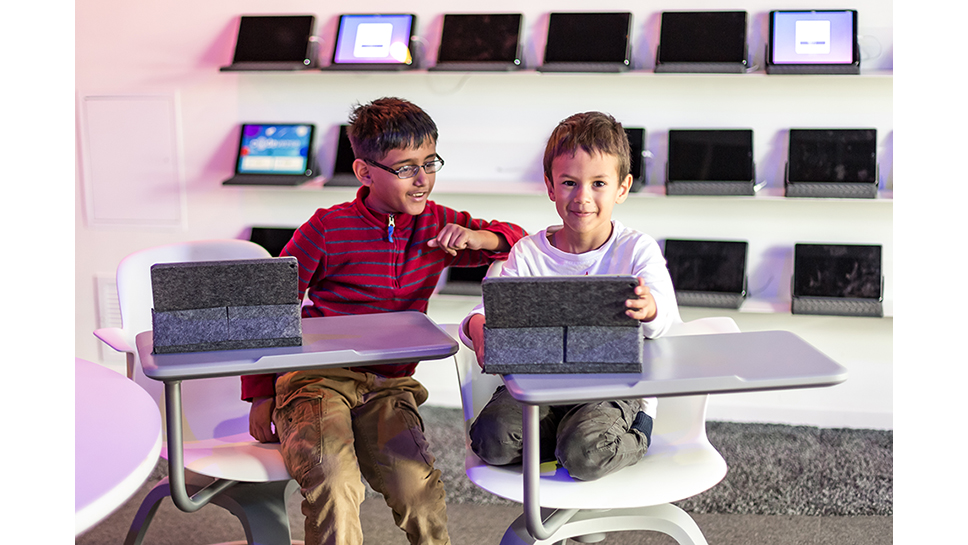 Codeverse opens this weekend in Wilmette.

A spaceship-themed coding studio for kids is set to launch in Wilmette this weekend.

“Everything in the studio is completely interactive,” Codeverse Studio Manager Tia Piraino says ahead of the venture’s January 5 opening. “It looks very futuristic.

“I’m excited about being able to have people finally see the space.”

Codeverse opened its first location in Lincoln Park in 2017, before expanding to Naperville. Code- verse is the world’s first fully interactive coding studio for kids aged 6-13. At the studio they learn a special coding language — KidScript, based on JavaScript — and use it to program hardware like concert hall lights, speakers and robotic arms, or to design their own apps and games.

Codeverse Co-founder and Chief Marketing Officer Katy Lynch says the studio and Wilmette should be an ideal match.

“Wilmette is a very familycentric town, so we believe that we’re a great fit for the area,” she says.

“Seeing the kids’ reactions when they program something for the first time, it’s fascinating,”Lynch says.

And parents can take part in those breakthrough instances, too.

“[The kids] can share anything that they design and develop in the studio with their families,” Lynch explains, adding Codeverse students will likely send their creations — games, for example — to their parents’ cellphones.

Lynch started the company with her husband, Craig Ulliott, in 2016. She worked at Techweek, a website that tracks tech companies outside of Silicon Valley, and he was at Belly, a customer loyalty app for merchants.

“We got the idea while both of us were running completely separate businesses,” Lynch says.

Lynch saw a documentary about the lack of women in STEM (Science, Technology, Engineering and Mathematics), triggering a chat with Craig. They did extensive research, which revealed two realities: an absence of coding language designed for kids and a dearth of interactive studio space.

It took them about a year to develop KidScript.

The Lincoln Park studio opened its doors in July 2017.

Less than two years later, as they prepare to open the Wilmette studio, Lynch says she and Ulliott are drawing on lessons learned from the Lincoln Park and Naperville sites.

Some of Codeverse-Wilmette’s classes are nearly full, Piraino, the studio manger, reports.

She adds that the unique workspace on Green Bay Road will have “a ton”of things going on during opening week, a ribbon-cutting ceremony ( January 7) among them, as well as several open houses.

It won’t be the last studio Codeverse opens.

Lynch says Codeverse has obtained more than $10 million in funding to open franchises beyond the Chicago area.

“We plan to have them across the U.S.,”she says.