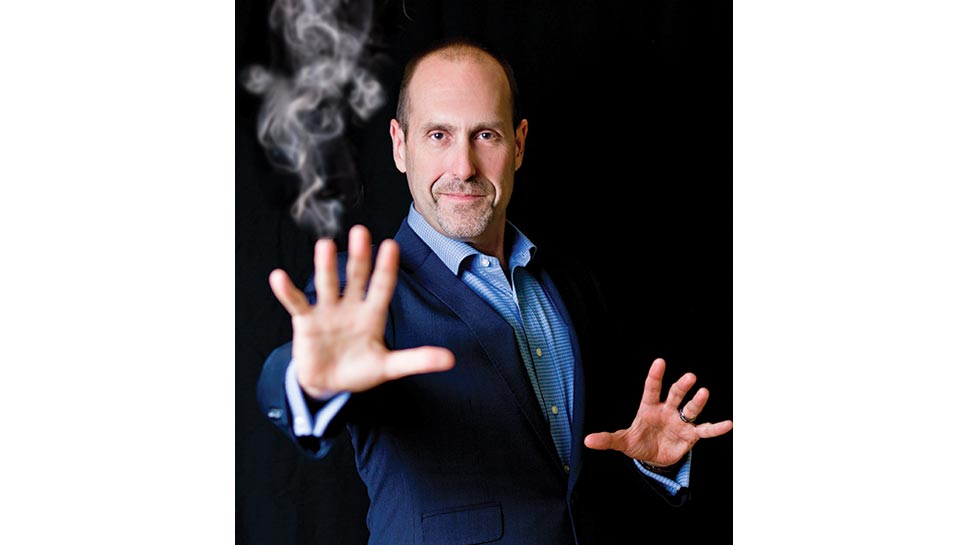 Christopher Carter is coming to Winnetka — and he’s ready to BLOW. YOUR. MIND.

The well-known Chicago-based illusionist, mind reader and mentalist will appear at the Winnetka Community House (WCH) on January 26 as the featured entertainment at WCH’s annual Board of Governors fundraiser.

Using techniques he perfected in a career spanning 28 years (and counting), Carter will engage with audience members throughout the one-hour performance, inexplicably predicting their actions, manipulating their thoughts and reading their minds.

But make no mistake. Carter is not a psychic, clairvoyant or fortune-teller. He does not use ropes or strings or moving floors in his unique brand of magic

“I read people,” Carter says in a phone interview. “Their eyes, their clothes, their mannerisms. I am a skilled observer of human nature.”

Although Carter becomes hesitant when the subject turns to his techniques, he says he always opens his show by interacting with the audience for at least 15 to 20 minutes, using that time to mentally log their observable data.

“It really begins when the show begins,” Carter says. “I put the leg work in early.”

For his grand finale — with a thick blindfold and heavy duct tape covering his eyes — Carter reads the thoughts of random people in the crowd.

And in a time where music, television and movies are increasingly polarized by age, Carter’s “Mentalist” act has widespread, multigenerational appeal.
A popular performer on college campuses and

a sought-after speaker at corporate events, Carter has demonstrated his skills on a variety of daytime talk shows for years.

“There are certain universal languages, and one of them is mystery,” Carter says. “People are fascinated by the temporarily unexplainable.”

“His shoulders would always tighten when he was bluffing,” Carter recalls.

Years later, while working towards a PhD in theater at the University of Michigan, Carter discovered he could combine his love for performing with his keen intuition and powers of percep- tion. Instead of becoming a theater professor, he began working steadily as a mentalist, drawing inspiration from his 19th century predecessors.

“This was a lost art form when I first started,”

Carter says. “I had no mentors. Now, a number of young performers are starting to pick it up again.”

And while the core routines of his performance are set in advance, Carter — like most mentalists

— relies heavily on audience participation. “Because what I do is entirely interactive, each show is unique,” Carter explains. ‘There’s a strong element of improvisation when I perform, so eachaudience effectively creates its own show.”

Tickets to Carter’s WCH appearance on January 26 are selling briskly, with adult general seating priced at $100 and discounted tickets (ages 12-21) at $50. Preferred front-row tickets are set at $125 for audience members eager to be part of the show.

“Proximity helps,” Carter says. “It’s much easier to interact with people when they’re close to the stage.”

The ticket price also includes pre-show cocktails plus light and heavy hors-d’oeuvres in the WCH Garden Room at 6:30 p.m., followed by a post- show dessert and silent auction until 10 p.m. Carter takes the Matz Hall stage at 8 p.m.

All proceeds from the event benefit the program and services of the Winnetka Community House, a non-tax supported, nonprofit founded in 1911 to provide North Shore residents with educa- tional, cultural, social and recreational opportunities.

“This annual event provides direct operating support that helps us keep the lights on, service our constituency and fulfill our mission,” WCH Board of Governors Chair Murray Ancell says.

“But it’s also about bringing the community together to laugh.”