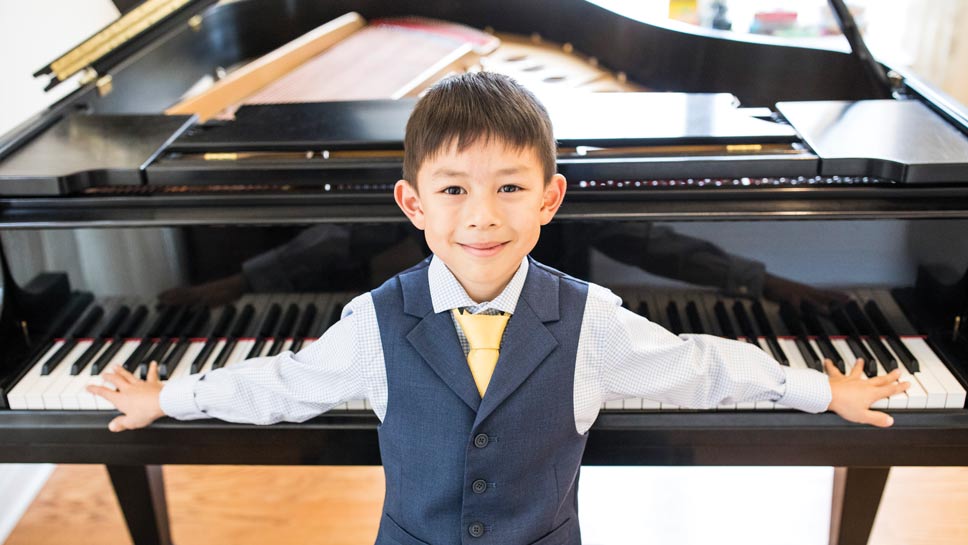 Keys to success? Eric Wang, of Wilmette, knows them. PHOTOGRAPHY BY JOEL LERNER

Eric Wang’s first memory of music was the song “The Wheels on the Bus”. He listened to it when he was learning to speak English. Now a 7-year-old second-grader at Ramona Elementary School in Wilmette, the precocious Wang is rolling — as a pianist. The cabinet in which he keeps the trophies and other honors he had amassed at various competitions is practically at its bursting point.The son of non musicians Kevin and April  took his first piano lesson at the age of 4.

“He was very focused on listening to music,” April recalls.

Eric’s parents received glowing reports from Eric’s piano teacher. Their son had perfect pitch,they were told, and that when he listened to songs,he could figure out the notes and play by ear.Earlier this year Eric won the Carmel KlavierInternational Piano Competition (Concerto division) in Carvel, Indiana. His other recent achievements included third place at the Illinois State Piano Competition by the Illinois State Music Teachers Association and Honorable Mention honors at the 2018 DePaul Concerto Competition. He recently completed his first solo recital at the Thoresen Performance Center in Winnetka, performing a Chinese folk song and works by Mozart, Bartok, Bach and Chopin. Chopin is the young pianist’s favorite composer.

“He wrote pieces that have a lot of emotion,”Eric says.

Eric kept his nervousness in check for most of the recital. While “nervous,” he says, the butterflies disappeared when his opening piece got “a nice reaction” from the estimated 90 friends, familyand teachers in attendance (the family had expected around 30 to show up for the performance at the start of the planning stages).

“So many people were there, I told myself, ‘Just enjoy the music and play well,’ ” he recalls. “But then I thought, ‘I need to do the next piece well, too.’ ”

Eric — a restless pianist in the early going of his music career, because he couldn’t run around— says he has learned to appreciate the piano. He cites Lang Lang, the Chinese pianist whom TheNew York Times once called “the hottest artist on the classical music planet,” as the musician he most admires, mostly for his “charming personality” and the expressiveness with which he plays.Eric practices the piano an hour each day. He also plays tennis, takes swimming lessons and swims competitively. But piano is his favorite activity.

“I don’t know how far he can go,” his mother says. “It will be his decision. Right now, he doesn’tget a lot of homework. As long as he is enjoyingit, we are happy. It’s a good, healthy way to spend his time.”

Eric has an ambition beyond the concert halls and sports venues, and, no surprise, it’s a lofty one. Eric plays with the idea of becoming President of the United States. His platform: “Build more museums and parks that will help kids learn and have fun, and get jobs for adults to make sure nobody is poor or homeless.“I want to make the world a better place.”

Leave it to an accomplished pianist to end his aims in a crescendo.