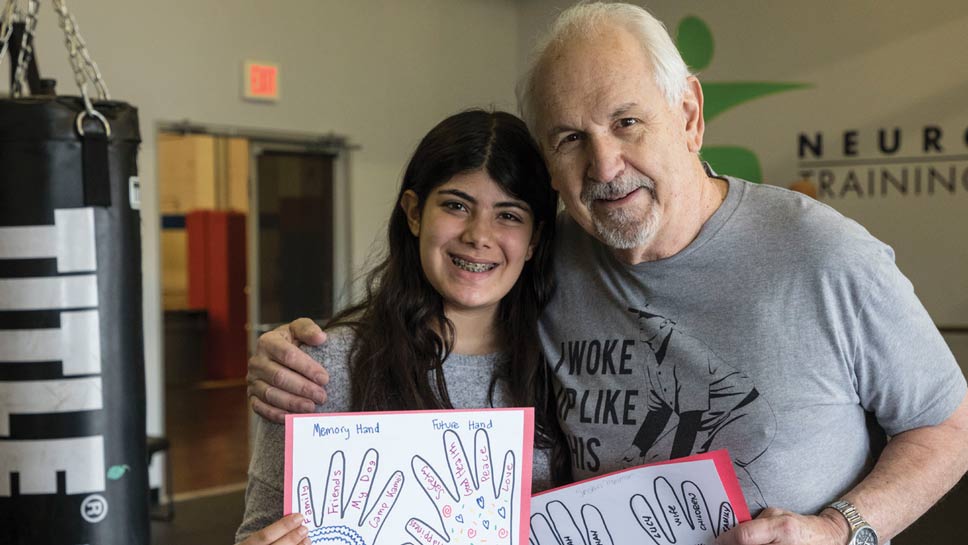 Eighth-grader Lindsey Apple didn’t know much about Parkinson’s disease when she signed up for Sidekicks, a four-week program of workshops that pairs local youths with adults living with Parkinson’s.

Apple, along with some of her friends, was just looking for a way to serve the community. She continues to find the experience an enlightening one.

“They’re a lot like we are, but they express things in different ways,” Apple, a student at Shepard Middle School in Deerfield, says of Parkinson’s sufferers. “Once you get to know them, you realize they’re thinking and feeling the exact same things we are.”

Meaningful artwork — created by Apple, other Sidekicks participants and people with Parkinson’s — will be displayed at a Parkinson’s Sidekicks showcase celebration at Movement Revolution in Deerfield (158 S. Waukegan Road) on November 3. The event, from 10:30-11:30 a.m., culminates the series of workshops.

Northbrook resident Ron Rubin, one of the adult participants, says it’s fun to work on projects with the kids.

“I wanted to see how the kids react,” he says. “I’m just happy to see that these kids want to know what Parkinson’s is all about.”

Rubin adds he enjoys “sitting down at a table with a few of the kids and working with them on the art projects, as well as just conversing with them.”

The workshops have included projects like Ideascapes, in which the participants tried to depict an ideal world, and Storyprints, for which they traced their hands and contemplated their hopes for the future.

“[People with Parkinson’s] are really friendly and nice once you get to know them,” Apple says, adding the projects illuminate how much everyone in the setting has in common.

Each workshop features an educational seminar and an art project. For Movement Revolution owner Eric Johnson, who leads the seminars, each has provided an opportunity to generate more social interaction between adults with Parkinson’s and youth.

“We have a gym setting here, but we recognize that it’s not just all about exercise,” Johnson says. “I thought it was a unique and engaging program for people with Parkinson’s to interact in ways that they normally wouldn’t have. I wasn’t quite sure, before we started, how much interaction there would be. But seeing the relationships that have formed and the developing friendships has been the most rewarding part of it.”

The seminars aim to educate youth about Parkinson’s disease and to erase, or at least chip away at, the stigma associated with the condition. The art projects are designed to foster more conversations between youth and adults.

“It was clear, from the first workshop we did, how much people with Parkinson’s got out of it,” Johnson says. “One, it helped to stimulate their minds. It also gave them opportunities to receive life perspectives from younger people.

“I think it’s therapeutic for them … there’s a social benefit in interacting with children; it puts them in a positive mindset.”

For the youngsters, Johnson adds, it’s healthy to look at life through a different lens. The workshops are supposed to convey the message, among others, that people with Parkinson’s are the same as everybody else is.

“It’s been a great experience,” Apple says. “I highly recommend it. I look forward to doing it again in the future.”