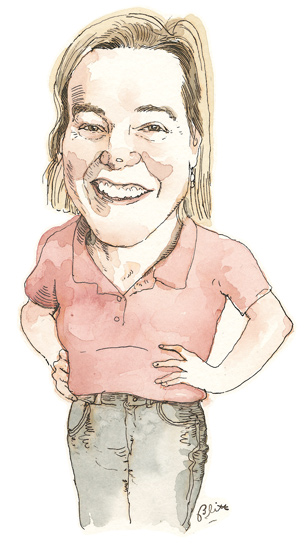 The eight floral arrangements on the Ford family’s kitchen island in Lake Forest make Tom Ford stop on an August morning in 2017. The beauty had stunned Katie Ford’s husband.

“Those are awesome!” Tom says to Katie. “Where did you buy those and how much did they cost?”

“I did them myself,” she says.

Katie had arranged the flowers to brighten the day for eight people in her life.

Tom looks at the explosion of colors in the kitchen again.

Tom’s expression shouts, “You are the real deal.”

Katie Ford sits with me at a table near a window at An Apple a Day Catering & Meg’s Café in Glencoe. She orders coffee, a fruit bowl and whole wheat toast with butter. The 46-year-old mother of four (Ellie, 15, Harry, 13, Maisy, 11, and Buck, 9) cannot believe what her business has become.

It’s her turn to be stunned.

“I never thought I’d do weddings or teach floral arranging classes [at Elawa Farm, in Lake Forest), but I’m doing those things and many other things,” Ford says. “I never dreamed my business would get as big and as busy as it is now. I thought I’d maybe arrange flowers for friends and the occasional dinner party.”

July 2014. Katie Ford’s family vacation on Martha’s Vineyard nears its end. Katie senses a … grayness. The grayness triggers an uneasy feeling. She tells Tom at the airport in Boston, “I’m not feeling right, not feeling like myself.” Days later, in Lake Forest, the grayness lingers.

“It felt like a cloud surrounding me,” Ford, sunshine personified and perennial flower giver, remembers.

But the persistent, distressing companion didn’t stop Ford from loving her family, from working diligently, from deepening her friendships, from skiing and from playing tennis and paddle tennis.

The topic obsessive-compulsive disorder came up later in conversation with a friend. Ford opened up. The friend knew of a public meeting, to be held in Glencoe. The meeting would address mental health issues. Doctors and experts in the field would speak there. Citizens afflicted with mental disorders would speak there.

“You should go,” the friend urged.

The nudge was a gentle one.

Katie Ford went to the meeting.

“My friend assured me everything would be OK,” Ford says. “And she was right. It was a casual setting, and I met a man who had exactly what I had [obsessive-compulsive disorder with intrusive thoughts]. He had made it, survived it, and he was willing to talk about it with me. That was such a relief, hearing him. It was a huge moment for me. It was a turning point. I cried. He gave me his card; we emailed each other.

“His wonderful message to me that day was, ‘You are not alone.’ ”

February 2018. Tom Ford is out of town, and Katie, sitting in bed, eyes her laptop’s keyboard. It’s time — more than three years after the grayness had first entered her life on the East Coast — to type a message, detailing her encounter with mental illness, and share it on social media. Others need to know they aren’t alone. Tonight, not tomorrow.

“I was terrified, at first, about going public with my illness, but I did it because I knew the platform I chose to use would reach many people,” Ford says. “My goal, by telling my story, was to help others realize they had no reason to feel ashamed about what they’re enduring, about what they’re thinking. Keeping open dialogue going about mental health issues is the only way to break the barriers and the stigmas that go along with it.”

One month later at the Lake Bluff Park District Recreation Center, Ford spoke as a panelist, alongside three others, about mental health issues.

“I am managing it, and I have it under control,” Ford says. “My greatest gift? Fighting this thing. But I could not have reached this point without the incredible support I’ve received from my husband, my family, my friends and people, so many people — people who had either heard me speak or read my post and then genuinely want to know how I’m doing when they see me. So much good has come from this, so much positivity.

“What really excites me is being able to have coffee with someone who is dealing with a mental health issue and then informing that person of the resources available.”

“I was known as the happy kid at school, as the dork — with a capital ‘D’ — because I always liked to be with my parents,” Ford says. “You know what? I liked to be around my parents as much as possible because they were my best friends.”

Ford swam for two seasons at Skidmore College in Saratoga Springs, New York, before earning a degree in elementary education at Wake Forest University and a master’s degree in learning disabilities education at Northwestern University. She had spent three years in Wyoming before going for her master’s. Among her occupations in The Equality State were nanny, swim instructor, health club lifeguard/pool manager, ski corps member and personal assistant ranch hand.

“I was a cowgirl for a while,” she says with a slight drawl. “Skiing was my favorite sport then, and it still is today. Mountains are my church. I love Jackson Hole. I love the Canadian Rockies.

“Even seeing mountains in a picture fills my soul.”

The cowgirl eventually shed the boots and the fringe jacket to become a big city girl. Ford’s first job in Chicago was administrative assistant at a financial firm. She later worked for the Golden Apple Foundation as coordinator of its Golden Apple Teacher Education (GATE) Program, an alternative teacher certification program, in partnership with Chicago Public Schools.

“I introduced myself to him,” she says.

A walk, from the Loop to her home.

The journey for folks with mental illness today continues to be a challenging one for many. But it’s gradually getting smoother, more navigable, thanks in part to brave survivors and thrivers and their willingness to speak. And to listen. And to guide.

Would you like to talk with Katie Ford about flowers, about mental health issues, about anything? Feel free to contact her at [email protected].