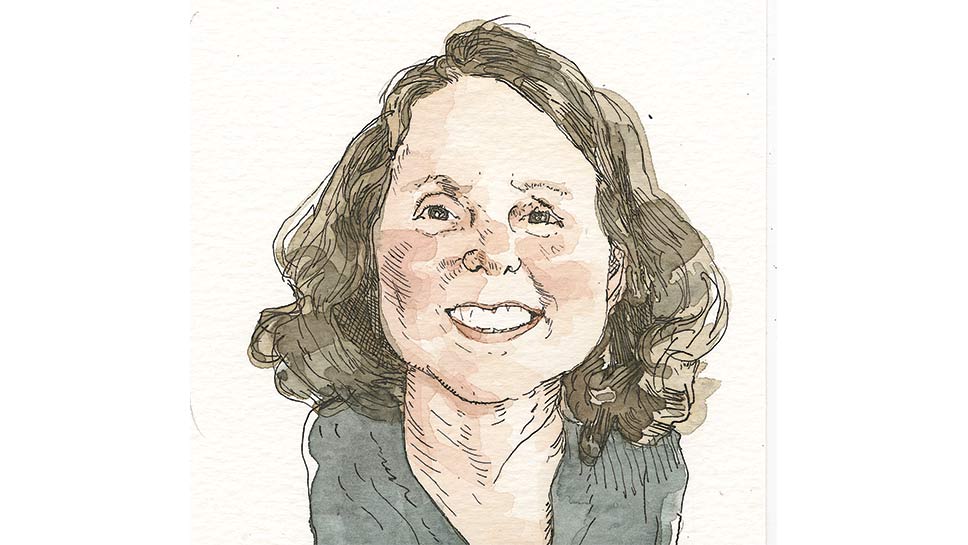 Marcia Cleveland’s parents, Bob and Carolyn, had a watertight reason for teaching a nearly 2-year-old Marcia how to swim.

They got tired of retrieving their curious, fearless tot at the bottom of pools.

It’s never a good thing to impersonate a rock in a body of water.

“Swimming is a life skill,” Cleveland, now 54, says from her seat at Café Buongiorno in her hometown of Winnetka. “Did you know only 52 percent of Americans know how to swim?”

Only four American women have ever swum across the North Channel — 21 miles, between Ireland and Scotland — and one of them awaits her order of iced tea, two poached eggs, rye toast and a side of tomatoes at Café Buongiorno. To prepare for the daunting journey she swam between 30,000-40,000 yards (17-23 miles) per week for nine months.

Cleveland accomplished the grueling feat in 15 hours and 3 minutes on July 21, in 53-54-degree water. The tentacles of jellyfish with umbrella-shaped bells the size of garbage-can lids brushed her often. She doesn’t remember stretches during the last several hours of the swim because she was hypothermic but still conscious. She couldn’t swim faster than 1 mile per hour during the final hours.

A crew member, Lee Harkleroad, aboard the accompanying boat, would later note, “It was truly painful to watch the contortions on Marcia’s face and her lifeless eyes.”

“Hardest thing I’ve ever done, physically and mentally,” says Cleveland, a mother of two (Julia and Samuel) who, while two months pregnant in 1997, swam 12 miles in 4 hours and 43 minutes in an open water race near Key West, Florida, and finished in fifth place among women in the event. “It took everything I had. They say swimming the English Channel [Cleveland did that, in 1994] is the open water equivalent of climbing Mount Everest. Well, swimming the North Channel is harder, probably as hard as the north-face assent of K2 in the winter. I usually breathe every three strokes. I thought about my children and husband throughout the swim, so I’d chant, ‘Mark, Julia, Sam’ [during her pre-breathe segments].

“And every time I saw a jellyfish, and I must have seen thousands of them, I’d say, ‘Peace be with you,’ to each because that calmed me down. I didn’t want to generate any negativity at any point of the swim.”

Cleveland found success in chlorinated water early. Shortly after learning how to swim from her parents, she won races against other 3-year-olds.

Handily. More than once, when she was as couple of feet from the finishing wall, a treading Cleveland would wait for the rest of the field to catch up to her — before gliding to touch the wall first.

“I did that because it was a nice thing to do,” recalls Cleveland, an All-American swimmer (1980-82) at Greenwich High School in Connecticut before racing for four varsity women’s teams at Yale University.

Cleveland was a media buyer/planner for an advertising firm in New York when she noticed a sign announcing a Masters Swimming meeting in a YMCA. She attended it. She learned all about open water swimming. It wasn’t long before she completed her first major marathon swim — around Manhattan Island, in 1990, as a relay member. In 1990 (mixed division) and ’93 (women’s) she and her mates established relay world records in the 28.5-mile test.

It was raining — yes, more water — when she was outside and didn’t have an umbrella during a break at work one day. But a Mark Green, a media researcher in the same advertising firm, did. A courtship began.

“Before we got married [in 1990],” Cleveland says, “I made Mark take a premarital swim test in my grandparents’ pool in Palm Beach. I made him swim all of the strokes of swimming [freestyle, backstroke, butterfly, breaststroke]. He passed.”

Cleveland — a swim instructor at Five Seasons Family Sports Club in Northbrook and the director of swimming at Vision Quest Coaching in Highland Park — swam solo across the English Channel in 1994 and wrote about it in her book, Dover Solo: Swimming the English Channel (1999). In late 2016 she achieved one of the most prestigious distinctions in open water swimming: the Triple Crown. She held the best combined times in the English Channel, Manhattan Island and Catalina Channel swims.

Three short weeks after finishing first at the 17-mile Swim Across the Long Island Sound (which doubled as a fundraiser for cancer in 2011), Cleveland completed the 21.4-mile Lake Tahoe Length Swim.

“I’m not a superhero or some amazing physical specimen,” Cleveland, a recipient of many International Swimming Hall of Fame certificates of recognition, writes in her “Swimming the North Channel” entry on her website, doversolo.com. “But I knew that if I had the energy to stop and complain or beg for an explanation of why we weren’t getting closer to the land during the swim, it would be wasted time, time that could be spent getting to land.

“We weren’t getting any closer because I wasn’t swimming faster at a time when the tide was pushing me in a north-south direction down the coast, when what I was trying to do was swim though it in an eastern direction.”

Harkleroad, the crew member, swam alongside Cleveland for about 10 minutes at the end of Cleveland’s North Channel swim — before Cleveland even realized his presence.

“I don’t doubt this,” she writes. “Whatever he was telling me, I wasn’t processing. The only thing I remember was the beach before us, to finish where there is no water in front of me. He says he was telling me, ‘Stand up!’ because we were in waist-deep water; his words didn’t register at all. Finally, I hit the beach and clawed my way up the shore.”

Why does she do this?

She must answer the question often.

She loves to push herself.

“And I like to inspire others to do things,” Cleveland says.

Our conversation fast-forwards to a time Cleveland sees herself in a nursing home. She is in a room, with a caregiver nearby.

“Oh, I’ll still be swimming then, and I’m sure I’ll be driving everyone at the nursing home crazy,” Cleveland insists. “I can hear myself saying, “Hey, I need a new bathing suit. Need new goggles, too.”