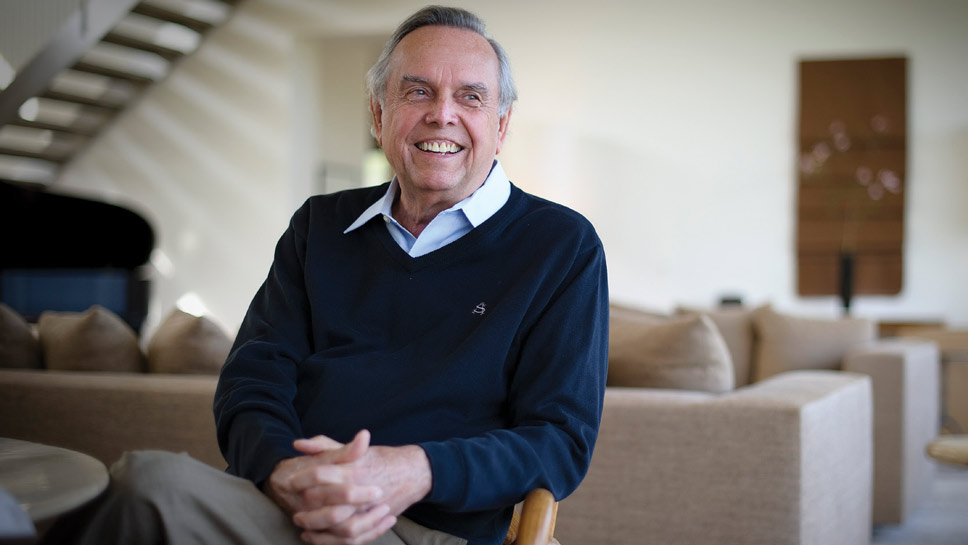 In Chicago and throughout the country, former Sara Lee Corporation CEO John H. Bryan Jr. is being remembered for an enduring legacy as a philanthropist and patron to the arts. The 81-yearold resident of Crab Tree Farm in Lake Bluff —who died on October 1, four days before his 82nd birthday — is credited for raising the millions of dollars needed to make Millennium Park a reality and for his role in saving a Ludwig Mies van der Rohe landmark. He also spearheaded the fundraising initiative to add The Modern Wing at The Art Institute of Chicago.

British sculptor Anish Kapoor, famously known as the man behind the downtown park’s famous $23 million sculpture, “The Bean,” praised Mr. Bryan in the Chicago Sun-Times as “a true and great Chicagoan.” But here on the North Shore, the former Kenilworth resident (where he lived for a decade before moving to Crab Tree Farm) was our friend and neighbor — touching our communities in ways both great and small.

“Locally, he preserved and restored the farm elements and east side David Adler compound at Crab Tree Farm, and the artisans he patronized help restore and preserve many other places in the New Classicist estate house restoration and revival of the 1990s to the present,” says Arthur Miller, former president of Lake Forest Preservation Foundation and emeritus archivist at Lake Forest College.

That restoration work earned Mr. Bryan and his wife of 60 years, Neville, the National Trust for Historic Preservation’s 2014 Louise du Pont Crowninshield Award — the national preservation movement’s highest accolade. On a local level, he received the Lake Forest-Lake Bluff Historical Society’s Local Legends award in 2012, where like other recipients, he was interviewed by Bill Kurtis.

“His most notable triumph — Millennium Park — led to a revival of residential life in the central city core from Grant Park spreading north to the Chicago River Walk extending east and west. He primed the pump,” says Miller, adding that while Mr. Bryan’s work at Crab Tree Farm is well known in the preservation community, his other local endeavors were done quietly and without fanfare.

“He rescued, relocated, studied and restored the 1837 log house formerly at Mills Court, in 2005, now at the Farm. He lent Arts & Crafts furniture to Ragdale after its restoration (circa 2012). He welcomed local organizations alongside international ones to visit Crab Tree Farm — the Historical Society (recently renamed History Center of Lake Forest and Lake Bluff) and the Lake Forest Preservation Foundation,” Miller continues. “When I think of his legacy, I remember a book by a longago summer resident of Lake Forest, novelist Ernest Poole, who in 1943 published Giants Gone, a collection of biographical vignettes of earlier Chicagoans — [William] Ogden, Jane Addams and Daniel H. Burnham. Most certainly an update in the 21st century would include John Bryan.”

Mr. Bryan, who died at Rush University Medical Center in Chicago last week after complications from lung cancer, was interviewed by this newspaper in 2012, just prior to receiving his Local Legend distinction.

He spoke at length to our reporter about how his childhood in Mississippi helped shape the man he would become. Growing up as a sixth-generation Southerner (his great-grandfather was killed in the siege of Vicksburg), Mr. Bryan lived next to his family’s Bryan Brothers Packing Company in West Point, Mississippi, which featured a slaughterhouse. After graduating from Rhodes College in Memphis, he returned to help run the business, which was becoming a major force in the South during the 1960s.

At that time, segregation and Jim Crow laws still ruled. Bryan took moves to integrate his family company – from rest rooms to water fountains. However, the local school board shut down the black school rather than integrate it. Bryan raised funds to build a new black swimming pool and fought the school board. Once the black school reopened, Bryan stunned the town by sending his own children there.

“I had to make choices and become a civil rights advocate,” said Mr. Bryan, who left Mississippi to take charge of Consolidated Foods Corporation, eventually turning it into Sara Lee (which he built into a $20 billion empire that included Hanes Corporation, Coach, Playtex and Hillshire Farm). “I was reasonably protected from retaliation because of our position in town, but I also had some deep convictions.”

Those convictions led to a life of advocacy and philanthropy that touched a variety of organizations and causes. Long before Millennium Park, Mr. Bryan helped raise $100 million from 33 corporations to refurbish both the Lyric Opera building and Orchestra Hall in Chicago. He also chaired the centennial anniversary of United Way in 1984, bringing in another $100 million.

He was also an art lover, in the truest sense.

Though no major art museums existed within 100 miles of where Mr. Bryan grew up, he told our reporter that a lifelong “interest in the visual” propelled him to become a passionate collector of American, French and British art. Marrying his love of art with philanthropy, Bryan helped give away the Sara Lee art collection before he retired. More than 50 works, from Monet to Pissarro, were given to museums around the world – the largest corporate donation of the arts in U.S. history. Even Crab Tree Farm has its own museum filled with arts and crafts by American, English and European designers.

At the time Mr. Bryan was interviewed by The North Shore Weekend, he was happily retired and enjoying life at his bucolic Crab Tree Farm. He spoke of writing a book about the history of the property and working in the gardens with his children and grandchildren. He reflected on a life well-lived, with humility and appreciation.

A memorial service will be held on Saturday, November 3 at 2 p.m at the Art Institute of Chicago, Rubloff Auditorium, followed by a reception at the Pritzker Pavilion in Millennium Park. Gifts to the Art Institute in his memory are requested in lieu of flowers.