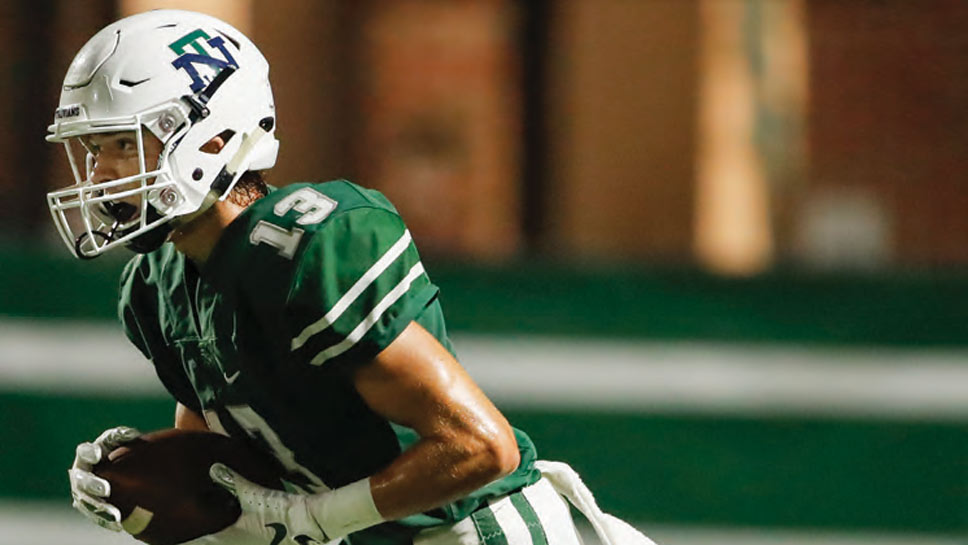 PICK ’EM: New Trier senior cornerback/wideout Carson Kosanovich, seen here in earlier action against Loyola Academy, came down with two interceptions in a 35-28 defeat of visiting Evanston last weekend. He returned one of the picks for a touchdown. PHOTOGRAPHY BY JOEL LERNER

Before most snaps, on both sides of the ball, Kosanovich reaches behind his 6-foot, 185-pound frame to dab the towel with his fingers.

“I want everything to be perfect,” he said after a game last weekend.

Ideal — if you’re a defensive back looking to make a sustained impact against a rival in a big game. Kosanovich picked off two passes, including a 25-yard interception return for touchdown on the Wildkits’ second series in the first quarter. He also snared a pass from Evanston senior quarterback Ben Tarpey on a two-point conversion attempt in the final minute of the first quarter.

The second-year varsity Trevian was quiet offensively, but he still ranks highly among teammates in receptions, receiving yardage and TD receptions for a 5-1 team, 2-0 in the Central Suburban League South.

“People don’t realize how fast Carson is,” the coach added. “But he’s fast, believe me.”

Kosanovich’s pick-6 opened the scoring in the showdown of 4-1 teams, and senior kicker Graham Dable made it 7-0 with the first of his five extra points.

Kosanovich had entered the game with two career varsity interceptions.

“Just made my drop and looked at the quarterback [for clues],” Kosanovich said of his first INT last weekend in Northfield. “Our defensive backs, we’re talking, constantly talking. Coach Doll preaches that. What was great about [the first pick] was the noise our sideline [of players] made as I ran with the ball. Great energy. I was happy to score there and give the team a spark, some life.”

He gave the visitors a reason to feel angst with his second INT. Kosanovich’s athletic, sliding pick gave NT the ball at Evanston’s 32-yard line as time expired in the first quarter.

Four plays later, Trevians senior quarterback Carson Ochsenhirt (6-of-8 passing for 126 yards; 41 yards rushing) ran for an eight-yard TD to up the hosts’ lead to 20-6 at 9:52 of the second quarter. NT would enjoy another comfortable advantage, 28-12 at the start of the fourth frame, but Evanston (4-2, 0-2) hung around, hung around. The Wildkits tallied two TDs and went 2-for-2 in two-point conversions in the final 8:31.

Evanston scored the final TD of the night with 3:29 left in regulation but couldn’t force a punt or a turnover from there. The key play on NT’s final possession was Ochsenhirt’s 31-yard completion to junior wideout Sean McNeely. A New Trier penalty lopped 20 yards off that reception, but three straight Ochsenhirt rushes ate up the final 1:14.

“A little nervous before the start of the game,” admitted Kosanovich, a free safety in the fifth grade before becoming a cornerback three years later. “[State-ranked] Evanston had clout. It was also a team that came in with confidence.”

The new hue was Doll’s idea.

“I’d been thinking about an alternate jersey for our program for a while,” Doll, a New Trier graduate, said, adding the decision to go with navy was a nod to New Trier’s history. (When New Trier West and New Trier East high schools existed before the merger in 1982, West sports teams wore navy-colored togs.) I have to thank our athletic director (Augie Fontanetta) and others in the department for making it happen. The jerseys look good, don’t you think?”

Doll’s players found out they would wear the new tops for the Evanston game after practice on September 24. The big reveal occurred when NT’s football coaches took off their sweatshirts in front of their gridders. Each was wearing a new navy football jersey underneath the sweatshirts.

“I like the look,” said Kosanovich, who, after his two-interception game, made DBs everywhere green with envy.

Notable: New Trier’s biggest scoring play in the first half of its 35-28 defeat of Evanston last weekend was senior running back Brian Sitzer’s 72-yard TD catch-and-run in the second quarter. Sitzer collected a sideline toss from quarterback Carson Ochsenhirt, stopped abruptly, cut toward the middle of the field and raced for more than 50 yards to give NT a 13-6 advantage. His second TD of the night, a 14-yard run, stretched NT’s lead to 34-20 in the fourth quarter. … Trevians sophomore lineman David Davidkov deflected two passes in the first quarter and teamed with senior linebacker Peter Baumruck for a tackle for loss. … New Trier junior linebacker James Hemmer had a pair of tackles for loss. … Trevians senior tight end/defensive lineman Duke Ogles was his disruptive self again on defense and came down with a big 28-yard reception on a third-and-13, tackle-eligible play in the fourth quarter. … Trevians senior running back/defensive back Donovan Perkins gained 52 of his 80 rushing yards on a TD that opened the scoring in the fourth quarter. … Ochsenhirt shouted words of praise for lead blocker Chamberlain Coffee, a senior lineman, as the two trotted off the field following Ochsenhirt’s eight-yard TD run in the second quarter. … New Trier visits Niles North (1-5, 0-2) October 5 at 7 p.m.