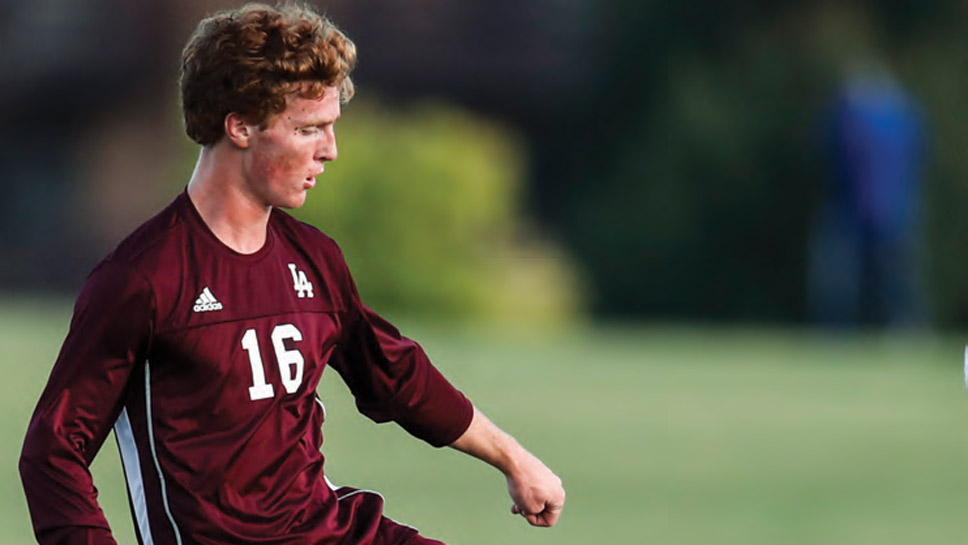 Collin Leider was 12 years old when he first attempted to bake at home. He made cheesecake on that day.

It didn’t turn out very well.

“I took one bite and threw the rest of it out.”

And, yes, his talent in the kitchen is catching up to the talent he displays consistently on soccer pitches.

Check out his passes, particularly his crosses.

The delicious fare he makes in between the Ramblers’ matches these days? His go-to meal?

If you’re looking for a soccer player who owns the necessary ingredients of a complete player, Collin Leider — a Class 3A all-sectional player last fall — is that player. He has intensity, skills, speed, savvy, tirelessness and a ravenous will to win.

“I hate to lose,” Leider admits. “I’m competitive, in everything. I have drive. Sometimes, after a tough loss, I have a hard time letting go. It stays with me too long. That desire can be a good thing, and it can be unhealthy.

“Our coach [Baer Fisher] tells us to have a short memory after loss. I’m working on that.”

He and his Ramblers had lost only once — 3-2 to Waukegan, way back on August 30, in a Northside College Showcase contest — through 15 matches. LA’s 3-0 defeat of visiting Rockton Hononegah improved its record to 11-1-3 on September 9, two days after its 5-0 rout of visiting Brother Rice at the Munz Athletics Complex in Glenview.

“Collin is relentless,” Fisher says of the FC United club player. “He works so hard, brings so much energy. Industrious; that’s the word I’m looking for that best describes him. And he’s a winner. His competitiveness makes our team better.

“He is, in a way,” the coach adds, “an unsung hero for us. He doesn’t score a ton of goals. But he creates, gets his teammates involved, does the little things you need from players on a successful team.”

The middle sibling in a family with five children, Leider — the son of Colleen and Gerard, a 1990 Loyola Academy graduate — loves to battle in pickup games with younger brother Ryan, a freshman who plays for LA’s sophomore soccer team.

Their one-on-one Nerf hoops clashes in the Leider basement have steadily been nearing UFC ferocity.

A pay-per-view deal is just around the octagon.

“We go to town down there,” Leider says, as another grin surfaces. “Physical, it gets quite physical, with elbows flying, bruises forming. But we love it, love going at it.

“We both love to compete.”

The Ramblers’ varsity soccer squad loves what Fisher opted to do with the right-footed Leider several weeks ago. The coach shifted Leider from left wing to right wing. He had three goals before the move and five goals since, to go with three assists since the start of the season.

“Collin’s experience, definitely, is one of his strengths,” says LA sophomore midfielder Tommy Zipprich, an Evanston resident. “He’s a big part of our team, with the way he brings us together and always serves as a good outlet. He’s fast and aggressive and a very good passer. He goes all out, doesn’t like to take his foot off the gas.

“Collin,” he adds, “runs until his face is purple.”

“I’d let him bake or cook something for me,” Fisher says. “Collin is mature beyond his years. Here he is, a 17-year-old, baking and cooking. Very, very mature, and he eats healthy food. You know what Collin is? He’s the ‘grandfather’ of our team.”