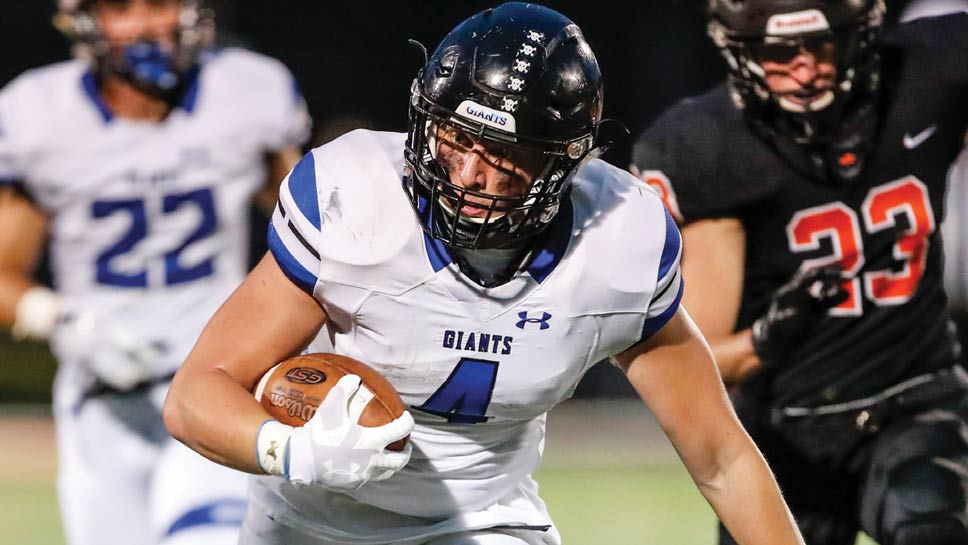 The last thing that Highland Park High School’s varsity football coaches wanted to see in the second half of a game in Schaumburg last month was a severely injured Tommy Motzko making his way from a bench to the sideline.

But the highly competitive Motzko — a 6-foot-2, 220-pound senior middle linebacker/fullback in his third season on varsity — did just that, wincing and hop-hop-hopping on his left leg (to protect his banged-up, ice-bag-wrapped right ankle) during HP’s 25-0 loss to Schaumburg High School’s Saxons on September 14.

The Giant resembled a potato-sack race participant at a picnic — minus a potato sack and minus the use of both legs.

“I didn’t want to miss any more plays,” Motzko says. “I wanted to at least watch our guys compete.”

It’s impossible not to watch South Dakota State University recruit Motzko on Game Nights. The young man could pass for a South Dakota State University junior football player today and battles at an all-Central Suburban League North level on practically every play. He dwarfs most defensive linemen when he rushes his imposing frame up the middle on third-and-short and fourth-and-short plays.  Libertyville High School’s Wildcats might still be smarting from what Motzko did (238 yards rushing, on 38 carries, and four touchdown runs, including three 1-yarders) in HP’s season-opening 28-27 overtime road win August 24.

Motzko’s ferocity on the other side ball also never abates. The tackle machine drops ball carriers with all the gentleness of a bulldozer gone haywire.

“Hard-nosed football player,” first-year Highland Park head football coach David Lindquist says of Motzko, who intercepted a pass on the first play of the game at Schaumburg last month. “He can do good things for you, offensively and defensively. He’s got the athleticism, the size, the speed. Very good football player, tough kid. And he never misses a lift [weightlifting session].”

Motzko displayed his strength and perseverance near the end of an 11-yard rush in the Schaumburg game. One, two, three … eventually five or six, maybe seven, Saxons draped themselves on the churning Giant in a near-futile attempt to gang-halt him. Motzko bounced back up, ran for another yard on the next play and, two plays later, grabbed a handoff from senior quarterback Michael Rooney and racked up 12 more yards.

“Big help, great player, and Tommy’s a solid individual,” Giants senior lineman Matt Cortes says of one of the team captains. “He wants every inch, no matter what, as a running back. The intensity he plays with this year is the same as it was last year and in his sophomore season. He still wants it — wants it more than most football players do.”

Cortes first met Motzko in the sixth grade. Cortes would grow into a 6-1, 324-pound HPHS senior. His first impression of Motzko six years ago?

“I remember being scared of him,” Cortes, cracking a smile, says. “He was scary, but he was also a great guy, a real good kid.”

Motzko, the son of biology teacher John Motzko at rival Deerfield High School, might strike fear in wrestlers from other schools this winter. Motzko has as much experience in wrestling as a newborn does. But that certainly won’t keep Giants varsity wrestling coach Chris Volpe from happily handing Motzko a singlet and grappling headgear and ordering him to become a takedown machine.

“I haven’t told [Volpe] that I’m thinking about coming out for wrestling,” says Motzko, who is also seriously thinking about pursing nursing as a major at SDSU. “I’m too focused on football.

“I love football. I love the physicality of it, the competitiveness involved. I’ve met so many friends and so many good people through football.”

Notable: Highland Park High School’s football team lost 18-6 to host Deerfield High School on October 5. The Central Suburban League North game between 3-3 squads, originally scheduled to start at 7 p.m., started at 5 p.m. instead because of an ominous weather forecast. Giants senior lineman Matt Cortes recovered a Warriors fumble and ran it 15 yards for a touchdown at the 5:10 mark of the third quarter. He stiff-armed a Warrior en route to the end zone. The first time Cortes carried a football in his prep career occurred two seasons ago, when he scored on a two-point conversion attempt. The Giants’ records dipped to 3-4 overall and 1-2 (CSL North) with last weekend’s loss; Deerfield improved to 4-3, 3-0. … HPHS visits CSL North leader Maine West (6-1, 3-0) on October 12 (7 p.m.) and concludes its regular season with a home game against Maine East (0-7, 0-3) on October 19.