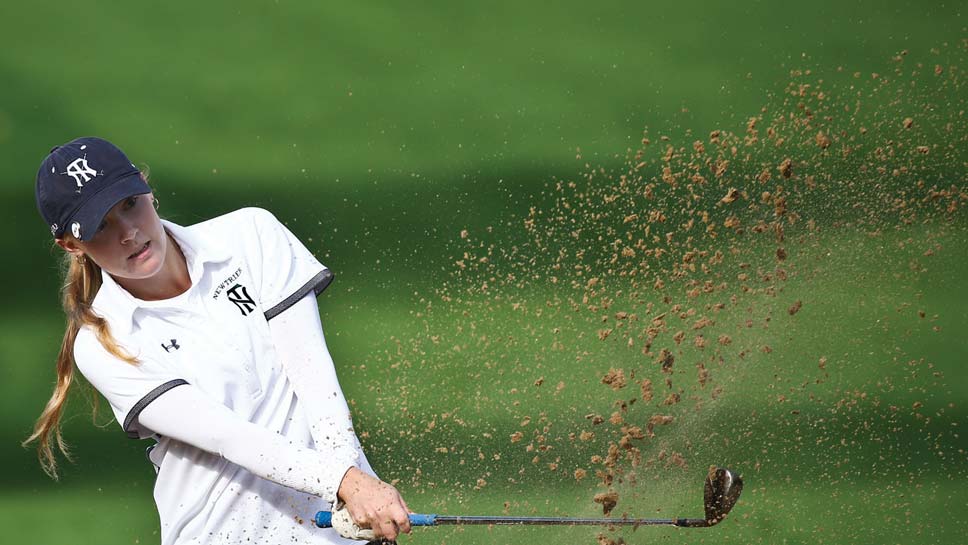 And one of her signature reactions to a golf shot — a shout she’d like to blare only a handful of times each season and one she introduced to teammates in the summer of 2017 — is “Chunky monkey!”

A chunked shot in golf is not a good one. To chunk a ball is to hit it fat, usually at an undesirable distance.

“I’ll never forget when she first yelled that,” NT senior golfer Lizzie Kenter recalls with a laugh. “The two of us were playing a round with Rachel Rhee [NTHS, ’18] in tryouts. Rachel and I had never heard such a phrase. But it sounded funny. Abbie is hilarious, kind of a riot all the time.

Another one of Kaestle’s catchphrases on golf courses has nothing to do with an animal and everything to do with a substance. Kaestle, Kenter says, sometimes yells “Straight liquid!” after a clean, accurate approach shot.

Kaestle’s fluid, consistent game has put the Trevians in a solid position to successfully defend their Class 2A girls golf state championship this weekend at Hickory Point Golf Club in downstate Forsyth.

One of three fourth-year varsity members (with Kenter and reigning Class 2A individual state champion Penelope Tir) on coach Scott Fricke’s squad, Kaestle carded an 82 to tie for runner-up honors at the Loyola Academy Regional at Glencoe Golf Club on October 3. Not bad, considering it was windy and August hot, and Kaestle had battled with a sore throat and achiness — and triple-bogeyed the first hole.

Kaestle and her teammates won the Conant Sectional at Fox Run Golf Course in Elk Grove with a score of 318 on Oct. 8. Tir’s 73 topped the field.

“Abbie has been playing consistent golf all season,” Fricke says, adding two of Kaestle’s best rounds to date came at the Decatur Invitational (77) on September 15 and at the Champaign Invite (78) two weeks later. “Strong [250-275 yards] off the tee. Abbie hits bombs, crushes the ball off the tee; she’s known for excelling in that part of the game. But she has improved her short game. She plays with poise and expects to do well.

“The younger players on our team look up to Abbie, a gamer, and think, ‘I want to be like that, like a player who works hard on her game and does what’s necessary in the summer to be ready for the fall.’ ”

Mike Kaestle introduced his daughter to golf when Abbie was a fifth- or sixth-grader. She became a serious golfer by the time she entered the eighth grade. The summer after eighth grade was when she first defeated her father, in a nine-hole round.

“As soon as we finished the round, he wanted to challenge me to a putting competition,” recounts Kaestle, a co-captain who tied Glenbrook South senior Hanna Tanaka for runner-up honors at the Central Suburban League South Tournament at Wilmette Golf Course on September 26. “I told my dad, ‘No, no, no. I’m going to [savor] this for as long as possible.’ ”

Abbie Kaestle certainly relished the Trevians’ state championship last fall after having shot 78-77 to finish in a tie for 30th place overall and in a tie for third (with Kenter) among teammates. Kaestle had helped NT’s previous two teams place fifth at state.

“I like golf because I’ve always liked being outside around nature, around animals,” Kaestle says. “Too many people these days stay inside for too many hours, mostly because they want to be close to technology.”

But Kaestle, who has been interested in science and medicine for years, does find the time to do important work under a roof — at Northwestern University. Since last December, for up to three days a week during the school year (except during golf season), she has helped professors conduct Alzheimer’s disease research.

“She’s incredibly smart,” Kenter says. “I know. We were in the same chemistry class.”

She incredibly outgoing, too. Fricke knows. His Trevians know.

“Abbie,” the coach says, “has a great sense of humor. When you talk with her, she’ll make you laugh a little bit. She knows when to have fun. She knows when to be serious. I’m going to miss her consistency as a golfer next year. I’ll also miss how great she was as a teammate. Good kid.

“There’s a lot to like about Abbie,” Fricke adds.