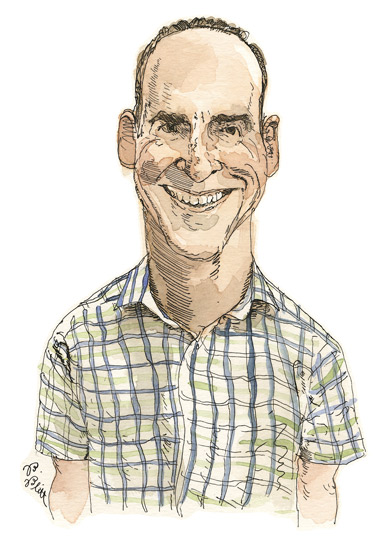 Brad Hokin was a junior safety/running back/punt and kick returner on the varsity football team at Highland Park High School in 1980. Only two seasons earlier, he weighed a little more than the combined weight of the football uniform and gear he wore on Game Days.

“I was one of the smallest players back then, easily,” recalls the fit 6-foot, 195-pound Hokin, a 54-year-old who had ordered the entire right side of the menu and part of the left at Walker Bros. Original Pancake House in Highland Park (slight exaggeration; Mr. Hokin actually ordered iced tea, a Mediterranean omelet sans olives, turkey sausage, hash browns and a side of buckwheat pancakes).

“I never stopped working hard to get better at football,” the Skokie resident adds. “And there I was, starting and playing varsity football for my school in the opener against Morton High School. My hard work was rewarded. My head coach [Jay Geerdes] and defensive coordinator [Bill Bodle] rewarded me with playing time.

Hokin — now a running backs/defensive backs coach at Glenbrook North High School, following prep coaching stints at Niles West High School (2009-16) and at his alma mater (in 1986, as the Giants’ freshman ‘B’ football coach) — proved he belonged on the football field that day and ended up a two-time all-Central Suburban League player. His confidence grew with each quarter. His grades? They soared, too, with each semester.

“That feeling I experienced in that game, in that season opener, is one I want all of the players I coach to feel at some point,” Hokin adds.

Hokin launched his company, Glory Days, in 1997, and still runs it in between Spartans football practices and games. It sells bottled water to between 30-40 Illinois high schools, with each bottle featuring a label depicting the school’s sports nickname.

He suited up for four seasons at Boston University, becoming an All-American defensive back and an Academic All-American. In a game against Maine, Hokin recorded two interceptions, two sacks and 12 tackles. He was like the turf on that day — everywhere. USA Today recognized the Giant-turned-Terrier’s monster game against the Black Bears. The Orlando Renegades of the United States Football League drafted him. But BU’s 1985-86 Student-Athlete of the Year and owner of a 3.8 grade-point average played exactly zero downs for the Renegades, coached by current ESPN college football broadcaster Lee Corso.

The USFL folded before the start of the 1986 season.

Hokin coached gridders at Dartmouth College and at the University of Massachusetts in his early to mid 20s, before he could no longer douse his desire to play competitive football again.

“I was 25, and I had an agent who contacted professional Swedish football teams for me,” Hokin says.

The MalmÖ Griffins of the Superserien American football league in Sweden named Hokin a player/coach. He earned Coach of the Year honors and guided the Griffins to the Swedish Super Bowl. A serious injury in the fourth quarter of that game forced Hokin to retire as a player.

“I also got the sports radio bug,” says Hokin, alluding to his time with “WMAQ Sports Huddle”.

But the loves of his life today are, in order, his parents; his wife of nine years, nurse practitioner Jacquie Toia, who met her future groom while working out at a health club in Chicago; his core group of friends; and his opportunities to coach football practice four days per week and coach during a football game once a week each autumn.

“My wife is the rock star of our family,” insists Hokin, whose family also includes a three-legged dog named Bernie and three cats. “I love her drive, her intelligence, her honesty. She is very, very driven.

Hokin’s close friends today — Joey Resnick, Steve Mandell, Dave Mayber, Tom Ivey and Danny Wilk — were his close friends in high school. How many 50-somethings are able to claim that?

“Most coaches coach because they’re interested in developing meaningful, productive relationships with student-athletes,” Hokin says. “I’m one of those coaches. There’s nothing like getting a kid, through a sport, to believe in himself and then watching him put that confidence to use in other areas of his life.

“But athletes, for the most part, play sports to have fun and compete in games with their friends,” he adds. “You can never lose sight of that. Decades from now, they’re not going to remember their teams’ season records or details like that. They’re going to remember what was said or what happened on the bus ride to a road game or a funny thing that happened in a practice, like Coach Hokin falling down.”

Hokin later clarifies one of his thoughts.

The coach smiles and fork-stabs his stack of pancakes.

Life is good for Brad Hokin. No, great. He’s doing what he loves to do and changing young lives for the better along the way.

You get one guess.