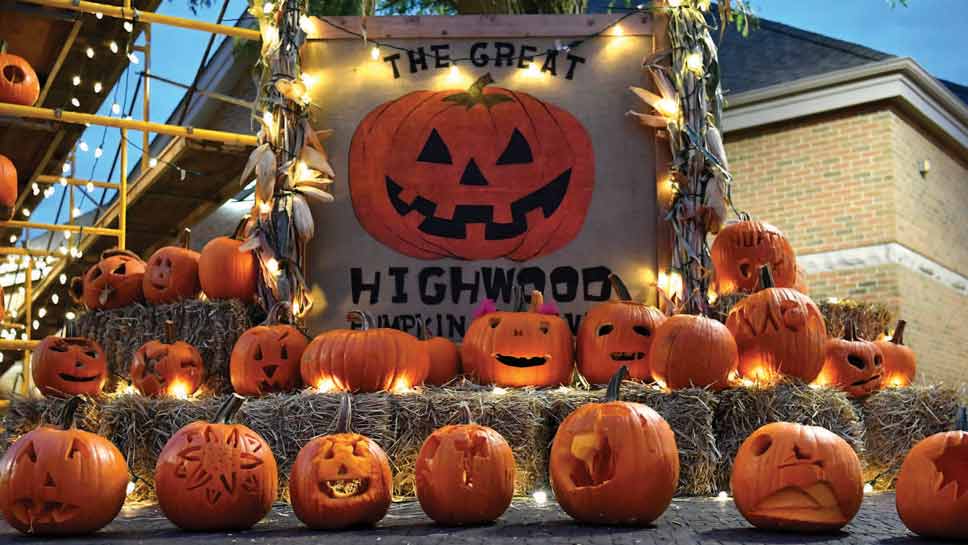 Don’t tell ComEd, but the city of Highwood plans to save on its electrical bill — by lighting up the downtown with pumpkins.

On the evenings of October 5-7, the city will turn off the electricity in downtown Highwood for about ten minutes to showcase thousands of lit jack-o’-lanterns.

The intentional outage is part of the 9th Annual Great Highwood Pumpkin Festival. Since 2010 the festival has attempted to break the Guinness Book of World Records for largest display of lit jack-o’-lanterns.

“That’s what people come for,” says Eric Falberg, founder of the Highwood Pumpkin Festival. “They want to see everything up and lit.

“It looks like a city of pumpkins,” he adds. Prior to moving to Highwood and becoming an alderman, Falberg lived in Vermont, not far from Keene, New Hampshire. Keene holds the world record for the largest display of lit jack-o’-lanterns — 30,581 carved pumpkins, according to the Guinness World Records website.

Highwood, in 2009, had been holding a yearly Harvest Festival. The name of the event didn’t excite Falberg.

“[Harvest Festival] sounded like every other festival,” Falberg says. “I wanted to bring [Pumpkin Festival] to Highwood.”

“Now we could do 1,000 pumpkins, blindfolded,” Falberg says.

In 2010 the city made its first attempt to break the Guinness record, ending up with 26,000 carved pumpkins. At the 2017 Highwood Pumpkin Festival, 21,243 jack-o’-lanterns were displayed on 30-foot tall scaffolding in front of city hall.

Celebrate Highwood, which organizes the Great Highwood Pumpkin Festival, has ordered more than 20,000 pumpkins for the 2018 festival. Visitors can carve those or BYOP (Bring Your Own Pumpkins) and skip the $3 a day or $5 festival admission fee.

Celebrate Highwood has tried and disposed of a few activities through the years. One of them, The Pumpkin Land Regatta, where participants raced 200-300 pound pumpkins 150 yards in dollies, won’t be held next month.

“The event got too crowded to run that,” Falberg says.

Pumpkin-seed spitting, the corn maze and an attempt at the Guinness record for most pies in a row also disappeared.

This year the festival has added a fourth music stage, along with military vehicles — courtesy of the U.S. Marines. Look for excited children to mount the immobilized, armor-plated machines.

The attempt to break the Guinness record is scheduled for October 7 at 7:10 p.m.. Pumpkin carvers, however, are welcome to gouge and sculpt October 1-4 before the festival starts.

The Highwood Pumpkin Festival attracts an estimated 70,000-90,000 people, says Donna Walker of Celebrate Highwood. To put that in perspective, Highwood’s population is 5,377, according to a 2015 U.S. Census estimate.

Money raised by the festival goes to Make-A-Wish Foundation. The festival generated $60,000 at each of the last two Pumpkin Festivals.