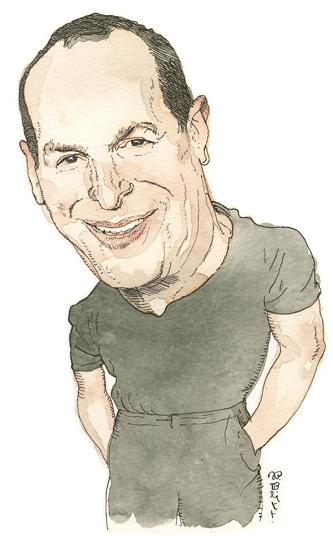 Third-generation restaurateur Doug Roth has a college-aged stepdaughter named Hunter. But he has never been a fan of the word “stepdaughter.”

“I call her my bonus daughter or daughter 2.0,” says the 63-year-old Roth, who married his best friend, Jennifer, more than five years ago and has twin sons, 26-year-olds Jonathan and Justin, from his first marriage. Jonathan is a United States Coast Guard service officer; Justin is a product specialist with Volkswagen/Audi.

Doug Roth 2.0 was born in 2000, the year in which he chose to end his partnership with restaurateurs Larry and Mark Levy at the highly successful Bistro 110 on Pearson Street in Chicago.

“I had to reinvent myself at that point in my life,” the 1973 New Trier East High School graduate and Glencoe resident says from a seat at Walker Bros. Original Pancake House in Highland Park, where he ordered three poached eggs, a half of a grapefruit, crispy bacon and an English muffin.

“Mark and Larry,” he adds, “were fabulous partners. It was a tremendous experience, my time with Bistro 110. People always ask me, ‘When are you going to open another Bistro 110?’ ”

Roth — the son of the late Don Roth, a restaurant industry icon who ran the show at Don Roth’s Blackhawk in Wheeling, and the grandson of the late Otto Roth, who opened The Blackhawk in Chicago in 1920 — has been busier and more productive than ever in the second phase of his professional life. He is founder/president of Playground Hospitality, an innovative consulting venture that helps restaurants stand out, stay relevant and maintain their unique character. A restaurant finding its soul — essence, not the food — is as critical as a restaurant providing consistency for its diners. A Tulane University graduate with a degree in economics, after setting out to major in pre-med, Roth is also working with deans at his alma mater in New Orleans to launch an entrepreneurial hospitality program.

“Can you believe New Orleans, with its reputation for wonderful food and restaurants, does not have an A-plus hospitality program?” an incredulous Roth says. “My endeavor at Tulane has a lot do with getting full value back from a college education.”

Given the enduring spirit behind Roth’s Playground Hospitality enterprise, students in entrepreneurial hospitality classes at Tulane will find themselves spending more time outside the traditional classroom setting than they will in it.

“A typical university environment emphasizes textbooks, technology. Very dry,” Roth says. “Playgrounds and camps are settings I found fun and much more energetic than time spent in a chair, listening to lectures. When you’re a kid, in a sandbox, you’re learning to play well, build things, interact with others.

“I’m back in a ‘playground’ today, and I’m having a good time, giving back.”

Patrons at Grandpa Otto’s Blackhawk in the first half of the 20th century returned for the music performed at the restaurant as much as they did for the edible fare. Mel Tormé sang there regularly. Doris Day made her first appearance at The Blackhawk with Bob Crosby and the Bobcats in 1940. Bob, younger brother of Bing, wrote the song “Big Noise from Winnetka” there. Chico Marx, of the Marx Brothers, and his orchestra entertained there.

The restaurant later became known for its spinning salad bowl, a staple Don Roth brought to his establishment in Wheeling. Don Roth’s Blackhawk opened in 1969 and closed in 2009.

“My dad,” Doug Roth says, “created steakhouses long before their time. He had an uncanny ability to forecast dining trends and understand what people wanted before they knew what they wanted. He had a marvelous sense of humor. He was beloved by his employees. He was extremely ethical — one of the most important traits he possessed. I, too, would like to think I have that trait.

“When you have a successful parent, like my father, it can be daunting. I followed in my dad’s footsteps, but I did it differently; I chose a different road map. You can figure out other ways to do things in an industry and still find success.”

Doug’s mother, Ann, died late last year at the age of 95. She enjoyed attending operas and symphony concerts and going out with her friends every Saturday night.

“My mom was beautiful, inside and outside,” her son says. “She was extremely well-read and bright. She epitomized what it meant to be a true lady. Having recently gone back to her small hometown [in Mississippi], a visit that gave me a better understanding of who she was, I am looking to create something in her honor. Maybe something related to the high school she attended.”

Doug Roth was a board member of Honor Flight Chicago for seven years. The organization flies war veterans to Washington, D.C. for a day of honor. His father served as a lieutenant in the United States Marine Corps in World War II. He is active with the SD Gunner Fund, which was created to assists veterans and disabled children with the financial expense of owning service animals. The Maine-based Travis Mills Foundation is a nonprofit that was formed to benefit wounded veterans and their families. In 2017 Roth joined chefs from Chicago and the East Coast in Maine “to create an incredible culinary experience” for ailing (physically and mentally) veterans of the conflicts in Afghanistan and Iraq.

“The idea was to provide a ‘wow’ experience for the veterans,” Roth says. “We did that. They had never experienced anything like it. We took pictures of veterans. Also in the pictures were Tomahawk steaks and bottles of Dom Pérignon.”

Today he bikes and swims and hits the weights. He’s a straight shooter, a man who believes if you’re going to do something, anything, do it the right way or move on to something else.

Roth is in a good place — make that, a good ‘playground’.

“I am looking forward to playing in this ‘playground’ for quite a while,” he says. “End of story.”